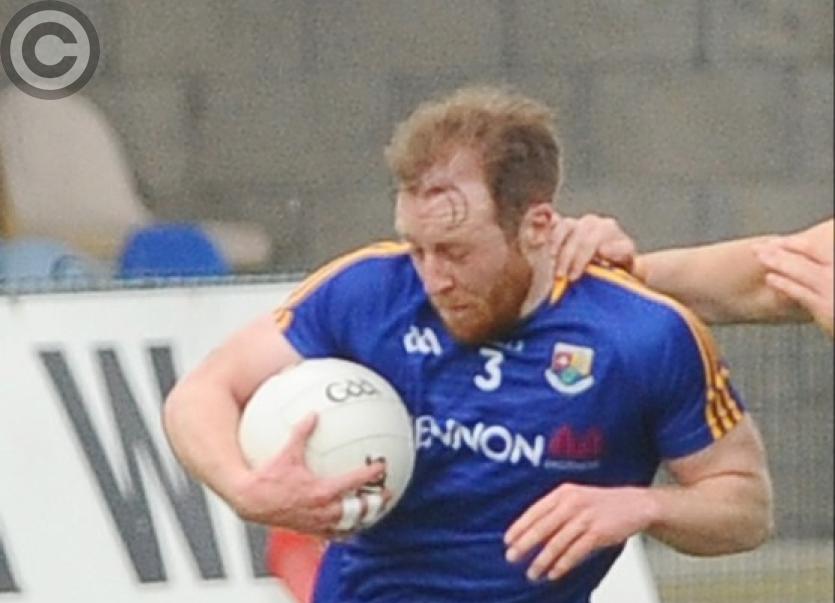 Losing inspirational defender Padraig McCormack (pictured) to a black card in the 53rd minute was a big blow for Longford against Kildare.

Longford were denied another notable upset in the All-Ireland Senior Football Championship Qualifiers as Kildare produced a strong finish to eventually emerge victorious in a very exciting encounter at Glennon Brothers Pearse Park on Saturday.

But it could have been a different story for the gallant losers who were so unlucky not to score a couple of goals in the first half when shots from Liam Connerton (22nd minute) and Donal McElligott (31st minute) struck the crossbar.

So Longford had to be content with a slender 0-9 to 0-8 lead at the break when they should have been further in front but they stuck with a fancied Kildare side right up until the bitter end in a pulsating game.

An attendance in the region of 6,000 witnessed a ding-dong battle played in perfect conditions on a glorious sunny evening and the underdogs Longford were never headed until the 69th minute when Kildare centre-half-back Eoin Doyle surged forward to fist the ball over the bar.

Making good use of their substitutes who were sprung from a stronger bench, Kildare had finally taken the lead in the tension packed closing stages and Longford then wasted a great chance of the equaliser in stoppage time as a David McGivney free dropped short into the arms of the opposing keeper Mark Donnellan.

The lengthy additional time stretched out for a total of nine agonising minutes and after Kildare extended their advantage with a cracking point from their last replacement Kevin Feely (who was unable to start due to injury), a brilliant move yielded a goal from another substitute Chris Healy.

That killer blow was struck in the sixth minute of stoppage time and the drama was not over yet as Kildare were reduced to 14 players when defender Peter Kelly was sent-off after receiving a second yellow card.

There was still time for Robbie Smyth to fire home a well-taken goal in the eighth minute of stoppage time to give Longford a glimmer of hope but Kildare made sure of their place in Round 3 of the All-Ireland Qualifiers with a point from Paul Cribben.

Forced to field without the suspended James McGivney, along with injured duo Rian Brady and Ronan McEntire, Longford suffered another setback when the inspirational Padraig McCormack was dismissed for a harsh black card with 53 minutes gone on the clock and it was just not meant to be for Denis Connerton’s bravehearts on their exit from the All-Ireland Championship.