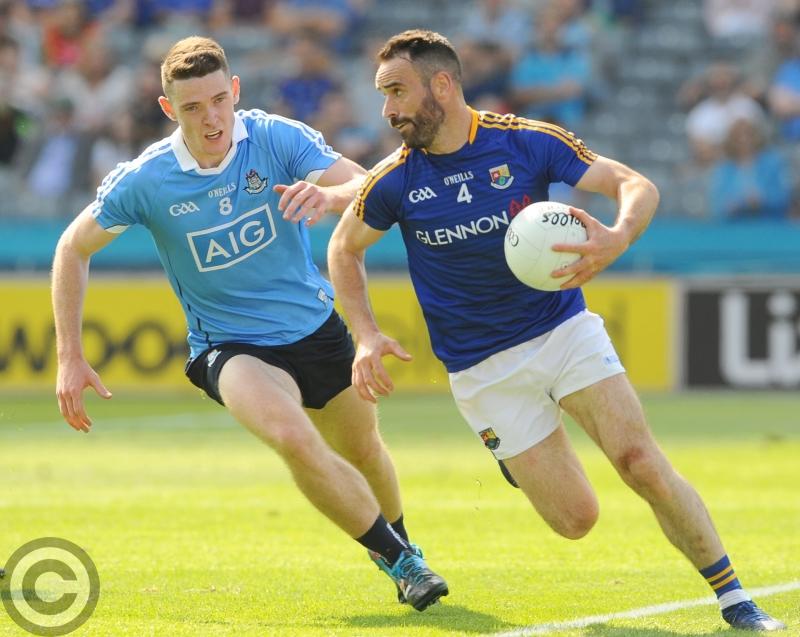 Longford defender Diarmuid Masterson on the ball in his attempt to evade the challenge of Dublin midfielder Brian Fenton. Action from the Leinster SFC semi-final at Croke Park. Pic: Declan Gilmore

While much has been made about the straight red card for James McGivney who was punished for a rather reckless challenge on Dublin goalkeeper Stephen Cluxton with 22 minutes gone in the first half, Longford found the going far too tough against Dublin at Croke Park on Sunday last.

Appearing in the Leinster Senior Football Championship semi-final for the first time in 30 years it was a great occasion for the current Longford squad but the all conquering three-in-a-row All-Ireland champions are clearly in a different class as they ended up winning by the wide margin of 19 points, aided by the advantage of the extra man.

Everything needed to go right for the underdogs but they were guilty of making some silly mistakes, along with kicking a total of ten wides, and the dismissal of James McGivney was obviously a severe setback whether it was a harsh decision or not.

The large contingent of Longford supporters in the official attendance of 39,028 were not very happy with Laois referee Maurice Deegan when he choose to ignore the robust blow inflicted by Jonny Cooper on Dessie Reynolds in the 31st minute and a red card should also have been issued on this occasion to the Dublin defender.

But at the end of the day it must be said that brave Longford were never going to trouble a super squad who were in a position to introduce a few more class acts from their awesome array of substitutes in the second half on their way to a most emphatic victory.

Even ‘hawkeye’ was against Longford on Sunday last with disputed scoring attempts from Darren Gallagher and David McGivney (free) in the second half ruled to be wide.

And in another setback Michael Quinn received a hardly warranted black card for preventing Ciaran KIlkenny from scoring a goal in the second half with the unfortunate Killoe man replaced by Barry Gilleran in the 56th minute.

Despite a gallant display by the 14 men of Longford in fighting a losing battle and who played quite well at different stages of the game, this was a real gulf in class with Dublin going very close to scoring a third goal in several extremely dangerous attacks in the second half.

Denis Connerton must now lift the players for the All-Ireland Round 2 Qualifier at home to Kildare on Saturday week and hopefully the injury situation will improve with Ronan McEntire, Barry McKeon and Andrew Farrell all unable to feature against Dublin even though they were listed among the substitutes.

The wonderful win over Meath, who were so unlucky to lose against Tyrone last weekend, proves that Longford are capable of competing with most of the teams and it is no disgrace that they crashed against the Dublin juggernaut who are such a formidable force and particularly so in the wide open spaces of Croke Park.

To their credit Longford were competitive in the early stages of the game and were just a point behind (0-4 to 0-3) with eleven minutes gone following cracking scores from Robbie Smyth and defenders Michael Quinn and Donal McElligott who surged forward to shoot over the bar.

But Dublin gradually asserted their superiority to establish a comfortable 0-8 to 0-3 lead with their scores coming from Philip McMahon (who also fumbled a goal chance), Con O’Callaghan, Ciaran Kilkenny, Paddy Andrews, Dean Rock (2), Brian Fenton and wing back Brian Howard.

Robbie  Smyth (free) pulled a point back for Longford before Dublin defender Eric Lowndes shot wide in a goal attempt but the Sam Maguire kingpins eventually found the back of the net in the 19th minute when Michael Darragh Macauley broke through to set up Rock for a decisive score from a few yards out.

Things went from bad to worse for Longford as after James McGivney was sent-off another Dublin point followed from Con O’Callaghan and then they scored a second goal with Paul Mannion blasting the ball to the back of the net in the 24th minute to punish a mistake.

Longford now trailed by 2-9 to 0-4 and Daniel Mimnagh then had a goal attempt blocked with Rian Brady shooting wide in this same attack.

Dublin added another four points to their tally through Paul Mannion (2), James McCarthy and Brian Fenton to hold a very commanding 2-13 to 0-7 lead at the break with another brace from Robbie Smyth (the second of which was a great strike) and a well struck ‘45’ converted by keeper Paddy Collum accounting for the other Longford scores in the first half.

Despite the big 12 points gap and the numerical disadvantage Longford produced a spirited performance in the second half to register another five scores .

Robbie Smyth (free), Dessie Reynolds (a fine effort), David McGivney (free), substitute Sean McCormack and Rian Brady were on target, the latter landing the last point for the midlanders in the 54th minute when they were a quite respectable 2-16 to 0-12 behind before they eventually faded.

The mighty Dubs only managed three scores in the third quarter with Dean Rock converting a free, along with a brace from Colm Basquel, but moved up another couple of gears to completely dominate the final quarter.

Nine points in a row were registered by Dean Rock (three frees), Ciaran Kilkenny (3), Brian Fenton (2) and Niall Scully as Dublin ran out very easy winners in the finish but hopefully Longford can learn from the valuable experience of taking on the best team in the country.