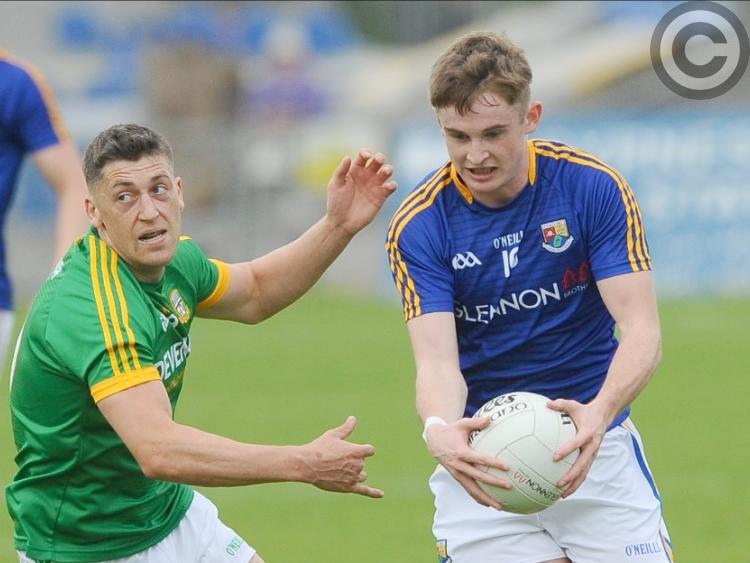 In producing a terrific team effort the outsiders Longford scored a famous victory over Meath to reach the Leinster Senior Football Championship semi-final for the first time in 30 years,  much to the sheer delight of the home supporters in the official attendance of 5,591 who crammed into Glennon Brothers Pearse Park on Sunday last.

Make no mistake about it, this was a richly deserved surprise success for Longford in perfect conditions at the splendid looking county grounds and most of the renovated stand at the far side of the pitch was open to witness another upset in the provincial series this season.

Longford’s reward is a crack at Dublin in the last four clash at Croke Park on Sunday June 10 with the rampant All-Ireland champions cruising to a runaway 4-25 to 1-11 win over Wicklow in the remaining quarter-final last weekend.

So for the first time in a sixth season in charge of the county senior footballers there was joy for Denis Connerton who is celebrating a first ever win in the Leinster SFC Championship during his time as manager and he must have been thrilled with the so determined manner in which his players stood up to the task in producing a great display against a fancied Meath side.

Deadlocked at 0-7 apiece at the break with both sides squandering clear-cut goal chances in the first half, Longford stepped up another gear on the changeover and established a fairly comfortable 0-14 to 0-10 lead thanks to points from Dessie Reynolds, Darren Gallagher, James McGivney (2), David McGivney (free), Daniel Mimnagh and Robbie Smyth.

Meath were rattled and they suffered a serious setback in the 55th minute when left-half-back Shane McEntee received a straight red card for a robust challenge on Rian Brady.

When a speculative long range kick from Conor Berry hopped over the bar in the 58th minute there appeared to be no way back for the 14 men of Meath but they showed a lot of character in a spirited revival to close the gap to just a solitary point (0-15 to 0-14).

The four scores in a row came from Donal Lenihan (free), defender Sean Curran and substitutes Eamon and Joey Wallace and with 68 minutes gone on the clock it looked like Longford were about to let the game slip from their grasp.

The most exciting finish provided a lot of nervous tension, particularly for the home followers, and were it not for a brilliant point-blank save by Paddy Collum to deflect a goalbound shot from Eamon Wallace over the bar in the 65th minute it might have been a different story.

Having said that, James McGivney missed a glorious chance of a goal for Longford in the first minute of stoppage time when his shot was cleared off the line by Meath full-back Conor McGill but moments later a terrific strike from substitute Sean McCormack clinched a first win over Meath in the Leinster SFC since 1982.

So the Longford supporters, who really got behind their team at Pearse Park on Sunday in stressing the importance of home advantage, can now look forward to a trip to Croke Park in a couple of weeks time to watch their county in action against Dublin and on the same bill is the other semi-final between Laois and Carlow, the latter scoring a shock win over Kildare.

There were many Longford stars on this memorable occasion and particularly impressive in attack were James McGivney and Darren Gallagher who fired over seven points between them.

Conor Berry was also much to the fore around the middle of the field while commanding defender Diarmuid Masterson provided tremendous inspiration when the going got really tough in the second half.

The powerful Masterson received strong support from Daniel Mimnagh as Longford surged forward in search of the vital scores on their way to winning the match.

Regardless of what happens against the red hot All-Ireland title favourites Dublin, this was a success to savour even if Meath are far from the force of old and the Longford players deserve great credit for crossing the first hurdle in Leinster.

There was nothing separating the sides in the first half with Longford possibly denied a penalty when Ronan McEntire, through for a goal chance in the 12th minute, was stopped in his tracks by a strong challenge from the Meath keeper Andrew Colgan.

A couple of minutes earlier James McGivney blasted a goal attempt just over the bar but Longford then survived a few very lucky escapes in quick succession.

Meath defender Donal Keogan shot wide when looking all set to find the back of the net in the 19th minute and there was another glaring miss when Cillian O’Sullivan failed to hit the target from close range along with a very bad wide from Bryan McMahon when a goal was on.

A draw was a good enough outcome at half-time as Longford had shot a total of six wides but they did land some excellent points, a brace apiece from James McGivney (opening the scoring in the 5th minute), Rian Brady and Darren Gallagher while keeper Paddy Collum fired over  a well struck ‘45.

Midfielder Paddy Kennelly fisted the ball over the bar for the first Meath score in the 7th minute and a further six points followed through Graham Reilly (2), Ben Brennan, Donal Lenihan (free), Kennelly and Bryan Menton as the sides ended up all square at half-time.

Whatever Denis Connerton said in the dressing room during the break certainly had the desired effect as Longford made a great start to the second half with a point apiece from Dessie Reynolds and Darren Gallagher in giving the home county great belief.

While Graham Reilly replied for Meath, a brilliant long range strike from James McGivney in the 44th minute put Longford back on the front foot and his younger brother David then converted a free from a tight angle.

Scores were exchanged between Donal Keogan and Daniel Mimnagh (a great kick from near the sideline) before Mickey Burke was on the mark for Meath in the 51st minute.

There was then another goal chance for James McGivney in the 54th minute when he blasted the ball over the bar for a disputed point and after Robbie Smyth got his only score moments later Longford were leading by 0-14 to 0-10.

That was increased with a point from Conor Berry and while Meath, despite the numerical disadvantage when Shane McEntee was sent-off, outscored Longford 0-4 to 0-1 during the remainder of the match they were unable to avoid a disappointing early exit from the Leinster Championship much to the dismay of their stunned supporters.