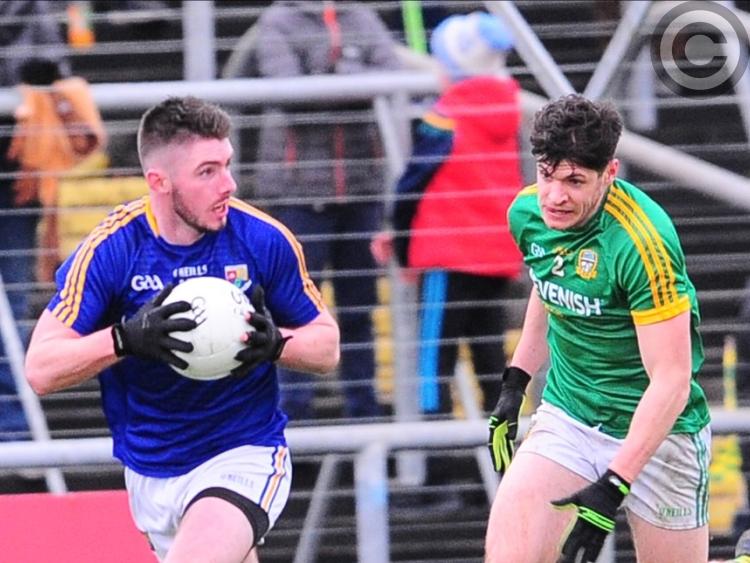 Robbie Smyth on the attack for Longford in breaking away from Meath defender Seamus Lavin. Action from the O'Byrne Cup semi-final at Pairc Tailteann, Navan back in January. Photo: Declan Gilmore

On the evidence of a most encouraging campaign in Division 3 of the National League that almost yielded promotion, there is a growing belief that Longford have a good chance of beating Meath in the Leinster Championship and particularly so with the big boost of home advantage.

Glennon Brothers Pearse Park is the venue for the eagerly awaited quarter-final clash this Sunday (throw-in 3pm) and while a number of injury problems are causing considerable concern for Longford manager Denis Connerton the team that takes the field will be quietly confident of springing a surprise.

There is some good news as long term casualty Sean McCormack  was back in action against Cork in a challenge game last week, one of the substitutes introduced in the six or seven points defeat.

McCormack may feature at some stage against Meath but the probable absence of the versatile Barry McKeon (hamstring) is a significant setback.

Those unfortunate  injuries have made the Longford task of progressing a stage further  in the provincial championship that much tougher but on a positive note Liam Connerton has recovered from the cruciate injury that kept him out of action for several months.

Connerton missed the entire National League but is now back in contention for a place in the attack which clearly has the ability to make a major impact against Meath.

While the quick Dessie Reynolds made his mark in the recent challenge games against Cavan and Kildare, the main man is Robbie Smyth who is always a potential matchwinner with his quality scoring prowess.

Conor Berry and James McGivney are also capable of posing problems for the Meath defence while much will depend on the battle for midfield supremacy with the powerful Darren Gallagher going all out to make his presence felt in this vital sector.

Michael Quinn is another key figure on the Longford team, operating effectively in the defence alongside other experienced players in Padraig McCormack, Diarmuid Masterson, Barry Gilleran and the captain Donal McElligott.

Promising newcomer Rian Brady could start in the forward division and while Longford will be hoping to reach the semi-final against Dublin or Wicklow at Croke Park on Sunday 10 June, they are facing a difficult task against Meath.

Despite their struggle in Division 2 of the National League this season when they had to win their last two games against Down and Louth to avoid relegation, there were positive performances in the draw away to Roscommon along with the most emphatic 0-21 to 0-7 win over Clare in Navan.

While Meath manager Andy McEntee must have been frustrated with the inconsistency shown in the league defeats away to Cavan and Tipperary and another setback at home to Cork, he will have been pleased with the impressive manner in which they beat Down 4-14 to 1-14 in the relegation battle at Pairc Tailteann.

That was probably a true reflection of the actual potential of the current Meath squad who also showed some glimpses of what they are capable of in the dramatic O’Byrne Cup semi-final back in January which ended in a high scoring draw, 1-19 to 2-16, after extra-time.

History was made in Navan that day in the first ever GAA football fixture to be decided in a free-kicks shoot-out as Longford unfortunately lost 2-1 and Meath went on to win the delayed O’Byrne Cup final against Westmeath which was eventually staged in Mullingar a couple of weeks ago.

Getting a competitive fixture so close to the championship was a boost for Meath who scored a comprehensive 4-13 to 1-13 win at Cusack Park despite ending up with 13 players on the pitch.

Midfielder Paddy Kennelly was sent-off for a second yellow card offence in the first half (25th minute) while second half substitute Eamon Wallace received a straight red card in the 62nd minute.

And still Meath won with considerable comfort and it could have been even worse for Westmeath (minus star player John Heslin) but for a number of fine saves by their goalkeeper Stephen Gallagher.

So the Royal county will be coming into the championship clash against Longford in a confident frame of mind and most impressive in the win over Westmeath was lethal corner-forward Donal Lenihan who clocked up the tremendous total of 2-8 (4 frees) in causing havoc.

With other quality attackers in Cillian O’Sullivan and Graham Reilly who are also a serious threat, there is plenty of scoring power in this Meath team while influential captain Bryan Menton will be leading the charge at centrefield and will prove difficult to contain in the quest to win vital possession.

The general opinion is that Meath are a physically stronger side than Longford and things could get very tough in the heat of the championship battle.

Conor McGill will command the full-back position while the regular Meath centre-half-back Donal Keogan is a highly rated defender who will probably be flanked by James McEntee and Shane McEntee who are also competent players.

Having said that, the sharp Longford attack will be putting the pressure on to expose flaws in the Meath defence who conceded a lot of scores in the National League and a most intriguing contest is in prospect as the counties clash in the Leinster SFC for the first time since 1995.

23 years ago a powerful Meath team cruised to a very easy 4-15 to 0-10 win in the quarter-final watched by a 7,000 attendance at Pearse Park but a lot of things have changed since then with Longford football in a far better place and thus the talk of a possible upset on Sunday next.

A good start is most important against Meath (far from the force of old) and as the current crop of ‘Royals’ will be wary about the challenge they face in the often intimidating Pearse Park atmosphere ignited by the expected large Longford support, the opportunity is there for the county to cause a significant stir  in the quest to qualify for the last four of the Leinster SFC for the first time since 1988.