Longford and Meath clash in the Leinster Senior Football Championship 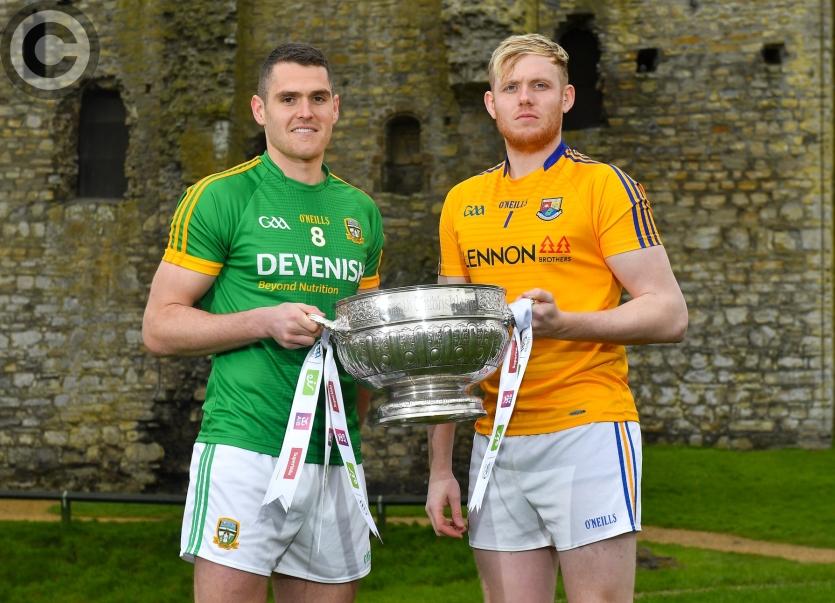 Meath midfielder Bryan Menton pictured with Longford goalkeeper Paddy Collum along with the Delaney Cup at the recent launch of the 2018 Leinster SFC at Trim Castle. Pic: Harry Murphy/Sportsfile

After showing a lot of promise in the National League this season, the Longford senior footballers are facing a real moment of truth in the match that really matters against Meath at Glennon Brothers Pearse Park on Sunday next, throw-in 3pm.

With the big boost of home advantage in the Leinster SFC for the first time since they beat Offaly in the opening round back in 2014, there is a growing belief that the current county team ‘stand’ a good chance of progressing a stage further in the provincial championship.

On the clear evidence that Meath are far from the force of old and struggled to avoid relegation in Division 2 of the league this season, Longford are quietly confident in their quest to cause an upset despite the fact that the opposition have been operating at a higher level.

While manager Denis Connerton is hoping to guide his native county through to the Leinster senior football semi-final for the first time in 30 years, the general opinion is that Meath are a physically stronger side and things could get very tough in the heat of the championship battle.

There is some good news for Longford as long term casualty Sean McCormack was back in action against Cork in a challenge game last week, one of the substitutes introduced in the six or seven points defeat against the Munster county.

Experienced forward McCormack may feature at some stage against Meath but the probable absence of the versatile Barry McKeon (hamstring) is a significant setback in the battle for a place in the last four against the reigning All-Ireland champions Dublin or Wicklow at Croke Park on Sunday 10 June.

Tickets are on sale for the eagerly awaited Longford v Meath game at selected Supervalu and Centra Stores and can also be purchased at the Pearse Park office. Family tickets are available while the general admission prices are as follows: Stand - Adult €20, Children €5. Terrace - Adult €15, Children €5. Concessions for OAP’s, Students and Group Passes.

Read the big match preview in the Longford Leader