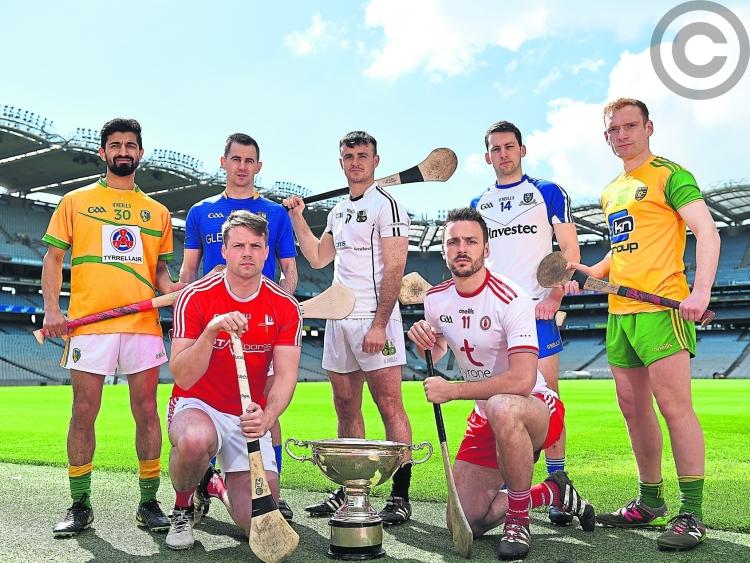 In attendance at the recent launch of the Nicky Rackard Cup in Croke Park were players from the seven participating counties including Longford hurler Patrick Walsh. Photo: Sam Barnes/Sportsfile

Longford senior hurling manager Colum O’Meara is an optimist but looking ahead to the start of the Nicky Rackard Cup he is also a realist as he has a number of injuries to contend with ahead of the opening game in the championship against Monaghan at the Inniskeen grounds this Saturday, throw-in 4.30pm.

Conor Gallagher, Gerard Moore, Seamus Hannon, Joe O’Brien and Cathal Mullane are all carrying injuries and O’Meara is hoping to have some available for Saturday’s game.

“We have Monaghan in the first match and they beat us in the league by a few points. If we have everyone we will be confident that we could beat them this time. We are plagued with injuries but hopefully we can get a few lads back for the game.”

Due to the injuries the Longford boss has given young players the opportunity to impress in challenge games and some could get a chance against Monaghan. “We had a run out in challenge matches and a few lads stood up to the plate. They could get their chance in the championship.”

Galway native O’Meara wears his heart on his sleeve and is very much a hurling man. He did not  realise how tough the Longford job was going to be working with a small but dedicated pool of players.

“I did not realise it to be totally honest. Football, in a good way, is number one in Longford and no point saying it’s not. I think we have only three lads playing hurling who do not play football.  There are only over 60 hurlers in Longford so we are working from a small base.”

Longford are in Group 1 of the Nicky Rackard Cup along with Monaghan, Warwickshire and Louth and are familiar with all three teams having played them in the National League this season.

Although Longford did not win a game in Division 3A and were relegated O’Meara took positives out of the league campaign.

“I know we failed to win any games in the league but we were competitive up to a certain stage when the challenge fell away.

“It was all about the Nicky Rackard Cup, that’s what I was aiming for, but I still thought I would have a different run-in with players to prepare for the championship.”

O’Meara knows a good start to the championship is vital if Longford are to first retain their Nicky Rackard Cup status and then look to reaching the knockout stages.

“If we get over Monaghan we will have a right good chance of qualifying for the semi-finals. That’s our aim, to get out of the group.

“For us It has been all about meeting Monaghan on the 12th of May. Winning the Kehoe Cup was a bonus along with being competitive in the league.”

After the Monaghan match, Longford have two home games in the Nicky Rackard Cup which manager O’Meara is happy about.

“It is a definite plus to have two games at home. Having said that, the second and third fixtures against Louth and Warwickshire might not be any good to us if we don’t win the first game.

“If everyone does their best on Saturday I would be quietly confident that we have a decent chance against Monaghan.”