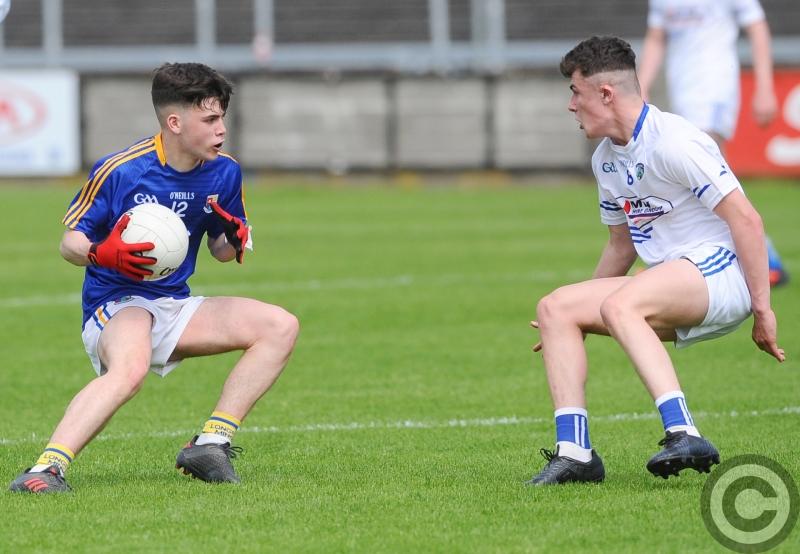 Darragh O'Connell (Slashers) on the ball for Longford against Laois in the Leinster Minor Football Championship first round game at O'Moore Park . Photo: Declan Gilmore

Longford U-17 footballers staged a gallant comeback against Laois in the opening round of the Leinster Minor Championship at O’Moore Park on the Bank Holiday Monday but fell just short in the finish.

Twice in the second half the physical stronger Laois team were nine points ahead but changes were made and the subs introduced made all the difference as the gap was closed to just four points with six minutes remaining.

Longford went in search of goals instead of putting the ball over the bar. Reece Reilly brought a fine save out of Laois keeper Tom Wright and then Eoghan McCormack cut the gap to three in the third minute of stoppage time. The visitors also had claims for a penalty turned away when Euan Finneran was hauled down and Cian Dooner was harshly blown for being in the square.

Laois went up the field and got the insurance point through Seamus Farrelly which extended their lead to four and it was hard luck on Longford who were hit by a real killer blow when they conceded a goal in the early stages of the second half after trailing by 0-8 to 0-3 at the break.

Longford’s next game in the group stage of the Leinster Minor Championship is at home to Wexford on Wednesday 30 May.