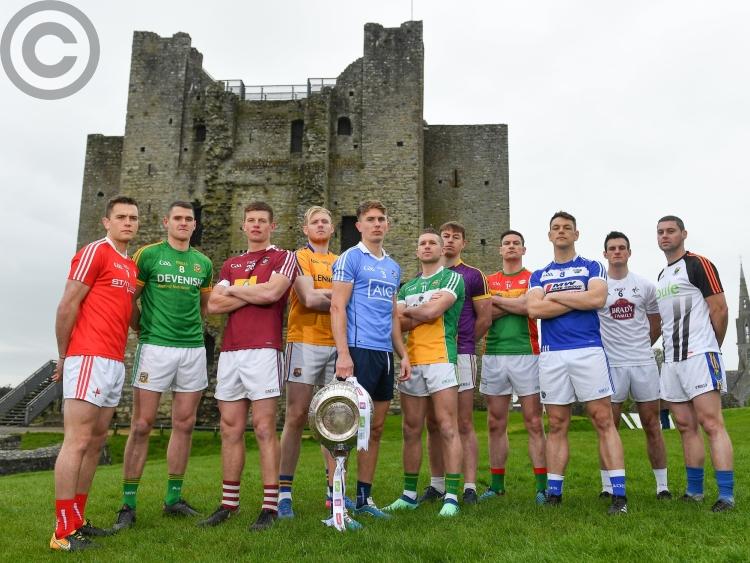 Pictured at the launch of the 2018 Leinster SFC at Trim Castle, Co Meath on Thursday is Longford goalkeeper Paddy Collum and players from the other counties. Photo: Eoin Noonan/Sportsfile

Two fantastic goals from Dessie Reynolds in the second half paved the way for Longford’s win over neighbours Cavan in a challenge match to mark the official opening of Cnoc Mhuire Granard’s new football pitch on Sunday last.

Reynolds got his first goal in the 45th minute when he gained possession and raced through with just one thing on his mind and he found the net with a fabulous finish. Four minutes later Michael Quinn set Reynolds up before he hit a stunning shot to the net. That gave Longford a six point lead and despite having chances Cavan couldn’t really cut the deficit.

With championship firmly on the minds of both managers this game was ideal preparation to play most of the respective squads in this useful exercise.

Longford were hit by a number of injuries and gave fringe players their opportunity to impress. As it turned out Denis Connerton’s side ended the game with 14 due to not having enough substitutes.

The good news for Longford was the return from injury of Liam Connerton after a lengthy absence. Lot of other positives to take out of the game with some players putting in fine performances.

In a tight first half Cavan made the brighter start. Longford had chances but were wasteful in front of the posts. Cavan converted their chances and by the 22nd minute were ahead by four points with scores from Niall Clerkin, Adrian Cole and Jack Wharton.

Longford got a much needed point in the 32nd minute; Thomas Gallagher did very well to win the ball in defence and it ended with Daryl Carrigy shooting over the bar.

Two minutes later Longford were on level terms when Rian Brady’s high ball in was flicked to the net by James McGivney.

Longford took the lead for the first time seconds later when David McGivney fired over  a free but just before the break Cavan equalised (0-8 to 1-5) with a point from Conor Bradley.

Michael Quinn hit over two excellent points as Longford started the second half well but Cavan were level again by the 43rd minute after Clerkin kicked over his third point of the game.

Dessie Reynolds then got his first goal in the 45th minute and this was followed by a neat point from Rian Brady. Reynolds scored his second goal in the 49th minute before Cian Mackey kicked over a free for Cavan but Longford were ahead by seven by the 58th minute with points from Brady (free) and a nice effort  from Daniel Mimnagh.

Bradley and Gearoid McKiernan cut the lead to five by the 59th minute but Ronan McEntire replied for Longford. Cavan’s Sean McCormack kicked over a lovely point in the 64th minute but that was to be their final point of the game.

It was former Cnoc Mhuire player Rian Brady who got the last score of the game when he kicked over a fine effort in the closing stages.