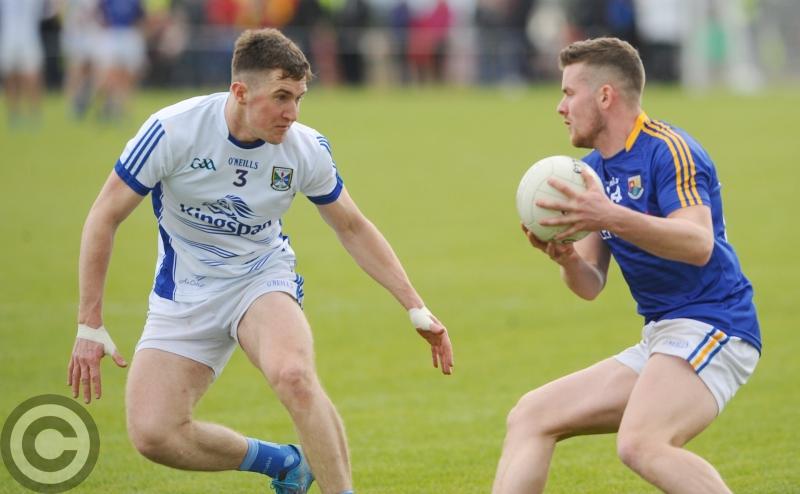 James McGivney on the attack for Longford in his attempt to find a way past Cavan defender Oisin Kiernan. Action from the challenge game on the new pitch at Cnoc Mhuire Granard. Photo: Declan Gilmore

Two fantastic goals from Dessie Reynolds in the second half paved the way for Longford’s win over neighbours Cavan in a challenge match to mark the official opening of Cnoc Mhuire Granard’s new football pitch on Sunday last.

Reynolds got his first goal in the 45th minute with a fabulous finish and four minutes later he hit a stunning shot to the net. That gave Longford a six point lead and despite having chances Cavan couldn’t really cut the deficit.

With championship firmly on the minds of both managers this game was ideal preparation to play most of the respective squads in this useful exercise.

Longford were hit by a number of injuries and gave fringe players their opportunity to impress. As it turned out Denis Connerton’s side ended the game with 14 due to not having enough substitutes.

Some absentees are considered doubtful for the Meath game at the end of the month. Sean McCormack, Andrew Farrell, Barry McKeon, Pauric Gill, Robbie Smyth, Patrick Fox, Barry Gilleran and Padraig McCormack were all missing against Cavan.

The good news for Longford was the return from injury of Liam Connerton after a lengthy absence.