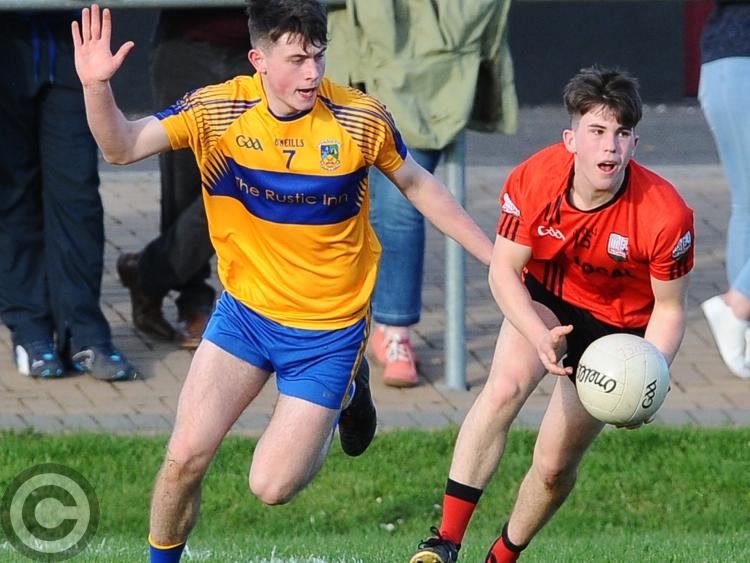 Jamie Bermingham on the ball for Cashel in evading the challenge of Carrickedmond opponent Justin McCormack. Action from the All County Football League Division 2 game last weekend. Pic: D Gilmore

Carrickedmond consolidated their place at the top of the Division 2 League table with a comprehensive 10 point win over Cashel in perfect conditions at Páirc Chiaráin on Saturday evening last.

Usually a tight affair, a big crowd turned up to watch the highly anticipated Carrick v Cashel south Longford showdown but the match was over by the half-time whistle.

A glorious five minutes spell approaching the break saw Carrick clock up an unanswered 3-2 to put a considerable gap between the sides.

Conor Flood broke the deadlock after a tense opening 10 minutes with two scores from the wing back. Cashel centre-half-back Conor Farrell then kicked a massive free from the ground to open up a three point gap with 15 minutes played.

Johnny Gerety hit a fantastic score to settle Carrick who were guilty of missing three goal chances in the early stages of the game with Cashel keeper Shane Bannon making excellent saves to deny Kyle Kenny and Sean Kelly (penalty).

Carrickedmond centre-half- forward Kelly did follow up with two quick points after his penalty to level the game before a super Gavin Kelly free put Cashel back in front.

Carrick’s direct running did eventually reap its rewards nearing the end of the first half. Kyle Kenny and Aidan McGuire kicked a point apiece to put their side in front for the first time. McGuire then scored a goal after a fantastic team passing move and Sean Kelly then blasted the ball off the crossbar into the back of the net.

Kelly broke through again moments later  to score another goal to leave Carrickedmond completely in control with a commanding 3-5 to 0-4 lead at the break.

Both sides brought on substitutes in the second half and Cashel were reduced to 14 players with 20 minutes remaining when Andrew Farrell was sent off.

The dangerman Farrell was superbly marshalled throughout by Enda Farrell and at often stages was double marked by Barry O’Farrell. Cashel struggled to give him the space or enough ball to cause problems and when the county player was switched from midfield they were unable to gain enough possession from kick-outs.

Carrickedmond now play Sean Connolly’s at home this Thursday night and nearing the halfway stage of the league they are in a good position to return to Division 1 which is a necessity if the club are to survive in the senior championship.