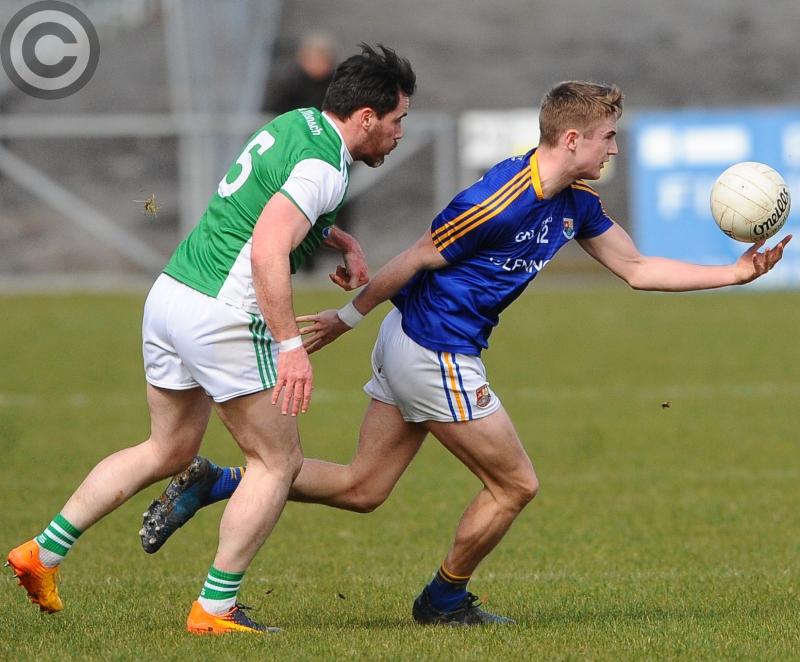 Needing a draw to gain promotion to Division 2 next season and who were looking good when they led by two points at the end of normal time, it turned out to be heartbreak for Longford who somehow managed to lose in a very dramatic finish at Glennon Brothers Pearse Park on Sunday last.

The Longford supporters among the big attendance in the region of 3,000 were left frustrated and angry with a couple of controversial decisions by Down referee Paul Faloon as Fermanagh came storming back in stoppage time to snatch a last gasp win.

A brilliant penetrating run from Conor Berry should have been rewarded with a free in the 70th minute and in this same attack Rian Brady also appeared to be fouled with Robbie Smyth shooting wide in missing the chance of putting Longford three points in front and surely in a safe position to get the result they required.

It was all Fermanagh in the four additional minutes and after Seamus Quigley fired over a couple of frees to leave the sides all square the worst case scenario materialised with time almost up.

The northern official awarded Fermanagh another free, which was harsh on Longford, and while it was a massive pressure kick from a difficult position the clever Seamus Quigley was allowed steal a few yards on his way to slotting the ball over the bar for the winning point.

The final whistle sounded seconds later as the Fermanagh players celebrated their version of the great escape and Rory Gallagher’s ultra defensive side can now look forward to a Croke Park clash against Armagh in the Division 3 Final on Saturday.

It was extremely hard luck on Longford who enjoyed the greater share of the possession in this real war of attrition and the focus for Denis Connerton and his players now switches to the Leinster Championship quarter-final clash against Meath in Pearse Park at the end of May.

Fermanagh trailed by a point at the break, 0-7 to 0-6, but took the lead right at the start of the second half with a goal from a dubious penalty converted by their chief marksman Seamus Quigley.

Longford eventually unlocked the stubborn Fermanagh defence when Daniel  Mimnagh weaved his way through to set up Robbie Smyth for a flicked goal in the 42nd minute but they managed just two more points during the remainder of this gruelling contest through Darren Gallagher (61 mins) and Robbie Smyth (free, 65 mins).

It was hard to watch with so many players on both sides behind the ball and on several occasions Longford were forced by Fermanagh into making several passes across the middle of the pitch in their efforts to create some sort of opening for the vital scores.

Michael Quinn (honeymoon) and Sean McCormack (injured) were missing again for the promotion showdown and it was Fermanagh who had the better of the exchanges in the first quarter to lead by 0-4 to 0-2 with their scores coming from Ryan Jones, Aidan Breen (2) and Ciaran Corrigan, the latter racing  through the opposing defence on his way to shooting over the bar.

Robbie Smyth fired over a brilliantly struck sideline kick for Longford’s opening score in the 5th minute and Darren Gallagher landed a cracking effort from a tight angle near the sideline in the 11th minute - the end result of a well worked move.

A point apiece followed from Smyth (free) and Seamus Quigley (a great long range strike from play) that left Fermanagh leading by 0-5 to 0-3 and a goal chance then fell to Conor McGee in the 26th minute but his shot was blocked by Donal McElligott.

Longford then produced their best spell in this torrid game to register four points in a row in the space of five minutes with defender Diarmuid Masterson the first on target and then Daniel Mimnagh shot over the bar under considerable pressure.

Robbie Smyth converted a couple of frees to leave his side leading by 0-7 to 0-5 but right on the stroke of half-time Seamus Quigley slotted over a close range free to leave just the minimum of margins separating the sides.

A great start to the second half for Fermanagh yielded a goal from a penalty scored in style by Quigley after Conor McGee was supposedly fouled in the square but Longford gradually worked their way back into contention.

After collecting the ball from Rian Brady a quick turn of foot from Daniel Mimnagh saw him stretch the Fermanagh defence and his perfect pass across the face of the goalmouth picked out Robbie Smyth who flicked to the net with seven minutes gone on the  changeover.

Fermanagh were level when substitute Sean Quigley was on target in the 49th minute but then missed a few chances before Longford regained the upper hand with a brace of points through Darren Gallagher and Robbie Smyth to lead by 1-9 to 1-7 with five minutes of normal time remaining.

A couple of Fermanagh wides followed from the Quigley brothers but the tough Ulster county showed a lot of spirit to rescue the situation.

Three points in stoppage time through the Seamus Quigley frees got them over the line in a very tense finish that left stunned Longford in a state of dismay.