Longford shoot Westmeath down in quest for promotion to Division 2 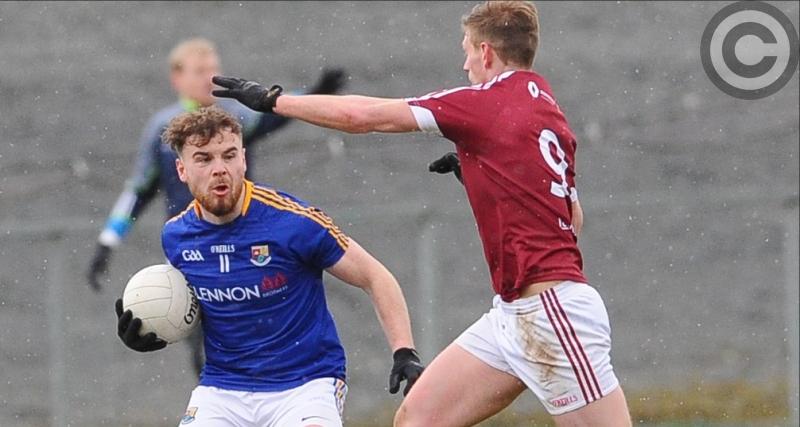 Conor Berry on the ball for Longford in his bid to evade the challenge of Westmeath opponent John Heslin. Action from the NFL Division 3 game on Sunday last. Photo: Declan Gilmore

Conor Berry scored the decisive goal in the final minute of normal time as Longford recovered from a very poor start to register a great win over Westmeath at Pearse Park on Sunday last in the quest for promotion to Division 2 of the National Football League.

It all boils down to the remaining Division 3 fixture at home to Fermanagh on Sunday next and while the counties are currently deadlocked on nine points apiece, Longford have the superior scores difference and thus a draw will suffice against the tough Ulster opposition who drew with promoted Armagh.

Longford will be going all out for the win over Fermanagh in their bid to step up to a higher level along with the bonus of another crack at Armagh in the Division 3 Final at Croke Park the following weekend and it is good to see that James McGivney has returned to the squad following a brief break.

There was a lot to admire about the determined manner in which they battled back to beat neighbouring rivals Westmeath who were reduced to 14 players when defender Jamie Gonoud was sent-off in the 46th minute after receiving a second yellow card.

While it was a tremendous team performance, most  prominent in this sweet victory were Diarmuid Masterson (who was particularly impressive),  Conor Berry, Darren Gallagher, Barry McKeon and Padraig McCormack and Longford will certainly not fear Fermanagh.

Without Michael Quinn (who got married the previous day) and Sean McCormack (injured), Longford were trailing by 0-5 to 0-0 with 15 minutes gone in the local derby at bitterly cold Pearse Park.

Watched by a disappointing attendance that fell short of the 1,000 figure (hampered by the adverse weather conditions),  Kieran Martin, John Heslin (two frees), Luke Loughlin and John Egan got the early scores for Westmeath who were also in the hunt for promotion.

Looking in considerable trouble, Longford eventually awoke from their slumber and after a flicked goal attempt from Andrew Farrell was deflected over the bar in the 15th minute the revitalised home side proceeded to produce some brilliant football during the remainder of a highly entertaining first half.

John Heslin (selected to start at m idfield but who was switched to full-forward) then slotted over a well struck free and the same player flicked the ball to the back of the Longford net in the 30th minute after connecting with a pass from substitute John Connellan.

Westmeath were now back in front but Longford regained the upper hand to fire over four more points  in quick succession from Daniel Mimnagh, Robbie Smyth, Dessie Reynolds and David McGivney to lead by 0-12 to 1-7 at the break.

The home county could have been even further ahead as they were guilty of kicking eight wides in a pulsating first half, as compared to just one for Westmeath, but they had a very lucky escape right at the start of the second half.

Paddy Collum made a fine save to keep out a point-blank shot from James Dolan with the ball breaking to John Connellan who shot over the bar.

Longford replied with a good point from Darren Gallagher and then defender Padraig McCormack surged forward to strike a shot against the post which was followed by an exchange of scores (frees) from John Heslin and David McGivney.

Although aided by wind  advantage in the second half, Westmeath suffered a significant setback when Jamie Gonoud was sent-off but they closed the gap to the minimum of margins when Luke Loughlin landed a fine point in the 49th minute.

A cracking score followed from Conor Berry and after David McGivney missed a close range free, Longford keeper Paddy Collum came to the rescue again when saving a goal attempt from Mark McCallon in the 58th minute.

The next score materialised when John Heslin (who failed to convert a few frees during the course of the game) fired over a Westmeath point (free) in the 64th minute and then Conor Berry blasted a goal attempt wide before Diarmuid Masterson shot over the bar in the 67th minute to leave Longford leading by two points, 0-16 to 1-11.

A tremendous point from Luke Loughlin kept Westmeath in contention but they were struck by a killer blow in the 70th minute when Conor Berry fisted the ball to the net after connecting with a centre from Barry McKeon.

Westmeath’s tale of woe was complete when they ended up with 13 players on the pitch after John Egan was branded with a straight red card following a clash with Longford substitute Peter Foy.