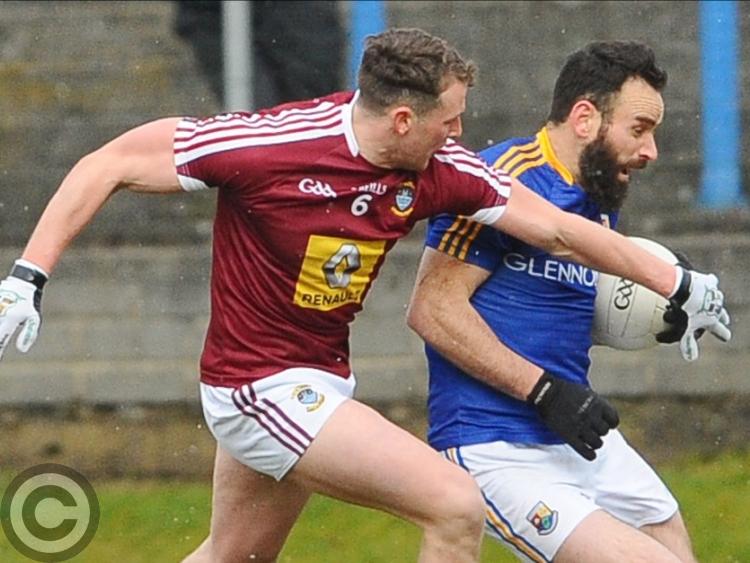 Diarmuid Masterson on the ball for Longford in this tussle with Westmeath opponent Alan Stone. Action from the NFL Division 3 game at Glennon Brothers Pearse Park. Photo: Declan Gilmore

Longford recovered from a very poor start to register a great win over neighbouring rivals Westmeath at Glennon Brothers Pearse Park on Sunday in moving a step closer to a place in Division 2 of the National Football League next season with Conor Berry scoring the decisive goal in the final minute of normal time.

Promotion will be achieved by Denis Connerton’s side should they succeed in beating Fermanagh at Pearse Park on Sunday next (a draw will suffice due to their superior scores difference) and there was a lot to admire about the determined manner in which they battled back to beat Westmeath who were reduced to 14 players when defender Jamie Gonoud was sent-off in the 46th minute after receiving a second yellow card.

Longford were trailing by 0-5 to 0-0 with 15 minutes gone in the local derby but eventually awoke from their slumber and after a flicked goal attempt from Andrew Farrell was deflected over the bar in the 15th minute the revitalised home side proceeded to produce some brilliant football during the remainder of a highly entertaining first half to end up leading by 0-12 to 1-7 at the break.

The points were scored by Conor Berry, Barry McKeon (2), Rian Brady (2), Robbie Smyth (2), David McGivney (2), Daniel Mimnagh and Dessie Reynolds while John Heslin got the goal for Westmeath in the 30th minute.

Longford could have been even further ahead as they were guilty of kicking eight wides in the terrific first half, as compared to just one for Westmeath, but they had a very lucky escape right at the start of the second half. Paddy Collum made a fine save to keep out a point-blank shot from James Dolan with the ball breaking to John Connellan who shot over the bar.

Longford replied with a point from Darren Gallagher and then defender Padraig McCormack surged forward to strike a shot against the post which was followed by an exchange of scores (frees) from John Heslin and David McGivney.

Although playing with the advantage of the wind in the second half, Westmeath suffered a significant setback when Jamie Gonoud was sent-off but they closed the gap to the minimum of margins when Luke Loughlin landed a fine point in the 49th minute.

A very good score followed from Conor Berry before Longford keeper Paddy Collum came to the rescue again when saving a goal attempt from Mark McCallon in the 58th minute.

The next score materialised when John Heslin fired over a Westmeath free in the 64th minute and then Conor Berry blasted a goal attempt wide before Diarmuid Masterson shot over the bar in the 67th minute to leave Longford leading by two points, 0-16 to 1-11.

A tremendous point from Luke Loughlin kept Westmeath in contention but they were struck by a killer blow in the 70th minute when Conor Berry fisted the ball to the net after connecting with a centre from Barry McKeon.

Westmeath’s tale of woe was complete when they ended up with 13 players on the pitch after John Egan was branded with a straight red card following a clash with Longford substitute Peter Foy.