Longford battle back from six points down to draw against Sligo 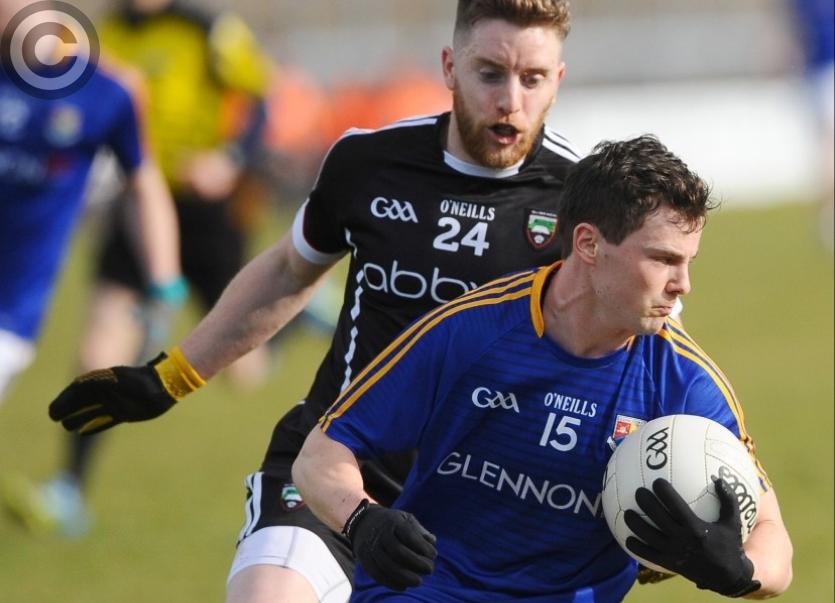 Rian Brady on the ball for Longford in his attempt to find a way past Sligo defender Keelan Cawley. Action from the National Football League Division 3 game at Markievicz Park. Pic: Declan Gilmore

Second goals from Pauric Gill and Darren Gallagher kept Longford’s promotion hopes alive as they showed great character to battle back from a six points deficit at one stage in eventually earning a deserved draw against Sligo at Markievicz Park on Sunday last.

Despite a black card for Diarmuid Masterson in the closing stages of this entertaining encounter that really burst into life on the changeover and the subsequent very harsh decision by Mayo referee Liam Devenney to dismiss Barry Gilleran for a second yellow card deep into stoppage time, Longford were leading by a point and looking like holding out for another win in Division 3 of the National Football League.

But just after rock solid defender Gilleran was sent-off, Sligo were thrown a lifeline when they were awarded a  dubious close range free (one of quite a few that went against Longford during the course of the game) and up stepped Adrian Marren to slot the ball over the bar for the equalising score in the fourth minute of additional time.

There was still no final whistle from the match official and after a Sligo attempt for the winning score dropped short, the frantic action immediately switched to the other end of the pitch with Robbie Smyth shooting wide from a last gasp effort.

Midway through the first half Longford were 0-5 to 0-1 ahead with the scores coming from Conor Berry, Rian Brady, Dessie Reynolds and a brace from Robbie Smyth (one free) and were apparently in control.

Sligo then got their act together in storming back to fire over eight points in a row through Pat Hughes, centre-half-back Adrian McIntyre, Stephen Coen (three frees), Niall Murphy, Liam Gaughan and substitute Cian Breheny to lead by 0-9 to 0-5 at the break and extended their advantage with further scores from Coen (free) and Kevin McDonnell early on the changeover.

That was really putting it up to Longford, who were guilty of shooting a few wides in the early stages of the second half, but they gradually got back on top to outscore Sligo 2-7 to 0-7 during the remainder of the match with influential substitute Pauric Gill scoring 1-1.

Gill got his goal in the 43rd  minute, palming the ball to the net after connecting with the perfect pass from Darragh Gallagher. And then it was the turn of the Granard man (playing a big part in the comeback) to shoot to the net in the 51st minute to put Longford ahead again, 2-7 to 0-12, following a well-worked move that also involved Rian Brady and Dessie Reynolds.

The ding-dong battle continued right to the very end and while Longford will probably feel that they should have won, promotion to Division 2 can still be achieved by winning their remaining two fixtures at home against Westmeath (on Sunday) and Fermanagh (March 25).

Westmeath came from behind to end Fermanagh’s unbeaten run at Cusack Park on Sunday last and Longford have home advantage against both of their rivals in the remaining fixtures.

Westmeath (coached by former Louth manager Colin Kelly) come to Glennon Brothers Pearse Park this Sunday (throw-in 2pm) for a massive match and Longford manager Denis Connerton does not need to be told that a similar barren spell which occured against Sligo cannot be allowed to happen again in the must win showdown against the neighbouring rivals.

After Robbie Smyth converted a free in the 18th minute of the first half Longford did not score again until the Pauric Gill goal in the 43rd minute. Gill was brought on in the 41st minute and made an immediate impact as he landed a fine point under pressure soon after to bring his side right back into contention.

After another goal chance fell to David McGivney with opposing keeper Aidan Devaney clearing the danger, the gap was closed to the minimum of margins when Robbie Smyth shot over the bar.

While Sligo hit back with a fisted point from Pat Hughes, there was another big boost for Longford when Darren Gallagher burst through to plant the ball in the back of the Sligo net as the lead changed hands.

Under the driving force of the prominent Michael Quinn, revitalised Longford were looking the likely winners at this stage but Sligo managed to recover with a point apiece from Neil Ewing and Stephen Coen (free).

A definite Quinn point was then waved wide by the umpires but the score was awarded by the referee after he consulted with the linesman on that side of the pitch.

Longford then hit the front with a terrific long range strike from defender Diarmuid Masterson in the 56th minute but a cracking effort from Niall Murphy moments later left the sides all square again, 0-15 to 2-9.

Substitute Adrian Marren (who did not start due to injury) converted a free for Sligo before Dessie Reynolds weaved his way through to fist the ball over the bar.

Another Marren free and a great point from Robbie Smyth followed and the Abbeylara ace was on the mark again when he fired over a free in the 67th minute to regain the lead for Longford.

That was the way it remained until Sligo were awarded what appeared to be another handy free in front of the posts with time almost up and Marren made no mistake to snatch a precious point for his county in their battle to avoid relegation.