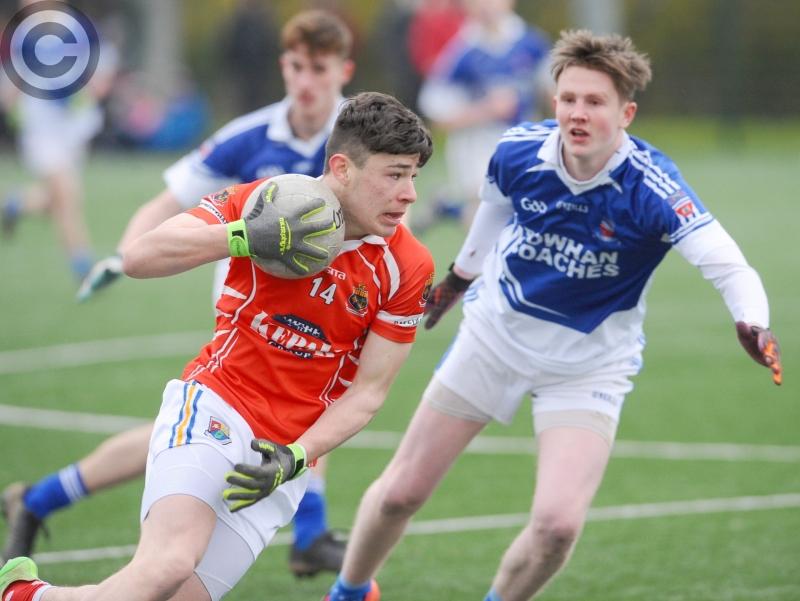 Ballymahon SS were well in the game in the closing stages of the first half but the Co Louth side fired over three points and then got a third goal deep into stoppage time to establish a comfortable eight points advantage at the break, 3-7 to 1-5.

Try as they might Ballymahon SS could not overturn that deficit and in the last minute of the game Ardee CS grabbed a fourth goal to seal the success.

Straight from the throw-in Ardee got the opening score with a neat point from Tristan Knowles. Down the other end Dillon Rushe was fouled and Oran Kenny fired over the free and one minute later Dylan Farrell kicked over a free.

Ardee levelled in the 4th minute but Ballymahon SS were back in front one minute later when Sam Maxwell played a lovely ball into Oran Kenny and he made no mistake in finding the back of the net.

The lead lasted just two minutes as Ardee drew level again when Carl Gillespie’s excellent strike found the back of the net. The sides exchanged points before Ciaran Keenan fired over a great point and then in the 22nd minute Gillespie got another goal for Ardee.

A pointed free from Dylan Farrell left three between them but Ardee went on the attack again and hit over two points in quick succession. Ballymahon SS midfielder Sean Donohue kicked over a neat point in stoppage time but that was cancelled out by a Conor Gillespie effort.

In the fifth minute of stoppage time Ardee got their third goal and it was a real blow for Ballymahon SS. A long ball up the field was gathered by Cian Taaffe and he found the net but they lost midfielder Neil Kerr one minute later through a black card.

Three fine points from Oran Kenny (2) and Dylan Farrell in the opening minutes of the second half closed the gap to five. Kenny was unlucky in that his well struck shot was tipped over the bar by opposing keeper Alan McGauley.

Dylan Farrell fired over a free for Ballymahon SS in the 40th minute.

Jonathan Commins was unlucky to see his shot go wide of the far post and Ballymahon SS were fortunate again in the 45th minute when their keeper Eanna McGrath pulled off a superb save to deny Conor Gillespie a goal.

In the 49th minute Ardee extended their lead to seven points. Ballymahon SS kept searching for a second goal and substitute Rory Howlin came so close but his shot was deflected out for a ‘45. Dylan Farrell then kicked over a free to close the gap with minutes remaining.

Cian Taaffe secured the win for Ardee in the 60th minute when he got their fourth goal and Ballymahon SS keeper McGrath made another fine save just after with Oran Kenny (free) and Shane Matthews exchanging points right at the end.