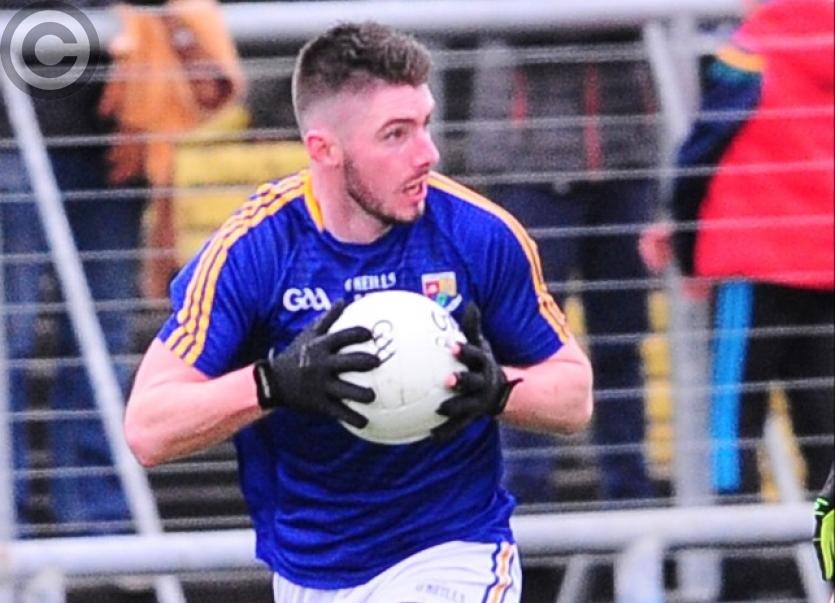 Robbie Smyth, who scored the decisive goal for Longford in the early stages of the second half against Wexford.

It was Longford’s least impressive performance in the National Football League campaign so far this season but it was still good enough to overcome Wexford in almost certainly consolidating their Division 3 status and remaining in contention for promotion.

Just two points separated the sides at the break, 0-7 to 0-5, as Longford wasted three good goal chances through Dessie Reynolds, Andrew Farrell and Daniel Mimnagh in a scrappy first half and the sides were all square when Ben Brosnan and substitute Darragh Pepper shot over the bar for Wexford early on the changeover.

That was really putting it up to Longford at Glennon Brothers Pearse Park on Sunday but the pressure was eased considerably when Robbie Smyth flicked the ball to the net from point-blank range in the 40th minute after connecting with the perfect pass provided by midfielder Darren Gallagher in a slick move that also involved Farrell and Mimnagh.

The decisive Smyth goal was very much the turning point in what was a tight contest up until then with pointless Wexford in desperate need of a win and they were making it difficult for a rather lethargic Longford.

A second goal almost materialised for the home county in the 43rd minute when Mimnagh put Gallagher in the clear but he blasted the ball over the bar and soon after defender Donal McElligott joined the attack to get his name on the scoresheet.

Now trailing by 1-9 to 0-7, whatever hopes Wexford had of staging a comeback were dashed when their midfielder Daithi Waters was sent-off in the 51st minute after receiving a straight red card for a robust challenge on Conor Berry.

The visitors, to their credit, did manage to close the gap to a goal following a brace of scores in quick succession from Ben Brosnan but Longford regained the upper hand during the remainder of the match in adding another three points to their tally.

Robbie Smyth landed a tremendous strike from play in the 57th minute and after substitute James McGivney shot wide when a goal was there for the taking in the 61st minute, late points from Michael Quinn (from a well struck ‘45’) and another replacement Pauric Gill made absolutely certain of a third win for Denis Connerton’s side in the National League this year.

Next up for Longford is the short trip to Markievicz Park on Sunday next to take on Sligo.