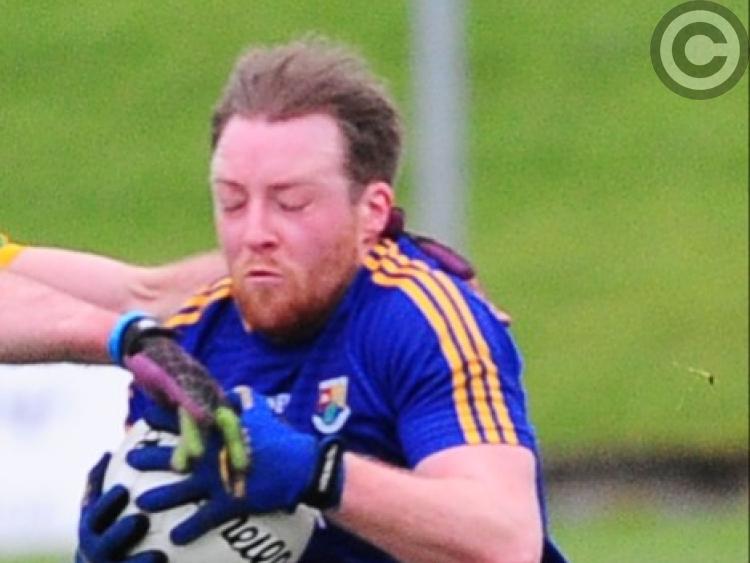 Longford defender Padraig McCormack, who will miss the league match against Wexford on Sunday.

Much has been made about the controversial finish against Armagh at the Athletic Grounds, and the devastating manner in which Longford had victory snatched from their grasp, but that is all in the past now as the midlanders bid to get back on track with a win over Wexford.

Make no mistake about it, the result in Armagh was rough justice on Longford who deserved at least a draw for really putting it up to the Division 3 title favourites but promotion is still very much a possibility.

Three of their remaining four fixtures in the National Football League this season are at Glennon Brothers Pearse Park, starting with the visit of Wexford this Sunday (throw-in 2.30pm), and there is a strong chance of a vital home win.

A quad injury meant that Sean McCormack missed the match against Armagh and while he is apparently set for a return to the squad, his brother Padraig is ruled out along with the suspended Ronan McEntire.

It remains to be seen whether Sean features against Wexford while Padraig is recovering from a knock to the head that forced him to retire in the early stages of the game against Armagh.

Promoted from Division 4 last season, Wexford are in serious trouble at the bottom of the table and are in desperate need of a win after losing their opening three games but were competitive enough away to both Fermanagh (3-7 to 2-5) and Sligo (1-16 to 1-13).

While three points (0-16 to 1-10) was the margin in the home defeat against Westmeath in the previous round,  the goal from Tiernan Rossiter did not materialise until deep into stoppage time and the final scoreline was hardly a true reflection on the actual trend of the game.

Wasteful Westmeath were guilty of kicking a total of 18 wides and should have won with a lot more comfort in a boost for their promotion bid.

Former Kildare player Paul McLoughlin, now residing in Rosslare, is the new man at the helm in Wexford where he has already managed the county minors. McLoughlin, who was also part of the senior backroom team when Jason Ryan and Aidan O’Brien were in charge, took over from Seamus ‘Banty’ McEnaney who stepped down after just one season.

With the notable exception of powerful midfielder Daithi Waters, resolute defender Brian Malone and accurate attacker Ben Brosnan, the current Wexford team is almost completely changed from the last competitive senior clash between the counties back in June 2014.

That was in the Leinster Championship quarter-final at Glennon Brothers Pearse Park, with Longford losing by two points (1-15 to 1-13) when Jack Sheedy was in charge.

Wexford have enjoyed a great record against Longford in the recent past as they also emerged victorious in the 2012 Leinster quarter-final replay at O’Connor Park in Tullamore, coming from four points down late in the game to eventually come out on top by the minimum of margins (1-13 to 0-15).

And it was the same old story in 2013 when Longford had to settle for second best yet again in another championship meeting with their fierce rivals, losing 2-15 to 0-16 after extra-time in Round 2 of the All-Ireland Qualifiers at Pearse Park.

There was some joy for the Glenn Ryan managed county seniors against Wexford back then when they won the 2012 National League Division 3 title, beating the slaneysiders 1-12 to 0-13 in the final at Croke Park.

Ironically, when Longford were relegated to Division 4 in 2014 it was a final round defeat away to who else but Wexford that confirmed the dreaded drop to the bottom tier and that was the last time the teams clashed in the National League.

The Wexford jinx struck again in the last eight of the Leinster Championship a couple of months later and just four members of the current Longford squad featured in that match back in 2014, notably Barry Gilleran, Michael Quinn, Sean McCormack and Peter Foy.

A big number of promising young players are now making a significant impact at senior level and are growing in maturity under the guidance of manager Denis Connerton and his fellow mentors Ciaran Fox and Enda Macken.

The general opinion is that Wexford football is presently in a poor enough state, despite the commanding presence of the vastly experienced Daithi Waters in the middle of the park.

Therefore it will be a considerable setback if Longford fail to register a third win in the current league campaign and particularly so with home advantage.

After beating Offaly and Derry by the combined total of 18 points, there is obviously plenty of scoring power in the sharp attack and Longford are expected to prove too strong for struggling Wexford in the quest to keep their promotion hopes alive.