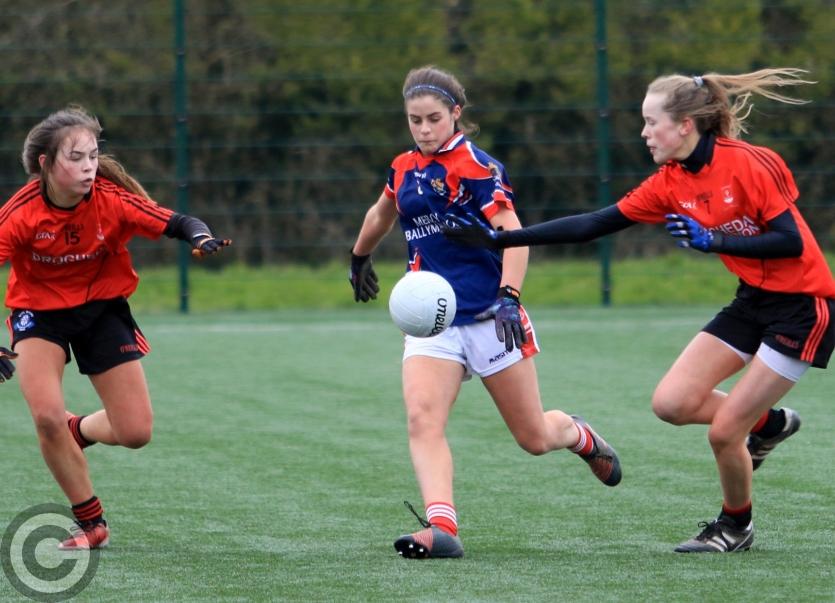 The final could have gone either way and in the 59th minute a free from Leah Devine put Scoil Mhuire back on level terms. Trim piled on the pressure looking for a score to edge them back in front and in the second minute of stoppage time a cross from the impressive Ali Sherlock was finished to the net by Lynch.

It was the proverbial game of two halves; Ballymahon SS were the better team in the first half and led by six points at the break (4-2 to 2-2) while Trim were a different proposition on the changeover. In the third quarter of the game the Meath side turned the six point deficit into a one point lead, scoring 1-4 without reply but some of the  frees that brought them back into contention were questionable.

Ballymahon SS had chances but kicked bad wides as poor shot selection and giving the ball away cheaply came back to haunt them in the end. Their defence did well when under pressure with centre-half-back Clodagh Dillon the best player on the field.

A pointed free from Leah Devine edged Trim back in front again in the 16th minute but in a four minute spell Ballymahon grabbed two goals with Julieann Moran getting their second goal in the 20th minute and Ciara Healy converting a penalty in the 24th minute after Moran was fouled.

Trim’s response was immediate  with Sherlock getting her second goal to cut the gap to two points in the 25th minute. Julieann Moran got her second goal and her side’s fourth in the 28th minute with Cliodhna Allen kicking a point to give Ballymahon a six point half-time lead.

With just a minute gone on the changeover Sarah Lynch got a third goal for Trim and two frees from Leah Devine and a point from Leah Dennehy levelled matters by the 43rd minute. In the 45th minute a pointed free from Devine put Trim in front.

The game changed again in Ballymahon’s favour with substitute Melissa O’Kane scoring 1-1 to put her side ahead by three with 10 minutes to go but Trim cut the gap to just one in the 55th minute.

In the frantic closing stages Trim drew level in the 59th minute with another pointed free from Leah Devine and then in stoppage time got the winning score when Sarah Lynch found the net from close range.