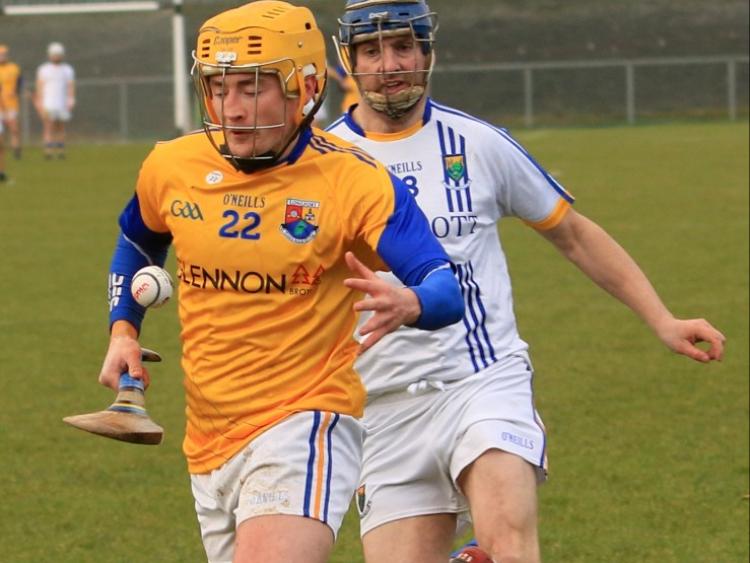 This Longford team is synonymous with a never give up attitude and once again this mantra rang through on this occasion as some silverware was won.

The midlanders trailed by three points at half-time (0-8 to 0-5) but a much improved second half performance by Colum O’Meara’s outfit ensured them a memorable Kehoe Cup victory in front of a rapturous home support.

Their opponents Wicklow, who have a thriving club hurling championship,  travelled to Pearse Park in confident mood but by the time match referee Joe Kennedy blew for half-time that air of confidence was all but gone.

The throw-in time was put back 15 minutes to allow the Wicklow team additional time to warm up because they were delayed due to the atrocious weather conditions and by that stage the pitch was almost covered in a blanket of snow.

Despite the heavy snowfall, both teams put on a great display of hurling for their small but loyal fan base that turned out to support their respective team.

The visitors adapted quickly to the deteriorating elements in the opening exchanges and three points without reply from James Cranley, Christy Moorehouse and Eoin McCormack gave their the early advantage.

The margin however could have been more but for the quick reaction of the Longford netminder Conor Gallagher who denied the Wicklow full-forward Gerorge O’Brien an almost certain goal. Gallagher bravely stood his ground as O’Brien pulled the trigger and his goal bound shot was blocked.

Seven minutes had elapsed before Longford finally registered their first score of the game. Their midfield general Joe O’Brien, who returned from injury, didn’t display any ring rust and fired over an impressive long range effort to get them up and running.

O’Brien, who has given great service to his county down through the years, put in a great shift on Sunday last with a personal tally of four points to his name. Bart Hanley at centre-half-back has quickly made this position his own and once again he had a solid game defending their lines against the Wicklow attack.

Longford had a number of scoring opportunities over the course of the first half but were let down by some wayward shooting. Having said that, two points from Daire Duggan and a long range converted free by Cathal Mullane left just three points separating the teams at the break, 0-8 to 0-5.

Colum O’Meara’s side continued to apply all the early pressure after the break but were unable to convert this level of dominance into scores. They squandered three decent chances in the opening five minutes before Mullane finally got them off the mark with a relatively straight forward free in front of the post.

The more the game developed, the more Wicklow took a back seat in proceedings. Longford started to firmly take control and win the dirty ball and three points on the trot tilted the balance in their favour.

Second half substitute Johnny Casey instigated their revival with a well taken point near the stand side while a Cathal Mullane score and another Joe O’Brien point put them into the ascendency.

Wicklow troubles got worse minutes later when their corner-forward James Cranley was given his marching orders. The referee failed to see the resulting challenge but Cranley’s red card was in clear sight of the umpires who duly notified the match referee.

With victory firmly in their sights now, the home side upped the tempo in the closing stages and when Patrick Walsh got himself into a scoring position, he didn’t disappoint and in doing so secured a well deserved first ever Kehoe Cup success for the Longford senior hurlers who are back in action on Sunday in the National League Division 3A clash against Roscommon at Hyde Park, throw-in 12.30pm.