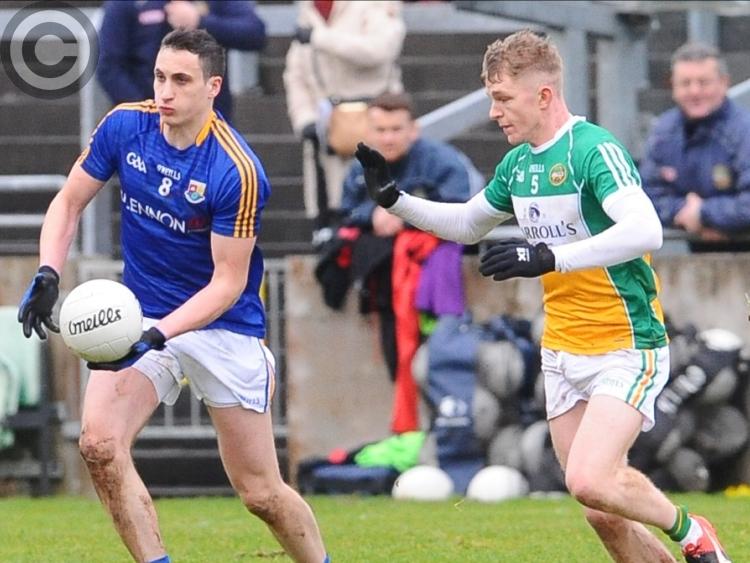 Darren Gallagher pictured in action for Longford against Offaly in the National Football League Division 3 game in Tullamore on Sunday. Photo: Declan Gilmore

Longford made a great start to the new season in Division 3 of the National Football League when they cruised to a very easy win over a most disappointing Offaly side at Bord Na Mona O’Connor Park, Tullamore on Sunday.

With the advantage of the stiff wind the visitors had built up a commanding 0-14 to 1-1 lead at the break with Robbie Smyth the main man in firing over a total of six points (three frees).

Sean McCormack (3), Rian Brady (2), half back Barry Gilleran (2) and goalkeeper Paddy Collum (‘45) were also on target for Longford who were on top in most positions on the pitch and recovered really well after conceding a goal in the 10th minute.

Cian Donoghue planted the ball in the back of the net and when Bernard Allen shot over the bar moments later the sides were all square, 1-1 to 0-4.

But Longford then took over completely to shoot eight points in a row, landing some cracking efforts in the process, and went further in front with a point from Robbie Smyth and a goal from Sean McCormack (set up by Conor Berry) with just a couple of minutes gone on the changeover.

McCormack and Darren Gallagher (with the final pass) were involved in another slick move that led to Rian Brady flicking the ball to the Offaly net in the 42nd minute and a third goal materialised just sixty seconds later as lively Longford continued to cause havoc.

Michael Quinn and Robbie Smyth linked up to create the clear-cut opening for Conor Berry to get his name on the scoresheet. Three more points followed from Dessie Reynolds, Sean McCormack (whose goal attempt was parried over the bar by the opposing keeper Alan Mulhall) and Robbie Smyth (free) to leave Longford in a most emphatic 3-18 to 1-8 lead by the 67th minute.

In giving Offaly some sort of credit they did manage to close the gap with five consolation points in the closing stages through Cian Johnson, substitute Shane Tierney (2), Anton Sullivan (free) and Bernard Allen and ended the game with 14 players when Cian Donoghue (second yellow) was sent-off in stoppage time.

It was a strong performance by Longford, boosted by the return of Diarmuid Masterson who was listed among the substitutes against Offaly, and Denis Connerton’s sharp side can now look forward with considerable confidence to their next league fixture against Derry (who lost at home to Westmeath in Round 1) at Glennon Brothers Pearse Park on Sunday.