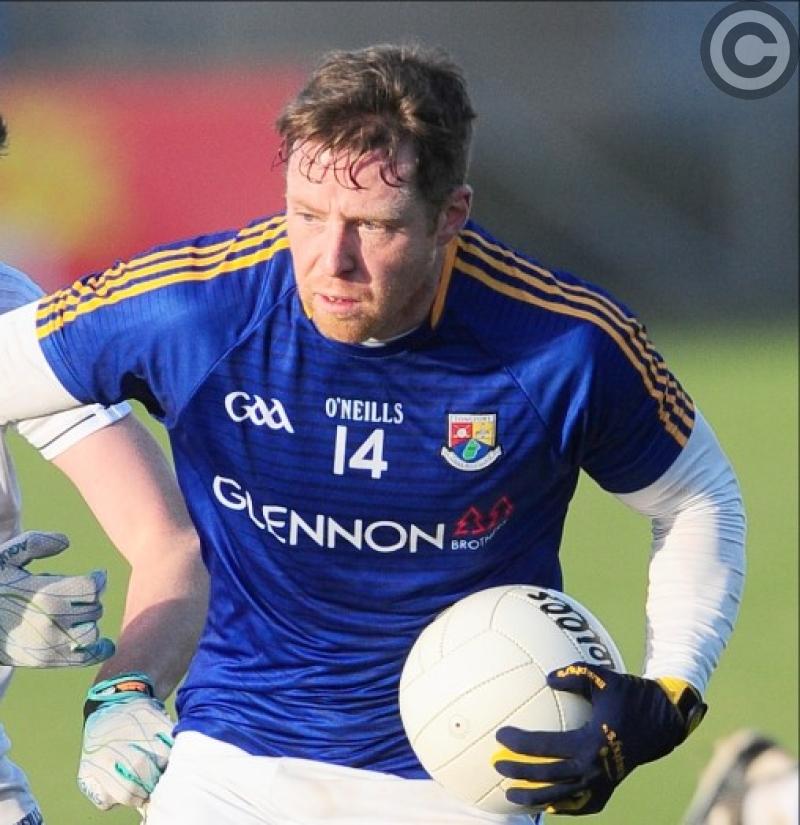 Sean McCormack, the only Longford player to score in the free-kicks shoot-out in the defeat against Meath in the O'Byrne Cup semi-final.

History was made at Pairc Tailteann in Navan on Sunday as the O’Byrne Cup semi-final became the first ever GAA fixture to be decided in a free-kicks shoot-out as Longford unfortunately lost out to Meath in a dramatic finish after the sides had finished deadlocked after extra-time.

In the fading light the frees (five apiece) were taken from the 45 metre line and it was the Royal county who eventually emerged victorious on a 2-1 scoreline with Mark McCabe and Cillian O’Sullivan on target to clinch a final spot against Westmeath at O’Moore Park in Portlaoise next Sunday.

Just Sean McCormack of the five Longford free takers managed to score in the unique shoot-out as Robbie Smyth, Paddy Collum, Barry Gilleran and James McGivney (with the agonising last kick) were all off target.

It must be said that Longford, who led by five points (1-6 to 0-4) in the early stages of the second half with Robbie Smyth getting the goal in the 32nd minute, were unlucky not to have won the match in normal time with a costly mistake leading directly to the crucial goal that Sean Tobin scored in the 58th minute to leave Meath in front by 1-10 to 1-8.

The home side then extended the advantage with a point from Joey Wallace but Longford showed great character in storming back to level matters with Robbie Smyth converting a free before substitutes James McGivney and Darren Quinn fired over cracking points.

Tobin appeared to have won the game for Meath when he shot over the bar in the 70th minute but deep into stoppage time Robbie Smyth landed a glorious equaliser (1-12 to 1-12) and the Abbeylara ace then went close to snatching a last gasp winning score in shooting narrowly wide.

With their stronger bench proving to be a decisive factor, Meath had the better of the exchanges in extra-time and it looked all over when they established a comfortable 1-19 to 1-15 lead with time running out.

A brace from Robbie Smyth (play and free), along with another point from Sean McCormack, accounted for the Longford scores, but there was a a late, late twist in the tale with Michael Quinn scoring a goal (after a shot from Darren Gallagher had hit the post) and Quinn then kicked over a point to leave the sides all square at the final whistle.

What happened next brought a great buzz to the big crowd at windy Pairc Tailteann and it was Meath who advanced to the O’Byrne Cup title decider after the tense free-kicks shoot-out as darkness began to loom.

Former Roscommon player Mark Nally made his debut for Longford when brought on in the closing stages in the second half of normal time.