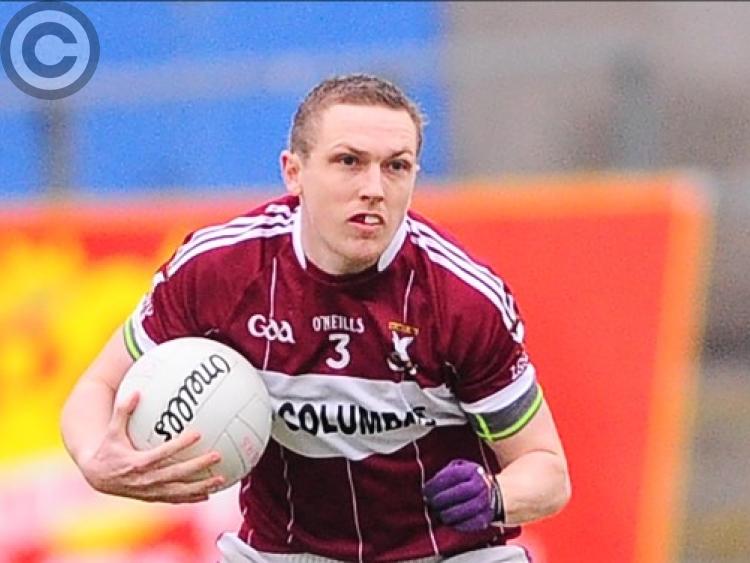 Patrick Fox, one of ten Mullinalaghta St Columba's players selected on the 2017 Team of the Championship.

What a wonderful year it was for Mullinalaghta St Columba’s and their magnificent achievement in completing the senior football titles treble was clearly reflected in the voting process for the 2017 Team of the Championship with 10 of their players receiving Longford GAA All-Stars Awards.

Apart from capturing the senior championship crown for the second year in succession mighty Mullinalaghta also retained the Leader Cup along with winning the Division 1 League competition in 2017.

Mickey Graham’s exceptional side are unbeaten in the county senior club football competitions since May 2016 which is a remarkable record.

David McGivney was the top scorer for St Columba’s, clocking up a total of 27 points in the 2017 championship, while Gary Rogers was rewarded for his versatility in operating effectively in both attack and defence - often winning vital possession in the half-back-line.

There is some more good news for St Columba’s as two of their players, Donal McElligott and Rian Brady, have been nominated for the 2017 County Senior Football Championship Player of the Year with Robbie Smyth (Abbeylara) also on the shortlist for the top individual award.

Smyth was the chief marksman in the 2017 championship in registering the tremendous tally of 2-37 as his club reached the senior football final for the third year in succession and Conor Berry is the other Abbeylara player selected on the 2017 Team of the Championship.

Completing the 2017 Team of the Championship are Padraig McCormack (Killoe Emmet Og), Darren Quinn (Clonguish) and David Morgan (Mostrim), the latter clocking up a lot of scores as the Edgeworthstown side reached the semi-finals.

Nominated in the Intermediate Player of the Year category are Rathcline duo Shane Donohue and Shane Kenny, key players in the championship success for the Lanesboro outfit, while also on the shortlist for this award is Dessie Reynolds - a very influential figure for the beaten finalists Sean Connolly’s.

Colmcille, winners of the Intermediate ‘B’ Championship title, dominated the voting process in this category with three of their players - Anthony Gormley, Michael Kilbride and Cathal McCabe - nominated for the Junior Player of the Year award.

Mairead Moore (Clonguish), Leanne Keegan (Mostrim) and Michelle Farrell (Colmcille) are the nominees for the Ladies Player of the Year Award. Mairead and Leanne featured prominently for their clubs who contested the 2017 senior championship final, with Clonguish capturing the county title after a replay, while Michelle won the player of the match award in Longford’s win over Wicklow in the National League Division 4 Final. Moore and Keegan also played for  the county in the league title triumph.

Shortlisted for the hurling player of the year award are John Mulhern and Seamus Hannon, influential members of the Wolfe Tones Mostrim squad who won the senior championship title for the fifth year in a row in what was a tremendous achievement.

Karl Murray, who lined-out for the beaten finalists Longford Slashers, is also nominated for this award and all three players featured for the county senior hurlers in their excellent National League Division 3B triumph in 2017. The successful squad will be presented with their medals at the Longford GAA function this Saturday night.

Longford Leader readers are invited to text vote their preferred player for the coveted Players of the Championships’ titles and the five individual award winners will be announced at the Gala Awards Night in the Arms Hotel on Saturday next January 20.

Tickets are €30 for the Longford GAA All-Stars Awards Night and can be obtained by contacting the chief organiser, County Board Officer (Central Council Delegate) Michael Carrigy on 087-2915072.

Who will win the Players of the Year Awards?

15 players have been selected by the readers of the Longford Leader for the 2017 Players of the Year in five categories.

The next stage of the selection process is asking members of the public to vote for their preferred choices for the Senior, Intermediate and Intermediate ‘B’ (Junior) along with Ladies and Hurling Players of the Year.

Each text cost one euro and the text lines will remain open until 12 noon on Friday January 19. The winners of the five categories will remain a closely guarded secret until the Gala Awards event in the Longford Arms Hotel on Saturday January 20.

Text ICONIC followed by your selection (name of player) to 57199. Lines close on Friday January 19 at 12 noon.

Tickets are €30 for the 2017 Longford GAA All Stars Awards Night in the Longford Arms Hotel on Saturday next 20 January and are available from Michael Carrigy, 087-2915072.