Brady, Kavanagh, Keegan and Masterson all gone as Longford give youth its fling 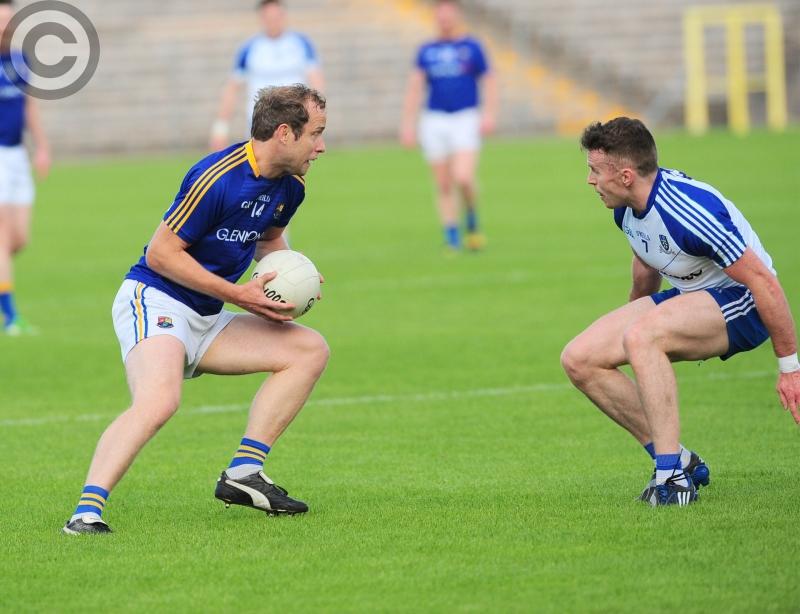 Brian Kavanagh, in his final championship season for Longford, is pictured in action in the memorable win over Monaghan in the All-Ireland Qualifier in Clones in July 2016.

For Longford manager Denis Connerton the O’Byrne Cup was all about performances and giving players their chance to impress but two wins in the group stage means Longford advance to the semi-final against Meath in Navan on Sunday next.

Last Sunday they had a four point win over Kildare in Glennon Brothers Pearse Park; their first fixture at home since March 19th 2017. Speaking about the game and being in the semi-final Connerton said:

“It’s a bonus for us. We set out that if we could win one of those two games because we knew they were tough tasks.

“Louth away,  we don’t normally win in Louth and Kildare at home, we don’t normally beat Kildare. The game against Meath saves us looking for a challenge match. We are playing away from home again; which we are kind of used to.”

Longford started well on Sunday last but were three points down at one stage and trailed at the break by one point but they upped their performance in the second half. Connerton admitted there are parts of their game his side need to improve on.

”We have to cut out those little spells in a game where we go off the boil and let teams into a commanding position. We need to manage our games a little bit better than we have been doing. The first half we came back into it strongly and we done well in the second half to eventually win.”

The two games have given Connerton a chance to try new players out. He has lost several players from last year with Dermot Brady and Brian Kavanagh retired while Diarmuid Masterson, John Keegan, Larry Moran and Barry O’Farrell have not rejoined the squad this year for different reasons.  Liam Connerton, Ronan Sweeney and Shane Kenny have long-term injuries.

Connerton said:”We have twelve U-21s in our squad from last year. It’s a very young squad. Inter-county lifestyle is hard to prolong. We were always going to bring in the young lads.

“Jack Sheedy noticed that the teams that Luke Dempsey and Glenn Ryan were in charge of were coming to an end and Jack started bringing in young lads and we continued with that policy.”

The Longford boss is delighted with the attitude and enthusiasm of the young players.

”All we can do is give them the chance and it’s up to them how much opportunity they want to take. The young lads are enthusiastic and that’s all I can ask off  them.

“Robbie Smyth went off injured against Kildare on Sunday and his fitness will be assessed for the Meath game. Ronan McEntire has a hamstring injury and it will take him a couple of weeks to return."

Getting to the O’Byrne Cup semi-final is good for Longford but Connerton is well aware that the league is more important.

“It’s hit and miss at this time of year with performances and results. They are good wins to get and it’s nice to be in the O’Byrne Cup semi-final but the National League is where it’s at for Longford,” stated Denis.