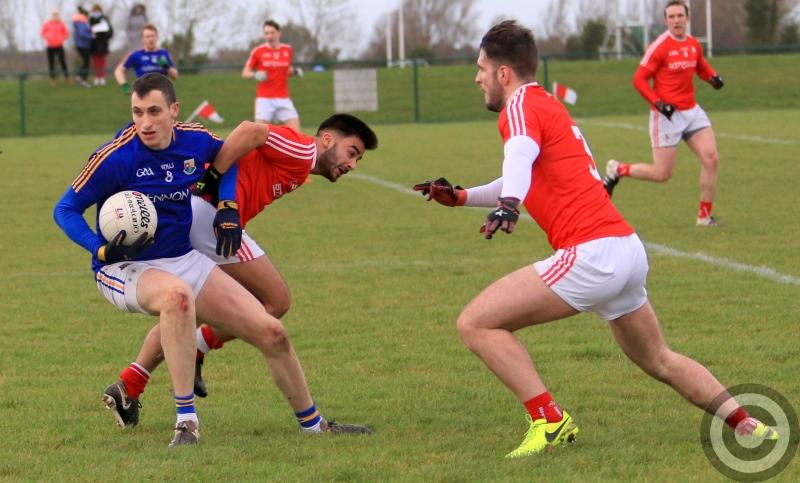 Darren Gallagher pictured in action for Longford against Louth in the O'Byrne Cup first round game at Darver Centre of Excellence on Saturday last. Photo: Syl Healy

Longford senior footballers produced a strong finish to beat Louth in the O’Byrne Cup first round game at Darver Centre of Excellence on Saturday last with six points to spare in the end.

Longford were never behind in the match against Louth with their other Group 2 fixture against Kildare at Glennon Brothers Pearse Park on Sunday next, throw-in 2pm, in their quest to qualify for the semi-finals of the Leinster tournament.

Louth worked hard in the second half to come from six points down to level matters in the 64th minute but Longford responded in fine fashion with a goal from Andrew Farrell to go back in front and points from Dessie Reynolds (a superb strike) and Sean McCormack (2) sealed the win.

Manager Denis Connerton gave starting debuts to Patrick Fox and Daryl Carrigy while Peter Foy and Pauric Gill have made a return to the county senior squad. Cillian Lee, Shane Donohue, Peter Hanley and Cathal Reilly also featured as new players were given their opportunity.

It was a fine performance from Longford, especially in the first half as Louth struggled to remain in contention, and the visitors led by 1-9 to 1-4 at the break with Pauric Gill scoring the goal in the 6th minute.

Louth had a chance to open the scoring in the 2nd minute but Darren Gallagher did well to intercept Ciaran Downey’s pass. Longford went up the field and got their first point through Michael Quinn.

Conor Berry got a second point in the 5th minute before Gallagher set up Pauric Gill for the first goal.

A goal and a point from Louth saw them cut the gap to one by the 11th minute. Longford replied with a brace of points from Sean McCormack (one free) and two great scores from Ronan McEntire.

Louth got two points to cut the gap to three by the 26th minute but Longford ended the first half well with points from Sean McCormack (two frees) and an excellent Pauric Gill score to give them a five point lead going in at the break, 1-9 to 1-4.

A free from Paddy Collum extended Longford’s lead to six points in the 41st minute but aided by the strong wind Louth came back into the game with Sam Mulroy and substitute James Butler kicking over points to cut the gap to two points by the 55th minute.

Minutes later Padraig McCormack was black carded and in the 64th minute Louth were level before Longford regained the upper hand from there until the finish. From the kick-out Longford broke down the field with Andrew Farrell finding the back of the net.

Dessie Reynolds followed that up with a cracking point before Darren Gallagher was shown a black card. Despite playing a few minutes with 14 players Sean McCormack kicked over two more points (one free) as Longford finished strong to secure the win.