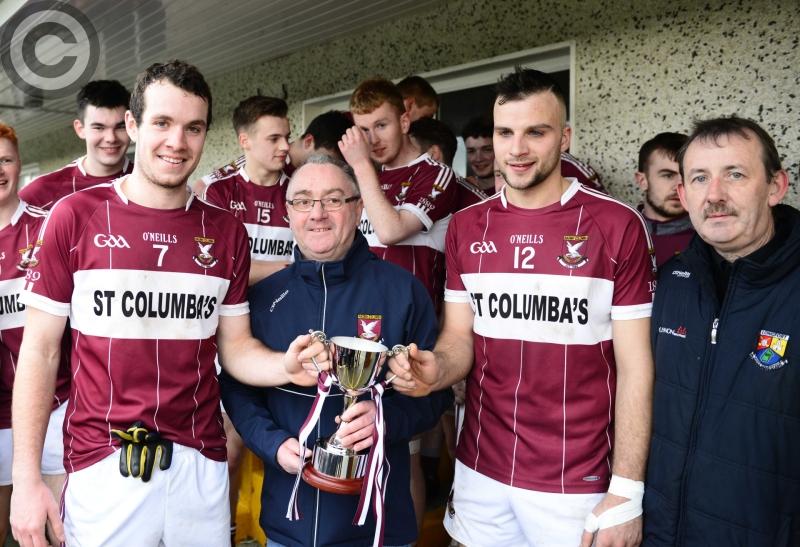 County Minor Board Chairman Finbar Meehan presenting the U-21 'B' Cup to Mullinalaghta joint captains David McGivney and Aidan McElligott with Longford GAA Chairman Eamon Reilly also in the picture.

Mullinalaghta St Columba’s captured their fourth title this season on Sunday last when they defeated Grattans/Rathcline in the U-21 ‘B’ Football Championship Final at Glennon Brothers Pearse Park, adding to the three senior competitions they won this year.

The scoreline was rather harsh on Grattans/Rathcline and the difference between the sides was Mullinalaghta’s clinical finishing while their goalkeeper Luke Meehan produced a string of superb saves throughout the game to thwart the amalgamation and keep his net intact.

There was very little between the sides in the opening quarter. Jayson Matthews got the first score in the 6th minute when he pointed a free. Grattans/Rathcline broke straight from the kick-out but Meehan pulled off an excellent save to deny Shane Kenny.

Points were exchanged between Rian Brady and Kenny (free) before a combination of the Meehan brothers Luke and Tom saved Kenny’s effort but the same player kicked over the resulting ‘45.

A neat point from Cian McElligott and a David McGivney free put two between the sides again by the 16th minute. Four minutes later Mullinalaghta (managed by Dan McElligott) got their first goal; Rian Brady caught a long clearance out of defence and raced through, dummied his way past opposing keeper Conor Gallagher before sticking the ball in the back of the net.

There was six between the sides with 29 minutes gone on the clock but Grattans/Rathcline rallied before the break. First Oisin O’Sullivan’s effort was cleared off the line before Oran Kenny landed a point and then John Hand’s shot was tipped over the bar by Luke Meehan in a  fine save.

Trailing by 1-6 to 0-5 at the break Grattans/Rathcline made a good start to the second half with another point from John Hand but soon after Mullinalaghta got their second goal through Paul Leonard. Shane Kenny then kicked over two frees as the amalgamation tried hard to stay with Mullinalaghta.

David McGivney then kicked over a point before defender Michael Cunningham got Mullinalaghta’s third goal. Shane Kenny responded with a wonderful point and Mullinalaghta could have got a fourth goal in the 46th minute but Cian McElligott’s shot came off the butt of the post.

Oran Kenny fired over a point for Grattans/Rathcline in the 48th minute and then Mullinalaghta launched another attack with Rian Brady setting up Jayson Matthews and the opposing keeper Conor Gallagher did well to tip his shot over the bar to extend the lead to 8 points.

In the final 10 minutes Grattans/Rathcline never gave up and created a number of chances. Iarla O’Sullivan kicked over two points while Shane Kenny was on target again from a free but try as they might they could not find a way past St Columba’s keeper Luke Meehan for the goal they badly needed.

In stoppage time Rian Brady kicked over the final score of the game to leave six points between the sides in capping off a terrific year for Mullinalaghta.