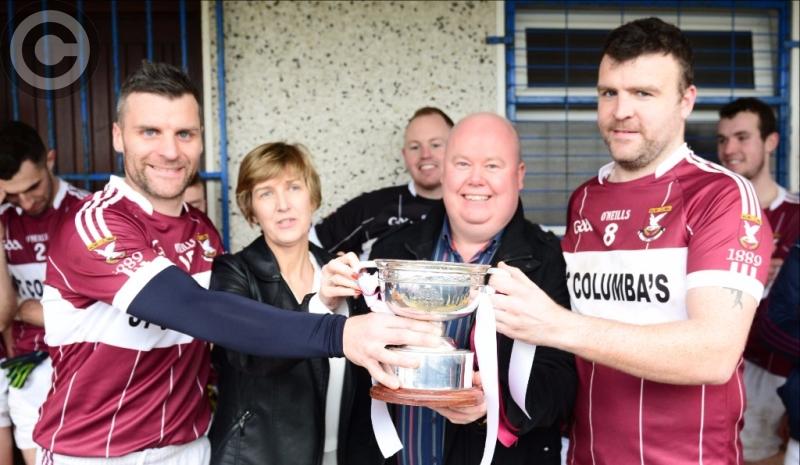 It took Mullinalaghta St Columba’s quite some time to assert their superiority over Longford Slashers in the Leader Cup Final but when they eventually got on top in the second half the county champions pulled right away to win by the comfortable margin of eight points in the finish.

The crucial goal was scored by Aidan McElligott, who flicked a pass from Rian Brady to the back of the net with five minutes gone on the changeover.

That left St Columba’s  in front by the minimum of margins (1-7 to 0-9) and the scores began to flow as they added another ten points to their impressive final tally.

A small attendance in the region of 300 gathered at Glennon Brothers Pearse Park on Sunday last to watch mighty Mullinalaghta complete the senior football titles treble and manager Mickey Graham deserves a lot of credit for the most successful period in the proud history of the north Longford club.

It takes a very fine team to win the Connolly Cup, Leader Cup and Skelly Cup (Division 1 League) in the same season and it is a wonderful achievement to set such high standards.

Slashers, to their credit, really put it up to their strongly fancied opponents in the first half without the injured Niall Mulligan and ended up leading by 0-9 to 0-6 at the break after shooting just one wide in a near perfect performance.

The stand out player was unquestionably Slashers defender Barry Gilleran, operating in a roving role, who landed three cracking points from play and also converted a ‘45’ while Robbie Clarke fired over a couple of scores (play and free).

Wing backs Peter Lynn and Peter Foy, along with Colin Smith (free), were also on target for Eugene McCormack’s generally young side while Jayson Matthews accounted for three of the St Columba’s points in the first half (two frees).

Rian Brady, Aidan McElligott and David McGivney were also on the mark for Mullinalaghta with both keepers, Colm Farrell and Patrick Rogers, producing good saves to keep their net intact as Slashers headed into the half-time break with a three points lead.

However, it was a completely different story in the second half as St Columba’s gradually clicked into top gear to outscore their opponents by 1-11 to 0-3 on their way to winning the Leader Cup for the second year in succession.

After Rian Brady squandered a great chance of finding the net the same player kicked over a point and then set up the all-important goal for Aidan McElligott in the 35th minute.

A score apiece from frees were exchanged between David McGivney and Colin Smith before James McGivney and Jayson Matthews registered excellent points.

A vital interception by David McGivney then prevented Robbie Clarke setting up a Slashers goal chance for Colin Smith. From there until the end it was all Mullinalaghta who shot another seven points through seven different players - Shane Mulligan, Aidan McElligott, Jayson Matthews, Rian Brady, Gary Rogers, Francis Mulligan and Donal McElligott.

Barry Gilleran (free) and Peter Lynn kicked over a couple of late consolation points for Slashers who struggled against the stronger St Columba’s side in the second half.