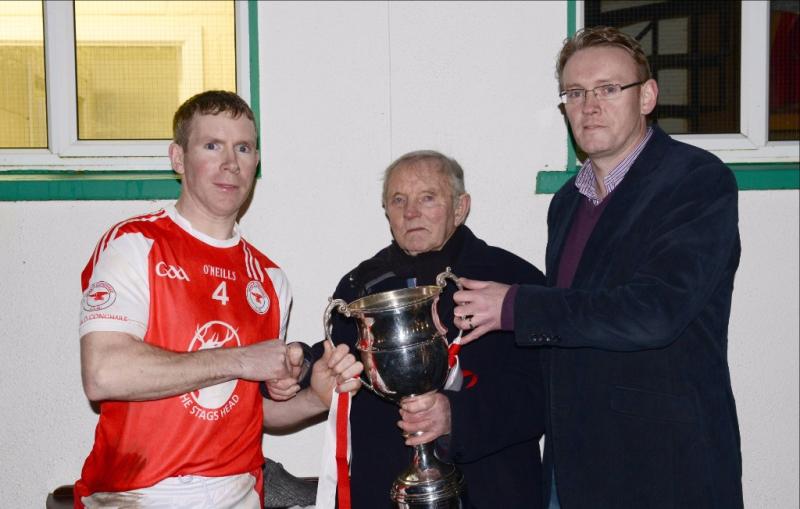 Sean Connolly’s gained some measure of revenge for their defeat in the Intermediate Championship Final when they captured the Patsy Reilly Cup after getting the better of Rathcline in the refixture at Emmet Park on Wednesday night last week.

One point separated the sides in this entertaining Division 2 league final and Rathcline felt aggrieved at the end because they were on the attack when the final whistle went and felt there should have been more stoppage time played.

Rathcline had their chances, especially in the second half, to claim another title but several of their goal attempts were either blocked down by the Connolly’s defence or saved by keeper Stephen Murtagh.

Rathcline hit the front in the 48th minute when Aaron Madden found the back of the net but the lead only lasted a couple of minutes with Connolly’s scoring a goal through Paddy McDonnell.

While Rathcline cut the gap to the minimum of margins when landing a point, Connolly’s managed to hold out in a tight finish.

Without the injured key player Shane Kenny, Rathcline started well with points from James Hanley and Iarla O’Sullivan but Connolly’s had levelled matters by the 12th minute from two frees converted by Dessie Reynolds.

A well struck ‘45 from Reynolds in the 15th minute gave Connolly’s the lead and he then hit over an excellent free from the sideline in the 17th minute before Trevor Murtagh kicked their first point from play two minutes later to extend the lead, 0-5 to 0-2.

While Rathcline enjoyed considerable possession and created chances, they registered a number of wides and were guilty of poor shot selection.

Iarla O’Sullivan landed a point in the 21st minute but Connolly’s replied with two more scores through Joe Heaney and Stephen Lynch before David Rooney got a point for Rathcline just before the break.

Leading by 0-7 to 0-4 at half-time, Connolly’s extended their advantage with a point from Paddy O’Neill in the early stages of the second half as Rathcline squandered some more chances.  As well as getting scores the prominent Dessie Reynolds was also defending, showing his versatility.

Connolly’s were under pressure and in the space of two minutes Rathcline turned a four point deficit into a one point lead, starting with Aaron Madden kicking over an excellent point and that was followed by a terrific score from centre-half-back Shane Donohoe.

Michael Morrissey then set up Madden to score a goal but Connolly’s quickly regained the lead with Paddy McDonnell finishing the ball to the Rathcline net in the 50th minute.

In a frantic final ten minutes both sides had chances with Shane Donohoe kicking over another wonderful point to reduce the deficit to the minimum in the 59th minute but time ran out for Rathcline as Connolly’s collected the Patsy Reilly Cup to end their season on a high.