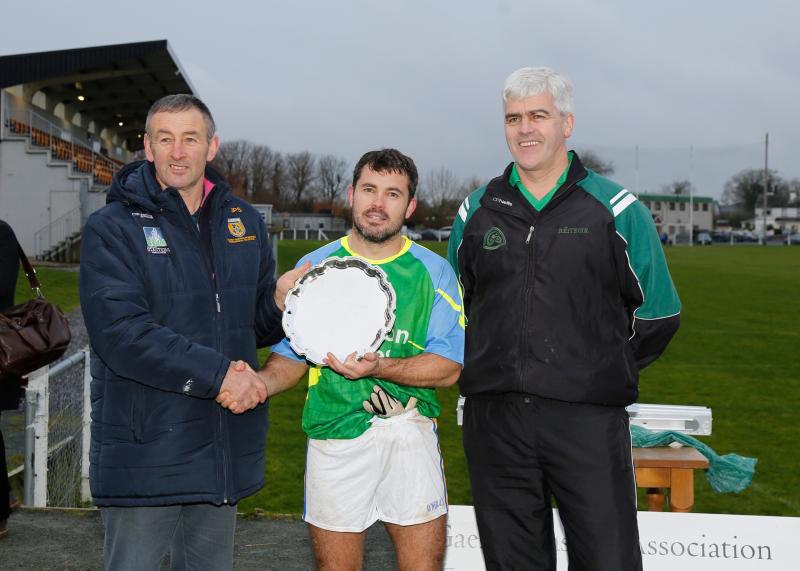 Gerry Carberry (Killoe), the captain of the Leitrim/Longford Masters, is presented with the All-Ireland Plate.

The Leitrim/Longford Masters Football amalgamation, in their first year together, achieved  success when they won the All-Ireland Plate Final on Saturday last.

Up against a strongly fancied Kildare side in the third tier competition, the Leitrim/Longford 40’s played really well to emerge victorious with a single point to spare in the entertaining match played at The Downs GAA grounds, Westmeath.

Kenagh's Enda McGann kicked a wonder score to secure a hard fought and deserved win for the Leitrim/Longford Masters. McGann burst into life in the final ten minutes with two magnificent points to first level the scores and then win the game as the side showed admirable resolve and determination to pip Kildare.

They may be long past their best but nobody should doubt the commitment and enthusiasm of this Masters team and an outbreak of pushing and shoving at the end showed just how much it meant to both teams, competing for All-Ireland glory.

The Leitrim/Longford victory was built on the twin engines that were Gerry Carberry and Andrew McManus, the two half-forwards showing pace and endurance that much younger players would envy and the fact that most of the scores involved those two players shows their impact.

Fintan McBrien had a huge impact also as his tally of 1-5 illustrates. Sean Corr, Enda McCann, Noel Reynolds, Bobby O’Rourke all had major contributions in what was a very enjoyable encounter.

The game started in a welter of excitement as Leitrim’s Andrew McManus was fouled as he was about to score and Fintan McBrien coolly sent the penalty to the KIldare net. Kildare’s response was impressive with Carl McCrane and Alan Smullen both pointing within three minutes.

Leitrim/Longford keeper Francis Noonan made a couple of good saves as the game progressed. The impressive Gerry Carberry swapped points with Kildare’s Dermot Moore but Kildare vaulted into the lead in controversial circumstances as they blasted a quick free to the net.

John Mooney for Kildare and Gerry Carberry, after a great run, were on target but Leitrim/Longford were missing opportunities before a Fintan McBrien free and score from play saw an Aidan Leonard point in response.

Carberry then levelled the scores with a good point before Leonard put Kildare back in front. J.P. McManus scored a good point just before the half-time to leave it all square again but an injury time score from John Reilly gave Kildare a narrow 1-7 to 1-6 advantage at the break.

That lead was wiped out after the break when Leitrim/Longford really took control of the contest. A Fintan McBrien free left it level before good work from Gerry Carberry and Bobby O’Rourke ended with an Andrew McManus point.

McBrien added a free after 37 minutes but Kildare quickly regained parity with points from McGrane and Moore (free) with the latter putting the Lilywhites back in front with a great effort moments later.

McBrien twice dodged defenders midway through the second half to tie the scores once more as the excitement was growing on the sidelines but Kildare edged back in front with another Moore point.

Leitrim/Longford were finishing strong and a block on a Carberry shot and a wide from O’Rourke left them on edge but a great run and a brilliant finish down the left wing from Enda McGann levelled the match.

McGann then had a shot come off the post but it was Kildare who were now squandering chances as they missed two frees. The tension was obviously getting to the players with a black card for Kildare’s John Mooney and a second yellow for Gerry Carberry after an outbreak of pushing and shoving.

With the game in added time, up stepped Enda McGann with another massive score on the run from the left wing to put Leitrim/Longford in front. Kildare tried to engineer one last chance for the draw but Dermot Moore shot wide.