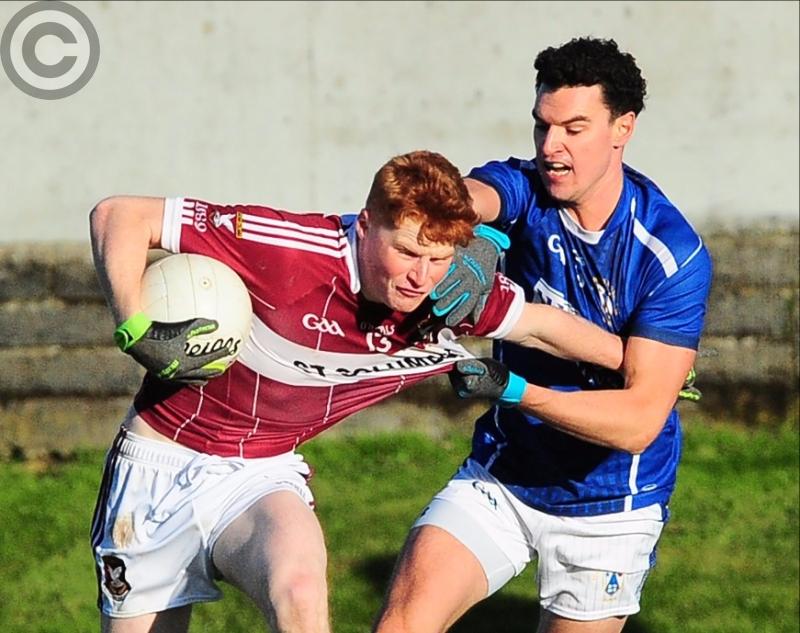 Mullinalaghta St Columba’s blew a glorious opportunity of progressing to the Leinster Club Senior Football Championship semi-final for the second year in succession when they let victory slip away against St Loman’s Mullingar in a frantic clash at Glennon Brothers Pearse Park on Sunday last.

When Rian Brady shot over the bar with 19 minutes gone in the second half, Mullinalaghta were holding what appeared to be a commanding six points lead (1-11 to 0-8) but they failed to register another score against the strong wind as the Westmeath champions somehow managed to emerge victorious.

After John Heslin fired over a couple of long range frees to keep his side in contention, St Loman’s were thrown a lifeline in the 54th minute when Mullinalaghta gave the ball away, resulting in substitute Kieran Kilmurray surging forward before he was eventually fouled in the square and Meath referee Cormac Reilly awarded a penalty.

Up stepped chief marksman John Heslin to score a decisive goal in a major turning point which left just the minimum of margins separating the teams and it was all square in the 59th minute when another of the influential St Loman’s replacements, Ciaran Lynam, shot over the bar from a tight angle.

The momentum was firmly with the Mullingar outfit and they snatched what proved to be the winning point in the second minute of stoppage time when centre-half-back Paddy Dowdall got forward to land a terrific score.

With a lot of injuries in a scrappy second half, eight additional minutes were added on as St Columba’s went in search of the equaliser but it failed to materialise with the best chance falling to Rian Brady but his shot got caught in the wind and dropped short.

St Loman’s kept their composure to consolidate their slender lead in earning a home semi-final against Simonstown Gaels Navan.

And Luke Dempsey’s charges could now end up winning the Leinster Club title after the red-hot favourites, Dublin kings St Vincent’s, suffered a shock defeat away to the Wicklow underdogs Rathnew.

It was a sickening loss for so unlucky Mullinalaghta who played really well with the aid of the elements in a fast and furious first half and were full value for their 1-8 to 0-7 lead at the break with David McGivney (who started at full-forward) scoring a cracking goal as early as the 4th minute after receiving the perfect ball from John Keegan.

With Gary Rogers and James McGivney kicking a point apiece in a lightning start to the local derby watched by a big attendance in the region of 2,000, it was all Mullinalaghta who established a 1-2 to 0-0 lead after just five minutes.

However, St Loman’s (without suspended full-back Shane Flynn) gradually got back into contention with their star man John Heslin firing over four points (three frees) in the first half.

Heslin’s solitary score from play was a tremendous solo effort and he clocked up a total of 1-7 in playing the leading role in this great escape when all seemed lost in the face of fierce resistance from the very determined Mullinalaghta men.

Shane Dempsey (2) and Ken Casey (who fisted the ball over the bar when a goal was on) were also on the scoresheet for St Loman's while in exceptional form for St Columba’s was their playmaker, centre-half-forward James McGivney, who scored another couple of tremendous points in the entertaining first half.

Gary Rogers got a second point with Jayson Matthews (two frees) and Rian Brady (a great score under pressure) also on target for Mullinalaghta who were guilty of kicking six wides in the first half and those missed chances proved to be very costly indeed in the finish.

Thus the Longford champions were four points ahead at half-time and made a great start on the changeover when a brilliant crossfield pass from James McGivney picked out Gary Rogers who slotted over his third score.

Just two minutes were gone in the second half and Mullinalaghta were still motoring and it got even better in the 40th minute when Jayson Matthews shot over the bar.

That was really putting it up to St Loman’s who were looking rattled and while John Heslin replied when he converted a free, a well struck score followed from Rian Brady as Mullinalaghta restored their six points advantage.

But resilient St Loman’s, despite squandering some scoring chances, showed great character in refusing to wilt and finally got their act together to dominate the rest of the extended second half due to the injuries stoppage.

John Heslin scored 1-2 to drag his side to within a single point of Mullinalaghta who were reeling on the ropes after conceding the penalty goal.

St Loman’s got two more points in a very exciting finish to snatch the win as they gained sweet revenge for their narrow defeat against St Columba’s at the same quarter-final stage last year.