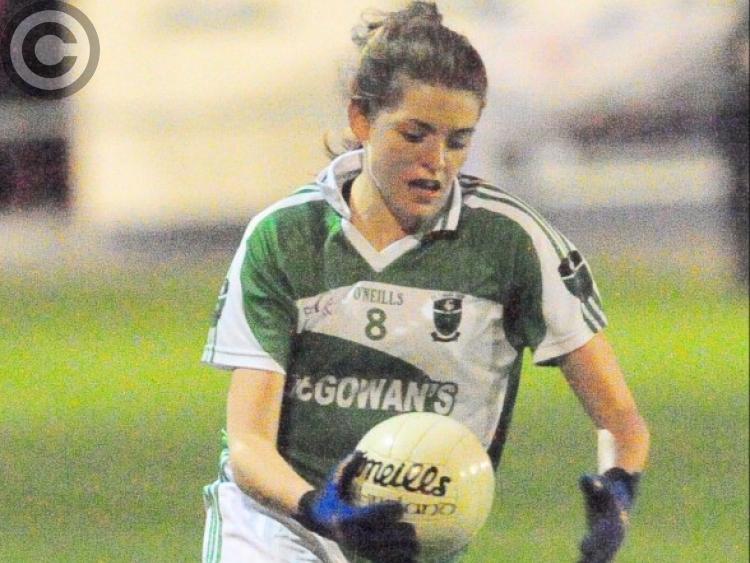 Ailbhe McGowan pictured in action for the Clonguish ladies.

Longford Ladies Senior football champions Clonguish were defeated in the semi-final of the Leinster Intermediate Club Championship by a well drilled St Maurs of Dublin in Rush on Saturday last.

St Maurs, who were the 2016 All-Ireland Junior Club champions, had the backing of a strong wind in the first half. They settled quickly to their task and ran up a 1-9 to 0-0 lead by the 25th minute. Clonguish had a number of scorable opportunities during this phase but squandered clear cut chances, both from frees and play.

In the 26th minute Clonguish finally opened their account when Aoife Darcy pointed from play. This was quickly followed by a goal from Cliodhna Allen and before the half-time whistle Oonagh Shanley and Aishling Greene tagged on a point a piece to reduce the deficit to 6 points, 1-9 to 1-3.

On the changeover the wind had subsided substantially. Aoife Darcy recorded the first point of the second half but St. Maurs replied with a point.

Both Aoife Darcy and Cliodhna Allen with further scores for Clonguish had reduced the lead to just four points by the 41st minute.

Clonguish were playing quite well at this stage and an upset appeared a possibility.  However, a fortuitous goal by St. Maurs dashed the Clonguish comeback. A scrambled clearance rebounded off the post and deflected off the head of a St Maurs forward who was lying prone in the square.

St Maurs followed up with a pointed free before Oonagh Shanley and Natasha Hourican reduced the deficit, scoring points in the 48th and 50th minute, but this was to be Clonguish's last scores of the game.

Jessica Stewart in goals for Clonguish made a number of magnificent saves and in defence Mairead and Caitriona Moore, Sarah Duffy and Doireann McCarthy played well.

Niamh Darcy excelled at midfield while best of the forwards were Oonagh Shanley, Cliodhna Allen, and Aoife Darcy.