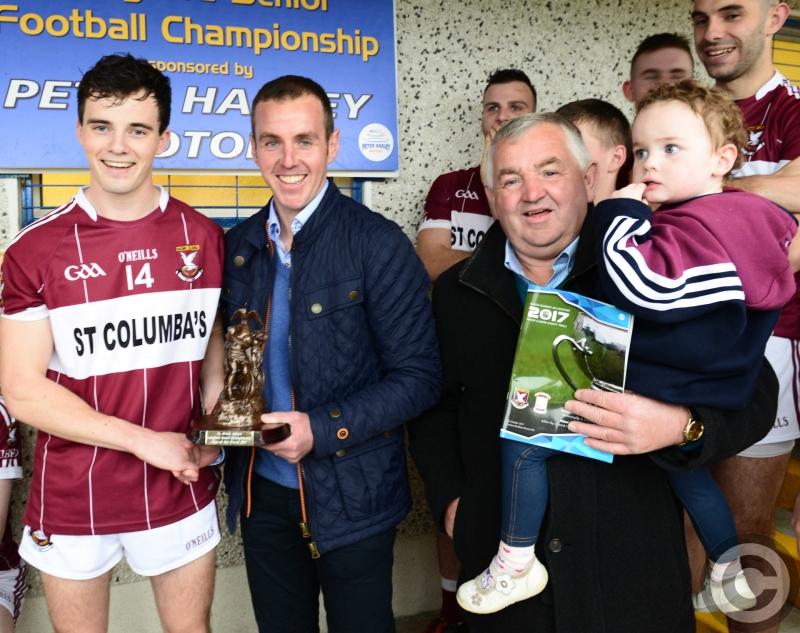 David Hanley, on behalf of the Senior Championship sponsors Peter Hanley Motors, presenting the man of the match award to Mullinalaghta forward Rian Brady with Peter Hanley also in the picture.

Rian Brady has been one of Mullinalaghta’s consistently top performers this year and on Sunday last he fired over four points in the county final with his excellent display earning him the prestigious man of the match award.

The classy forward was quick to shrug off the individual honour and insisted on praising his team-mates for securing another senior title. “It was a team performance. Everyone worked extremely hard and thank God it paid off and we got the win. We are very happy with what we have achieved.”

His performance throughout the final was most impressive but he said that there are still things he would like to improve on.

“There are things you can work on; you are still kicking wides and everything does not go over for you. Sometimes you might not get a score at all. At the end of the day as long as we win I am happy. It is all about the team.”

Mullinalaghta St Columba's made a great start to the game with Brady kicking over two early points; his first coming direct from the throw-in after around 10 seconds. Getting a good start proved vital for St Columba’s.

“We wanted to make a good start and once that happens it is all about momentum then. We always knew that Abbeylara were going to get their purple patch and in fairness to them they did. They had a good spell in the second half  but we kept pushing on in our fierce desire to retain the title.”

When Abbeylara got on level terms in the second half Mullinalaghta regained their composure and this is something they have learned from experience according to Rian.

“You only get that from experience and we got that from last year’s success. We beat Killoe on our way to winning the championship and went so far in Leinster. All those games give you experience and that helped us a lot.”

It has been a fantastic few years for Rian Brady and a lot of his Mullinalaghta team-mates with underage, school and then club success.

“We are very fortunate as a group of players to be very successful. We are delighted with it. I suppose we do appreciate it all because you never know when it will end but hopefully it can continue,” stated Brady.

Since Mickey Graham took over Mullinalaghta for the 2016 campaign he has guided them to two senior championship titles, one Leader Cup triumph and a Division 1 league title and Brady was full of praise for the man that has brought great success to the club.

“He is absolutely fantastic. He just fitted like a glove when he came in. We had managers there before that brought us so far but he was just the man to bring us that extra yard to get over the line. Mickey has made a major impact with his shrewd skills as a manager and instilled a lot of confidence into the squad in the belief that success could be achieved.”