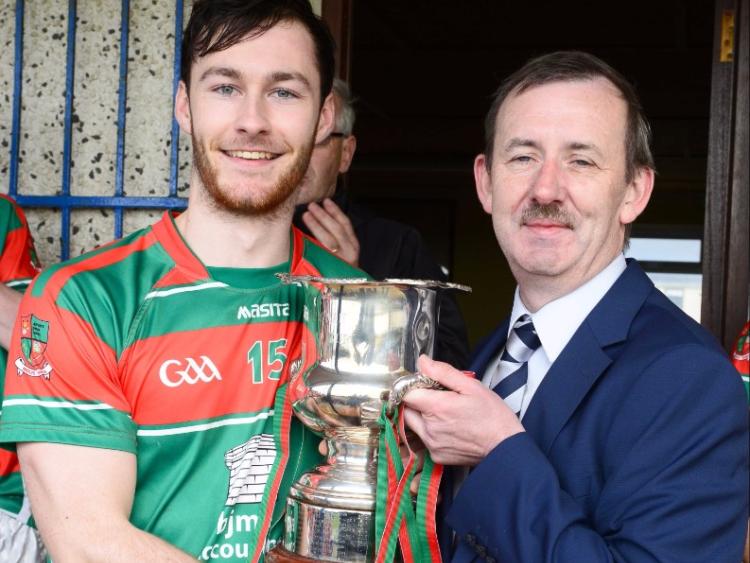 Looking in big trouble at one stage of the first half when they trailed by eight points (2-4 to 0-2) against a resurgent Longford Slashers side, the Wolfe Tones hurlers showed great character in storming back to win the Senior Championship title for the fifth year in succession.

A tremendous achievement by the Mostrim club, who were crowned senior champions for the 18th time, and particularly so when they were reduced to 14 players after Mark Tully received a straight red card in the 50th minute of the county final at windswept Glennon Brothers Pearse Park on Sunday last.

The Wolfe Tones supporters among the attendance of around 200 must have thought their team were beaten at that late stage of the game with Slashers leading by 2-8 to 1-7 after Eoin Donnellan converted a free.

To their great credit, Wolfe Tones refused to be rattled despite the numerical disadvantage and closed the gap with a point apiece from John Newman (long range free) and influential substitute Paddy Cullen.

Man of the match award winner John Mulhern, having already registered 1-4, then put Seamus Hannon through for a decisive goal in the 56th minute as the Edgeworthstown outfit went in front by the minimum of margins, 2-9 to 2-8.

It was a major blow for Slashers who fell further behind when Daniel Connell landed a point for resolute Wolfe Tones who just refused to accept defeat in a very exciting finish to the final.

Slashers replied with a point from Johnny Casey in the 60th minute to leave the minimum of margins separating the sides but they then had a very lucky escape when the Wolfe Tones dangerman John Mulhern was clean through for a goal but his point-blank shot was brilliantly blocked by opposing keeper Tommy Hawes.

Back came Wolfe Tones with another point from a well struck ‘65 fired over the bar by John Newman in the second minute of stoppage time before Reuben Murray immediately shot a point for Slashers.

A free was then awarded to Slashers and the chance of getting the equalising score but Eoin Donnellan’s effort dropped shot, as did the resulting ‘65 which was taken by Gareth Ghee.

The final whistle eventually sounded seconds later after over four minutes of additional time and Wolfe Tones were worthy winners for the determined manner in which they battled back to rescue the situation despite squandering a lot of chances during the course of this entertaining contest.

Scores were scarce in the first quarter of the game on a very blustery day with a brace of John Mulhern points (free and play) putting Wolfe Tones 0-2 to 0-1 ahead after Reuben Murray got the opening score for Slashers in the 8th minute.

A remarkable spell then materialised for wind assisted Slashers (bidding to win the title for the first time since 2001) when they clocked up 2-3 in the space of three minutes. Reuben Murray pounced to score both goals while the points were fired over by Karl Murray, Sean Stakelum and Gareth Ghee between the 18th and 21st minutes.

Wolfe Tones (minus the suspended Thomas Stakem)  were thrown a lifeline with a goal direct from a free taken by John Mulhern that was blocked down over the line in the 23rd minute and the same player then slotted over a free before Eoin Donnellan (free) was on target for Slashers deep into first half stoppage time.

Behind by 2-5 to 1-3 at the break, Wolfe Tones made a strong start to the second half with the wind now in their favour but were guilty of shooting three wides in a row before Daniel Connell landed a point with five minutes gone on the changeover.

Eoin Donnellan (free) and Johnny Casey then registered a score apiece for Slashers to leave the sky-blues leading by 2-7 to 1-4 but Wolfe Tones were far from finished and reduced the deficit with three points from frees in quick succession through John Mulhern, John Newman (a terrific long range strike from the middle of the pitch) and Paddy Cullen (free).

The momentum was firmly with the Mostrim side, despite the dismissal of Mark Tully, as they outscored Slashers by 1-4 to 0-3 during the remainder of the match to retain the JJ Duignan Cup in marvellous fashion and now advance to meet the Meath champions in the first round of the Leinster Junior Club on Saturday October 14.