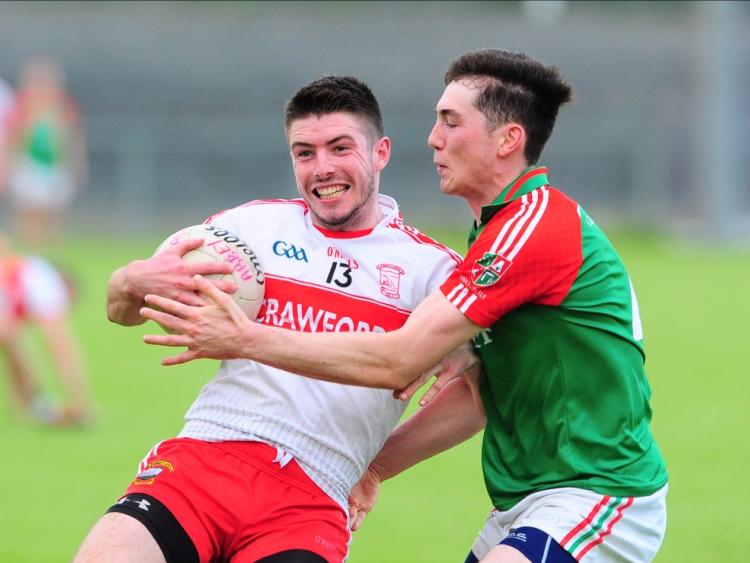 Once again Robbie Smyth was the main man for Abbeylara as his side remained on course to reach the Senior Football Championship Final for the third year in succession in holding out for a slender one point win over Colmcille in the quarter-final clash at Glennon Brothers Pearse Park on Sunday evening last.

The ace marksman kicked 13 points for Abbeylara, nine from frees, but his four scores from play were exceptional. Smyth ended up getting sent-off after he received a second yellow card in the first minute of stoppage time.

Colmcille had possession near the end to draw the game and force a replay but they could not get that equalising score.

Three Robbie Smyth points (two frees) gave Abbeylara a three point lead by the 9th minute. A fine point from Cathal Reilly was Colmcille’s first score and Declan Reilly followed that up with a neat score.

Abbeylara replied with Smyth (two frees) and Jason Kelly putting them four ahead. Colmcille found it hard to contain the major threat of Smyth and conceded a number of soft frees. Another Smyth free in the 17th minute gave Abbeylara a five point lead but credit to Colmcille they hit back.

Cathal Reilly was unlucky to see his effort hit the crossbar in the 19th minute. Rory Hawkins kicked over a fine point two minutes and he added another two (one free) to cut the gap to two by the 24th minute.

Smyth then followed with a fine point from play. Down the other end Darren Mulligan’s effort was deflected out for a ‘45 by Cormac Smyth and the resulting kick was fired over the bar by Gerard Mulligan.

Barry McKeon then landed a point with Smyth (free) on target again for Abbeylara.

Colmcille then hit a purple patch with four scores in a row through, a brace from Rory Hawkins (one free) with Cathal Reilly and Barry McKeon also on target in cutting the deficit to one by the 48th minute.

Once again Robbie Smyth pulled his side ahead with two points (one free) before Barry McKeon responded with an excellent score  for Colmcille.

Smyth kicked over a fantastic point to keep his side ahead and Barry McKeon then  fired over a free before Smyth was dismissed for a second yellow card.

McKeon and Hawkins converted frees near the end but time ran out as they were unable to stop Abbeylara advancing to a semi-final meeting with Mostrim.