Longford Senior Football Championship: Mostrim beat Ballymahon to make it through to the last four 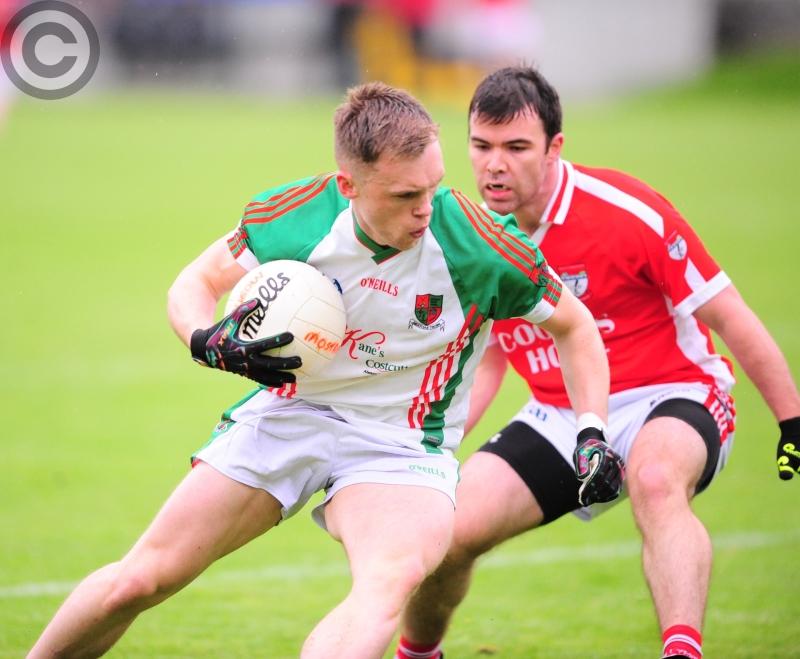 Cillian Lynn on the attack for Mostrim in his bid to evade the challenge of Ballymahon opponent Gareth Murtagh. Action from the SFC quarter-final on Saturday evening last. Photo: Declan Gilmore

Mostrim advanced to the last four of the Senior Football Championship with seven points to spare over Ballymahon in the quarter-final clash at Glennon Brothers Pearse Park on Saturday evening last.

From the start Mostrim were the superior side but points either side of the interval brought Ballymahon back into the game as they cut the four point half-time deficit to just two with three minutes gone in the second half. They could not get any closer to Mostrim who in a decisive four minute spell scored 1-2 to halt the Ballymahon comeback.

Ballymahon lost Kyle Fitzmaurice and substitute Charlie Byrne through black cards in the second half in what was a disappointing performance from Liam Keenan’s side. Their most dangerous forward Joe Kelly was well marshalled by the Mostrim defence and Colm Flynn was also contained as Mostrim were well disciplined throughout the game.

It was a fine display from Jack Lynn’s side who had some excellent performers throughout the field. Their defence did very well; Brian Farrell was superb at midfield while Cillian Lynn tormented the Ballymahon defence.

The only goal in the 39th minute was scored by David Morgan who produced an excellent display in also kicking over six points, all from play.

Mostrim raced into an early three point lead by the 11th minute with Gerard Smith, David Morgan (2) and Brian Farrell (2) getting on the scoresheet.

Ballymahon levelled matters in the 17th minute with two fine points from Kyle Fitzmaurice and a neat strike from play by Colm Flynn.

In a dominant ten minute spell Mostrim extended their lead to six points with Darragh Doherty (2), David Morgan and Cillian Lynn kicking over fine points. Just before the break a Thomas Mulvihill score and an excellent long range free from Joe Kelly left Ballymahon trailing by four points at half-time, 0-11 to 0-7.

Thomas Mulvihill and Colm Flynn (free) got another couple of scores early on the changeover to reduce the deficit but Mostrim quickly regained the upper hand. In the 35th minute Cillian Lynn converted a free; Brian Farrell then kicked over a fantastic point before David Morgan  got a vital touch to score the killer goal with a ball in from Darragh Doherty creating the opportunity.

Things got worse for Ballymahon in the 41st minute when Kyle Fitzmaurice was dismissed for a  black card offence and while Colm Flynn kicked over another free minutes later that was cancelled out by another excellent Brian Farrell point.

Joe Kelly converted a ‘45 in the 49th minute but Ballymahon were finding it difficult to get scores. David Morgan then registered his sixth point and substitute Charlie Byrne was the second Ballymahon player to receive a black card in the 58th minute to compound their misery.

Just before the end Cillian Lynn kicked over a free as Mostrim moved a step closer in their bid to reach the county senior final with Abbeylara standing in their way.