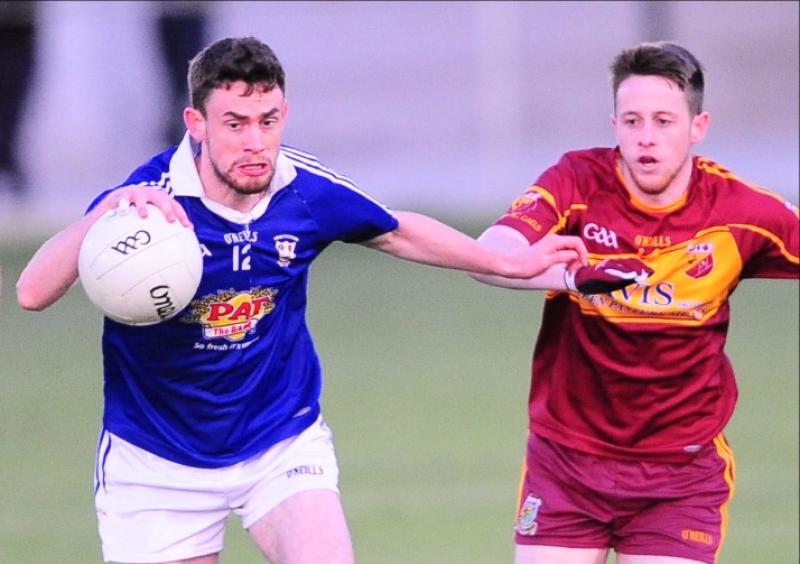 Fr Manning Gaels are facing life in the Intermediate Football Championship next year after crashing to a disappointing defeat against St Mary’s in the relegation play-off at McGann Park in Kenagh on Friday night last.

From the moment they hit the front with a crucial goal from corner-forward Ian Small in the 23rd minute of the first half following a well-worked move, Granard were in control and ended up winning by the comfortable margin of 11 points in the finish to secure their senior status.

Although St Mary’s conceded a goal in the early stages of the game when Emmet Noonan surged forward for the Gaels on a penetrating run to fire a cracking shot to the roof of the net with seven minutes gone on the clock, Granard came storming back to lead by 1-9 to 1-5 at the break with prominent  centre-half-back Brian Sheridan leading the charge.

Five of the points were registered by influential duo, midfielder Darren Gallagher (0-2) and full-forward Liam Sullivan (0-3), while Paul Smyth, a brace from Liam O’Rourke and Mark Tully were also on target for Niall Sheridan’s side in the first half.

Diarmuid Cooney, Petie Collum, Eoin Keane, Nigel Kiernan and Pauric Gill accounted for the other scores for Fr Manning Gaels who were left to rue a glorious missed goal chance in the 19th minute when the clean through Cooney shot wide at a stage when his side led by the minimum of margins, 1-3 to 0-5.

Having said that, Derek Sheridan had a point-blank goal attempt saved by Gaels keeper Paddy Collum in the 5th minute and St Mary’s squandered a number of other scoring chances in the first half.

Whatever hopes the Drumlish/Ballinamuck outfit had of avoiding relegation were dashed when Liam Sullivan scored the second goal for Granard in the 48th minute after latching on to a defence splitting pass from the  impressive Paul Smyth.

Sullivan played a leading role in attack as St Mary’s produced their best performance this year to survive in the senior championship despite the fact that they were already beaten by Fr Manning Gaels in the group stage and actually ended up three points behind their opponents in the table.

But the confusing championship format decreed that the teams who finished in 3rd and 4th place in Group 3 would play-off to determine the second club to be relegated this year with St Brigid’s Killashee already gone down.

Just four points (1-12 to 1-8) separated the sides when Pauric Gill landed a great strike for the Gaels midway through the second half before Granard increased their advantage with a couple of scores (play and free) in quick succession from Liam O’Rourke.

Then came the well struck goal from Liam Sullivan to put the issue beyond all doubt and the other St Mary’s points on the changeover were registered by Liam Sullivan (2), Derek Sheridan, Ian Small, the powerful Darren Gallagher, Kevin McGauran and substitute Vinny Nally.

The other four Fr Manning Gaels scores on the changeover all came from frees converted by Eoin Keane (2), Petie Collum and Martin Cassidy and this was a tame surrender by the former kings of Longford football who have fallen on lean times in recent years.