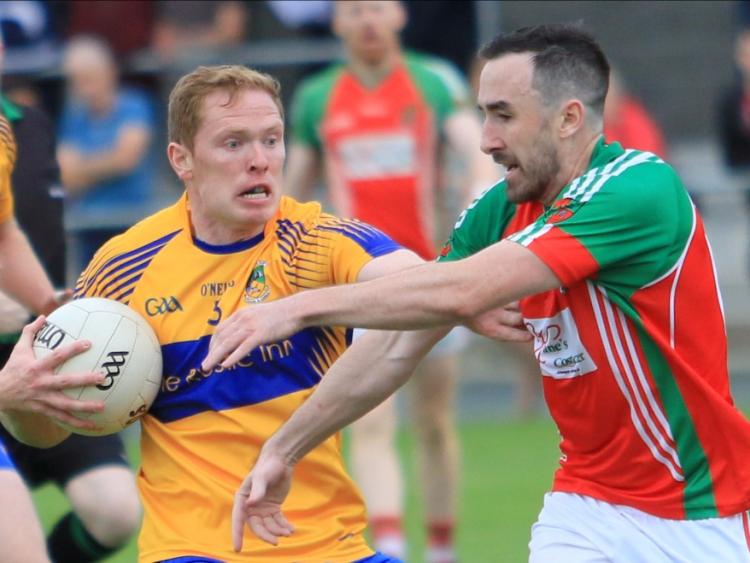 Carrickedmond defender Padraig McGrath has the ball firmly in his grasp in this tussle with Mostrim opponent Shane Kiernan. Action from the Senior Football Championship Group 2 game. Photo: Syl Healy

Mostrim qualified for the quarter-finals of the Senior Football Championship with a narrow victory over Carrickedmond in the Group 2 game at Keenan Park, Ardagh on Sunday evening last.

The minimum of margins separated the sides in the finish and Carrickedmond can be desperately disappointed as this game was there for the taking.

Carrick took a 4 point lead by the 10th minute and were dominating the early proceedings.  It was in fact when the whole team was pushing forward that disaster struck as a sloppy turnover was quickly transported by Mostrim down the field to the back of the net.

Another goal chance quite similar to the first was gifted to Mostrim as Carrick gave away simple possession and Shane Kiernan duly obliged to finish the ball to the net. So ironically after their purple patch in the game Carrickedmond found themselves behind and the momentum was shifted in Edgeworthstown's favour.

Conor Kelly gave Carrickedmond the start they needed when he opened the scoring with a cracking free before David Morgan fisted over the first point for Mostrim.

Four points on the trot from Kelly, Paddy Farrell, John O' Shea and Mark McDonnell put Carrickedmond in a comfortable lead when disaster struck. Attack turned to defence in a matter of seconds as Carrick gave away cheap possession, the space opened up for the onrushing Mostrim players and Cillian Lynn played Darragh Doherty through one on one with opposing David Shannon and he scored a goal.

It got worse for Carrick moments later as Shane Kiernan rocketed the ball past Shannon to put Edgeworthstown ahead for the first time in the 15th minute. Mostrim were now in control which allowed David Morgan and Cillian Lynn to fire their side six points clear.

Carrick, to their credit, did stop the siege with an inspiring point from full- back Padraig McGrath and a brace of frees from Conor Kelly left a goal between the sides at half-time, 2-7 to 0-10 in favour of Mostrim.

Carrick, like the first half, raced into a lead on the changeover with a flurry of scores. It was clear the shackles were off and the South Longford side were going for it in a must win game. Mark McDonnell finished a well worked move to the net within seconds of the restart and John O' Shea and McDonnell added further scores before a tremendous point from Rioch Farrell put Carrick two ahead by the 40th minute, 1-13 to 2-8.

The lively Darragh Doherty steadied Mostrim with a brace of frees during a tense ten minutes when both sides were guilty of missed opportunities.

Heading into the final 10 minutes the sides were level but Carrick suffered a significant setback when Johnny Gerety received a black card and his direct opponent David Morgan capitalised to register the next two scores in the game for Edgeworthstown.

Mostrim’s Sean Noone received his marching orders as the game drew to a close but Carrick couldn't find the goal to win and crashed out of the championship after losing all three fixtures in the group stage.

Mostrim now play the Group 3 runners-up Ballymahon in the quarter-final, the only division 2 team remaining in the Senior Championship, and the returning Brian Farrell will be crucial to Edgeworthtown’s quest to reach the last four.