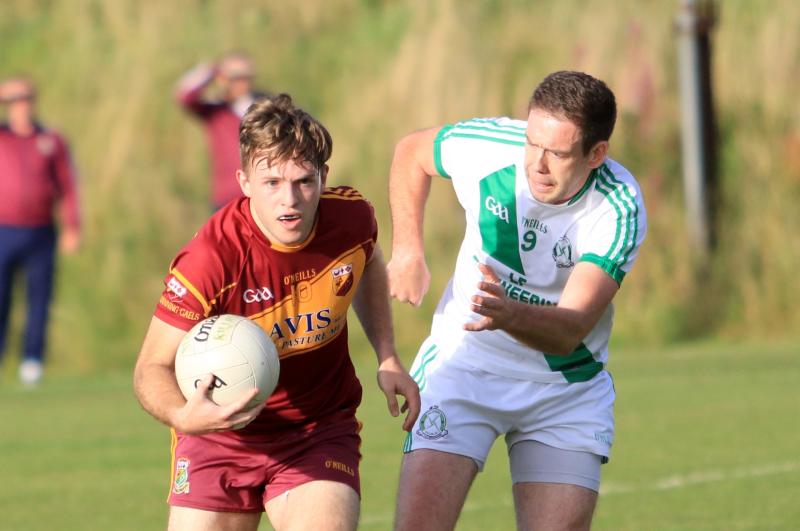 Needing to win by a wide margin in their quest to qualify for the quarter-finals of the Senior Football Championship, Fr Manning Gaels were hard pressed to beat St Brigid’s Killashee with just three points separating the sides in the finish at the Clonbonny grounds in Lanesboro on Saturday evening last.

As it turned out they ended up missing out on a place in the last eight on scores difference to Ballymahon after the sides were deadlocked on five points apiece in Group 3 and the Drumlish/Ballinamuck side have only themselves to blame as they created enough scoring chances to achieve the result they required.

The Gaels now face a relegation play-off against St Mary’s Granard to determine who makes the drop down along with Killashee into the Intermediate Championship next year but it could have been a completely different story had they managed to convert a couple of great goal chances before the break.

St Brigid’s keeper Pat Farrell produced excellent point-blank saves to prevent Nigel Kiernan and Petie Collum from finding the back of the net and it was becoming extremely frustrating for the Gaels who trailed by the minimum of margins at the break, 1-6 to 0-8.

Starting without a few regulars, understrength Killashee deserve a lot of credit for making it really difficult for their strongly fancied opponents and it must be said that Ray Curley’s charges were competitive in all four games in the group stage of this year’s senior championship.

Last year’s Intermediate title winners created a few other goal chances in the second half with Mel Shanley having his attempt blocked by the opposing keeper Paddy Collum who also came to the rescue of the Gaels on three other occasions in the exciting finish to this entertaining encounter.

Collum stopped a point-blank shot from Gerard Evans in the 56th minute and also denied Mark Rossiter (who failed to make proper contact with the ball) and Paddy Feeney, the latter going close right at the end.

In between, Pauric Gill burst through to blast the ball to the net for a cracking score that left the Gaels six points ahead and still in with a chance of claiming the runners-up spot in the group but their hopes were eventually dashed when Michael Farrell scored a goal for St Brigid’s in the final minute of normal time.

That was the way it finished and Fr Manning Gaels were also left to rue a missed penalty midway through the second half when the sides were all square but Paddy Collum booted the ball over the bar.

It was a real ding-dong battle right throughout the game and Mel Shanley fired home a great goal for St Brigid’s in the 8th minute after latching on to the perfect ball in from Emmet Skelly.

Francie Dolan converted three frees in the first half with Mark Rossiter and Gerard Evans (2) getting the other points for Killashee while Petie Collum was the chief marksman for Fr Manning Gaels in landing three points from play.

Also on target for Gary Donohoe’s side in the first half were Diarmuid Cooney (2), Eoin Keane, Pauric Gill and Kevin Whelan (all from play).

The Gaels added a further 1-10 to their tally in the second half, the points coming from Keane (four frees),  David Collum (when a goal was there for the taking), Petie Collum (two frees), Paddy Collum (penalty),  Cooney and Martin Cassidy, while Gill was most unfortunate with a goal attempt that hit the upright early on the changeover.

Francie Dolan (three more frees), Mark Rossiter (a brace from play) and Gerard Evans registered the six points in the second half for the gallant losers with Michael Farrell grabbing a late goal as St Brigid’s battled it out to the final whistle.