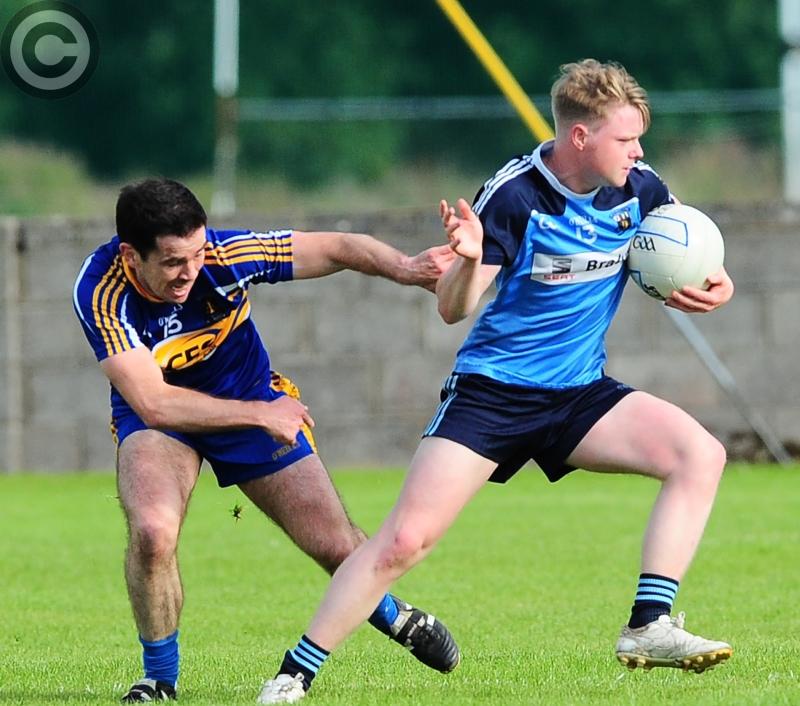 Robbie Clarke on the ball for Longford Slashers in evading the challenge of Dromard opponent Francis McGee. Action from the SFC Group 1 clash at Allen Park. Photo: Declan Gilmore

Despite staging a spirited second half comeback, Longford Slashers were knocked out of this year’s Senior Football Championship as Dromard held out for the win they needed to progress into the quarter-finals.

Dromard produced a strong first half performance in the crucial Group 1 clash at Allen Park, Newtownforbes on Saturday evening last and after Cian Mimnagh scored a goal in the 21st minute they ended up leading by a comfortable seven points, 1-8 to 0-4, at the break.

Slashers though showed great resilience in the second half and with five minutes of the game remaining they had cut the deficit to just one point after Dromard conceded an own goal with Robbie Clarke running in to make sure that the ball ended up in the net.

Diarmuid Masterson was then on target to put Dromard ahead by two but a pointed free from Colin Smith in the 60th minute meant a very tense finish. Dromard broke with  Diarmuid Masterson firing the ball over the bar and there was no more time left for Slashers to recover.

A wonderful point from Francis McGee opened the scoring and then Colin Smith hit over a free for Slashers before Peter Reynolds and McGee (free) put Dromard two ahead by the 11th minute. McGee also had a goal chance cleared off the line by Barry Gilleran.

A point apiece from Colin Smith (free) and Paul Kelly put Slashers back on level terms by the 15th minute and both sides were then guilty of some bad missed chances.

Francis  McGee kicked over two more points (one free) to put Dromard back in front and then in the 21st minute a lovely flick on by Ross McNerney was finished to the net by Cian Mimnagh.

The excellent Bernard Sheridan done well to keep the ball in minutes later for Ross McNerney to get a point before further scores from Peter Reynolds and McGee (‘45) left Dromard leading by eight points by the 28th minute.

After struggling to get scores, Slashers went close to getting a goal when Paul Kelly brought an excellent save out of Dromard keeper Sean McNerney and Barry Gilleran kicked over the resulting ‘45 to leave Slashers trailing by seven at the break.

McNerney twice denied Slashers in the early stages of the second half but they eventually got a badly needed goal in the 35th minute through the industrious Paul Kelly and another free from Colin Smith cut the gap to just three points in the 39th minute.

After all the Slashers pressure, Dromard went up the field and got a much needed point from Diarmuid Masterson. Slashers though when in possession ran at Dromard with Kelly causing them problems.

Another free from Smith left three between them but Dromard were able to stay in front as twice in the space of a few minutes they extended the lead to four points.

Slashers always looked dangerous on the attack and after confusion in the Dromard goalmouth the sky-blues were awarded a second goal to leave just a solitary point separating the sides with five minutes of normal time remaining.

The momentum appeared to be with Slashers but credit to Dromard they didn’t panic as they called on all their experience. In the 58th minute Diarmuid Masterson put Dromard ahead by two but minutes later Colin Smith kicked over another free to leave the minimum of margins between the teams.

Dromard broke again in stoppage time with Diarmuid Masterson kicking over a vital point and that was enough to knock Slashers out of the championship.