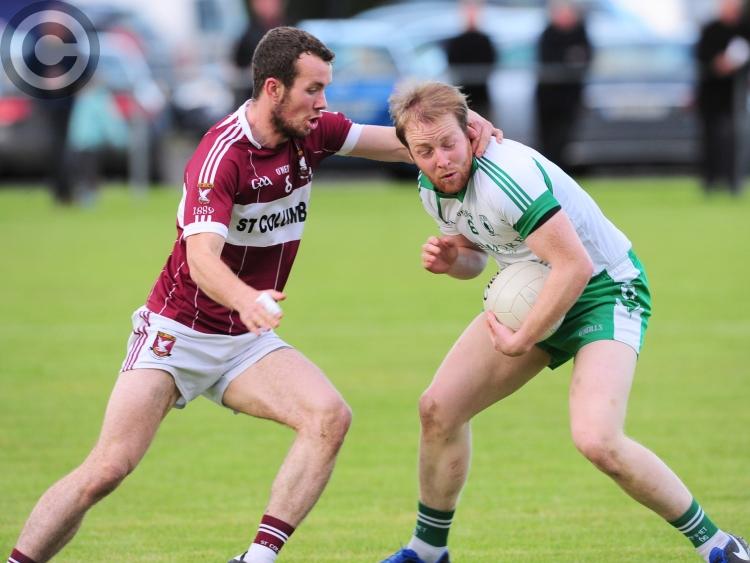 Killoe defender Padraig McCormack has the ball in his grasp but under pressure to evade the challenge of Mullinalaghta opponent David McGivney in the SFC Group 1 game at Monaduff. Pic: Declan Gilmore

A fierce rivalry has been brewing between Mullinalaghta and Killoe in recent years and the very determined manner in which the reigning county champions came out on top on this occasion suggests that St Columba’s will be extremely hard beaten in their burning desire to retain the coveted Connolly Cup.

While both teams had already qualified for the quarter-finals prior to this final group fixture at the Monaduff grounds, Drumlish on Friday night last, there was a lot of intensity even though the result was really immaterial and referee Fergal Kelly had a difficult job keeping control amid some fiery exchanges during the course of this tough encounter.

Killoe were reduced to 14 players when defender Shane Clarke was shown a straight red card in the 24th minute of the first half while Mullinalaghta ended up with 13 players on the pitch after both John Keegan and Aidan McElligott were sent-off for second yellow card offences in the 42nd and 48th minutes respectively.

A number of other players were also booked by the busy Ballymahon official as St Columba’s scored a convincing win to finish top of Group 1 thanks to three first half goals.

John Keegan was the first to find the back of the net in the 16th minute and it was Aidan McElligott who got the second goal in the 20th minute when getting the vital touch to a high ball in from Gary Rogers that put the opposing keeper Shane Fitzpatrick under pressure.

The third goal was scored by Conor McElligott in the 28th minute following a great move and Mullinalaghta ended up in a commanding 3-5 to 0-4 lead at the break against a rattled Emmet Og outfit.

Fergal O’Donnell’s side are badly hit by injuries at the moment with Liam Hughes, Ronan McGoldrick, Daniel Keogh and Paddy Kiernan all ruled out on Friday night, along with lengthy casualty Paddy Thompson, while Shane Dowd was forced to retire with just 13 minutes gone in the first half.

In a tight first quarter Killoe held a slender 0-3 to 0-2 lead with Sean McCormack opening the scoring in the 3rd minute, followed by a brace of points from Denis McGoldrick (free and play), while James McGivney and Conor McElligott (a great effort) replied for Mullinalaghta.

But from the moment John Keegan was put clean through by Jayson Matthews for a well-taken goal midway through the first half, St Columba’s took over completely in adding another 2-3 to their tally.

Aidan and Conor McElligott scored the goals while the points were fired over by Jayson Matthews, David McGivney (free) and Donal McElligott to leave the highly charged county champions in a strong position, 3-5 to 0-3 in front.

Denis McGoldrick converted a free for Emmet Og before the break but Mullinalaghta continued to dominate in the early stages of the second half as five more points were registered - a brace apiece from substitute Rian Brady and Jayson Matthews (one free) with James McGivney also shooting over the bar.

Seamus McCormack and Denis McGoldrick (free) replied for Killoe, who trailed by 3-10 to 0-6 before Mark Hughes landed a point in the 39th minute.

Mullinalaghta failed to register another score during the remainder of the match but the damage was already done.

It mattered little to the eventual outcome when Mickey Graham’s charges were reduced to 13 players but Emmet Og did make the most of the numerical advantage in the final quarter to clock up six scores in a row.

Three points (two frees) from Daniel Mimnagh, with Mark Hughes (free), substitute Ciaran Donohoe and Sean McCormack also on target, gave the final scoreline a more respectable look but Killoe really need to get some of the injured players back as they meet Mullinalaghta again in a most appealing  quarter-final clash on Saturday week, August 26.