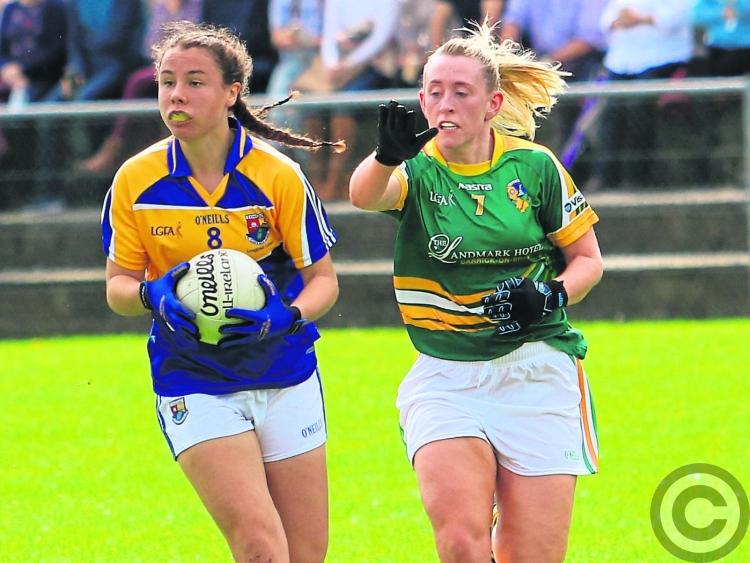 There was heartbreak for the Longford ladies as they narrowly lost out to Leitrim by two points in the high scoring All-Ireland Intermediate Championship Qualifier in Boyle on Sunday last.

Longford played the better football but Leitrim were clinical in front of the posts, scoring seven goals, and this proved to be the difference as they advanced to meet Tyrone in the All-Ireland quarter-final.

Longford were also incensed by some dubious refereeing decisions. The goal Leitrim scored before the break looked like it should have been a free out because Aine Tighe was holding Mairead Moore’s jersey. Longford also lost Mairead Reynolds to the sinbin in the second half and it appeared to be a harsh call.

Aine Tighe was always going to be the player to watch and Longford found it extremely difficult to stop the serious threat of Leitrim’s star player who ended up scoring 3-3.

Inside the opening minute of the game Tighe scored her side’s first goal. They added a point but credit to Longford they took a hold of proceedings with the excellent Aisling Greene starting the scoring in the 8th minute. Michelle Farrell scored a lovely goal one minute later to draw Longford level.

Six points in a row gave Longford a six point lead in the 17th minute, 1-7 to 1-1, and Leitrim were struggling but out of nothing they broke down the field and grabbed a second goal in the 20th minute. Longford tried to keep in front but in the 27th minute Ailbhe Clancy got Leitrim’s third goal to cut the gap to one.

Leitrim took the lead again in first minute of stoppage time when Michelle Heslin got their fourth goal. Aisling Reynolds levelled for Longford with a fine point but just before the break Tighe got her second goal and her side’s fifth. Half-time: Leitrim 5-3 Longford 1-12.

Longford started the second half in a lively manner and they cut the gap to one point in the 35th minute but once again they allowed Leitrim in and a high ball into Tighe was finished to the net by the player.

Aoife Darcy and Reynolds kicked over points to leave Longford trailing by two in the 43rd minute but in the space of one minute disaster struck. First Mairead Reynolds was sin binned and then Leitrim got their seventh goal. It was tough on Longford who found themselves behind by six points.

Anna Conlon kicked over a neat point for Leitrim to extend the lead to eight points but Longford went down the field and Aoife Darcy pulled a goal back.

Tighe kicked over her side’s final score of the game in the 56th minute. Longford still had time to make a comeback but Leitrim keeper Michelle Guckian denied them twice and they kicked poor wides.

Aisling Reynolds (free), Michelle Farrell (free) and Anna McDonnell kicked over late points for Longford but they were unable to overturn the deficit in making their exit from the All-Ireland Intermediate Championship and now face into a relegation play-off to avoid the drop back down to the Junior grade.