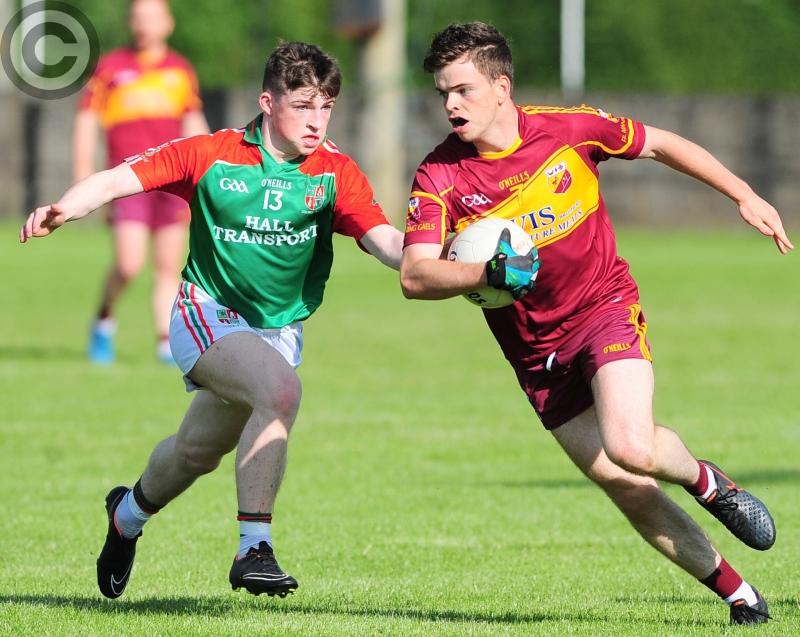 Colmcille left it late as they overcame a very determined Fr Manning Gaels side in the Senior Football Championship Group 3 clash at Allen Park, Newtownforbes on Sunday evening last.

There was just one point between the sides in the 57th minute after Gaels keeper Paddy Collum kicked over a ‘45. The Drumlish/Ballinamuck side had chances after that but Colmcille defended well. Late points from the McKeon brothers Paul and Barry (free) clinched the hard earned win for Colmcille.

The Gaels will wonder how they could not get something out of the game because they certainly put it up to a side strongly fancied to top Group 3 and advance to the championship quarter-finals. Pauric Gill was immense throughout for the gallant losers.

Noel Farrell kicked over the opening point in the 2nd minute but points from Anthony Kane and Eoin Keane (free) put the Gaels in front in the 6th minute.

Colmcille hit back with a Cathal Reilly score and a lovely Barry McKeon effort to lead again by the 10th minute.

The Gaels were back level again moments later with a fine Eoin Keane score but once again Colmcille replied with a Martin Mulligan point and a well taken free from Noel Farrell putting two between the sides by the 20th minute.

An exceptional curling point from Pauric Gill closed the gap and scores were then exchanged between Noel Farrell and Eoin Keane (free) before Nigel Kiernan drew the game level in the 29th minute. Right on the stroke of half-time Rory Hawkins kicked over a free to leave Colmcille in a slender 0-7 to 0-6 lead at the break.

On the restart Pauric Gill levelled the game for the Gaels and then three minutes later another Eoin Keane free put them in front again. Alan McKeon brought Colmcille level in the 37th minute as neither side was allowed dominate possession.

Colmcille had a goal chance in the 38th minute but were denied by some great defending by a forward. Declan Reilly passed to Vinny Hourican but his pass into the square was brilliantly intercepted by Pauric Gill.

Rory Hawkins (free) put Colmcille back in front in the 41st minute and he was denied by the butt of the post in the 50th minute as Colmcille began to create chances. Declan Reilly set up Barry McKeon in the 55th minute as he kicked over his second point and put two between the sides.

With three minutes remaining the game was in the balance when Paddy Collum kicked over a ‘45 to leave the Gaels trailing by just a solitary point. Try as they might they could not get the equalising score as Colmcille defended resolutely.

In stoppage time Paul and Barry McKeon kicked over a point apiece to make sure that Colmcille would make a winning start to their senior championship campaign.