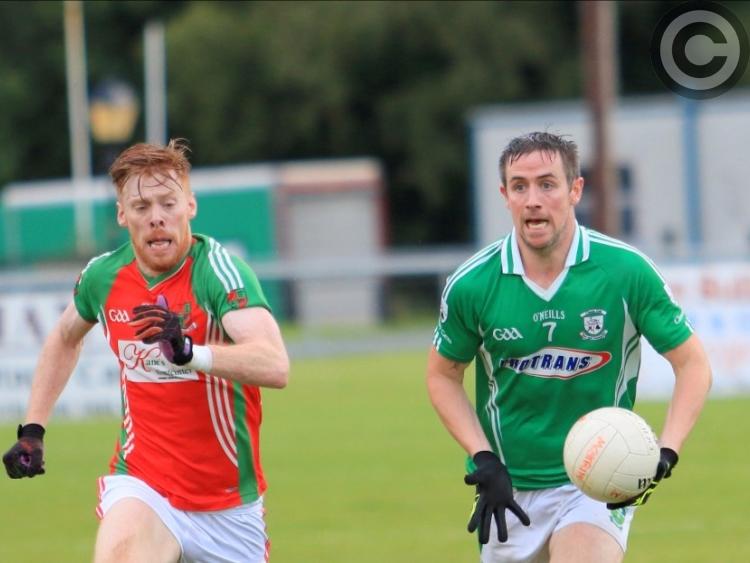 Anthony Watters on the ball for Clonguish in breaking away from Mostrim opponent Gerard Smith. Action from the Senior Football Championship first round game on Friday night last. Photo: Syl Healy

The group stage of the Senior Football Championship has proven to be unpredictable in recent years and it yielded another surprise result as late, late goals from Darragh Doherty and Cillian Lynn saw Mostrim crack Clonguish in this entertaining opening round fixture at Maguire Park, Ballinalee on Friday night last.

Gifted a goal right at the start of the second half when a speculative long range kick from David Barden was fumbled across the line by the Edgeworthstown keeper Ciaran Garvey, it looked like Clonguish had done just enough to come out on top when Paul Barden fisted the ball over the bar in the 57th minute.

That left the Newtownforbes outfit leading by a couple of points, 1-13 to 1-11, but it all went wrong for the hot favourites in a dramatic finish and they suffered a significant setback when David Barden was sent-off after receiving a second yellow card in the 59th minute.

Down to 14 players, Clonguish was dealt another blow after corner-back Neil Devlin lost possession when put under pressure by Brian Farrell and the alert Darragh Doherty pounced on the breaking ball to score the crucial goal that put Mostrim ahead by the minimum of margins in the first minute of stoppage time.

And Edgeworthstown struck the killer blow a couple of minutes later when Fintan Coyle and Seamus Hannon were involved in the slick move that send Cillian Lynn racing through and he kept his composure to plant a cracking shot in the back of the net.

Clonguish, to their credit, tried to rescue the situation and following a point from substitute Mikie McGuinness they were awarded a close range free in the fifth minute of stoppage time but Paddy Dowd’s attempt to snatch a last gasp equalising goal was blocked down.

The records would appear to suggest that this was Mostrim’s first ever win over Clonguish in the history of the county senior football championship and was probably deserved.

Clonguish were hard hit when their most lethal forward Ciaran Williams was forced to retire injured at half-time as he joined Joe O’Brien and Kevin Burke on the casualty list while Ronan Sweeney is currently unavailable as he is away in America for the summer months.

Clonguish will now need to beat Carrickedmond in their next Group 2 fixture against Carrickedmond this weekend to remain in contention for a quarter-final spot and will want to improve on this patchy performance.

After establishing a comfortable 0-4 to 0-0 lead in the early stages of the first half with their points coming from Paddy Dowd (two frees), Stephen Norton and Darren Quinn, they gradually drifted out of the picture and ended up trailing by 0-8 to 0-7 at the break.

Mostrim played some fine football to turn the game around with chief marksman Cillian Lynn accounting for four of the scores (two frees) while also on target in the first half were Brian Farrell, David Morgan, Darragh Doherty (free) and Gerard Smith.

The other three Clonguish points were all registered by Ciaran Williams and when he did not appear for the second half the Barden brothers switched with David moving out to midfield and Paul into full-forward in shrewd positional changes.

Boosted by the very fortunate goal from David with just 20 seconds gone on the changeover, Paul followed up with two great points in quick succession to leave Clonguish leading by 1-9 to 0-8 and seemingly back in control.

But Mostrim were thrown a lifeline in the 36th minute with a goal from a penalty converted by Cillian Lynn (who ended up with the impressive total of 2-5 to his credit) and were still only a point behind (1-12 to 1-11) when Brian Farrell shot over the bar in the 52nd minute.

Their other scores were registered by Darragh Doherty (free) and Cillian Lynn (free) while Clonguish managed to stay ahead with a point apiece from Darren Quinn, Chris Gordon and Paddy Dowd (free) and went close to scoring another goal when substitute Colin Farrell had his effort blocked down.

While Mostrim continued to squander some decent scoring chances late in the game they were rewarded for their sheer perseverance with the two goals in stoppage time that stunned Clonguish as they crashed to an unexpected defeat.