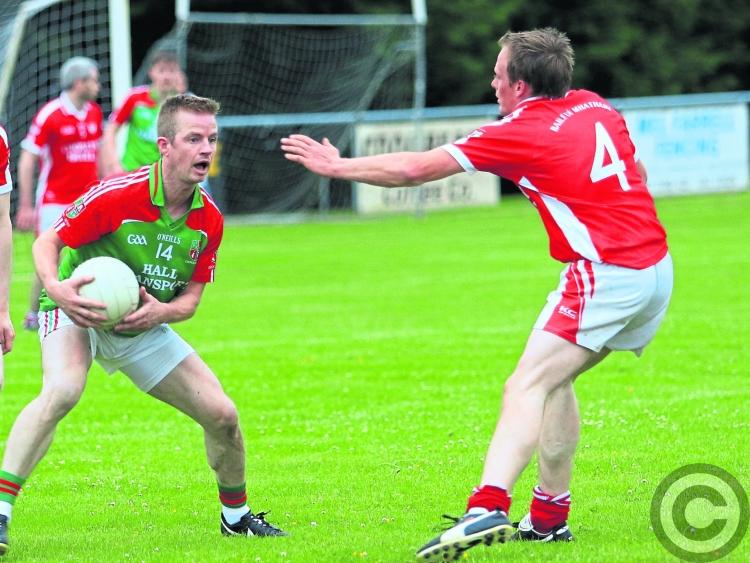 Declan Reilly on the ball for Colmcille in his attempt to evade the challenge of Ballymahon defender Matthew Daly in the Bertie Allen Cup Final at Maguire Park, Ballinalee. Photo: Syl Healy

Colmcille were worthy winners of the Bertie Allen Cup last Friday night but up until the 27th minute Ballymahon were very much in contention, at which stage there was just a point between the sides in the final of the senior football league competition at Maguire Park in Ballinalee.

It was just before the interval that Colmcille began to surge clear. Initially, they kicked two points and before Declan Reilly slammed home their opening goal.

That goal knocked the confidence out of Ballymahon and trailing by 0-6 to 1-9 at the break, they quite simply just didn’t perform in the second half; on some occasions they weren’t allowed to such was Colmcille’s sheer dominance.

It was a fine display from Colmcille and they played a lovely blend of football. Declan Reilly at full-forward was a menace throughout, Ruairi Hawkins kicked over some fine scores while the other forwards also played their part.

Paul McKeon was excellent in midfield while the defence were solid throughout; though they weren’t put under much pressure in the second half.

Ballymahon opened the scoring in the second minute with a fine pointed free from Colm Flynn. He added a second a minute later.

Colmcille were level twice with fine points from Hawkins. A beautiful score from Pedro Byrne saw Ballymahon go back in front in the fifth minute but that was the last time they were to lead in the game.

Colmcille took the lead for the first time in the 13th minute with a point from Cathal Reilly. Frees from the boot of Flynn kept Ballymahon in the game and his fifth in the 27th minute saw them close the gap again to one point, 0-6 to 0-7, but in the space of three minutes the game changed for them when Alan McKeon and Reilly hit over points before Declan Reilly found the back of the net just before the break. Half-time: Colmcille 1-9 Ballymahon 0-6.

Noel Farrell and Flynn (free) traded early points in the second half and in the 34th minute Alan McKeon got Colmcille’s second goal. Paul McKeon and Farrell landed fine points to stretch the lead to eleven points in the 39th minute, 2-12 to 0-7.

Flynn kicked over another free minutes later but Colmcille were back on the attack again. They got a third goal in the 42nd minute through Darren Mulligan. The pick of Colmcille’s goals came in the 49th minute when Paul McKeon sweetly finished to the net for their fourth goal.

Cathal Reilly, Hawkins and Declan Reilly all kicked over points as Stephen ‘Busty’ Coy’s side extended their huge lead to an unassailable twenty points, 4-16 to 0-8, by the 54th minute.

Pedro Byrne scored Ballymahon’s third point of the half in the 56th minute but Colmcille replied with a point from substitute Fergal Sheridan. He went on to grab his side’s fifth goal a minute later.

Ballymahon’s misery was compounded right at the end when Kyle Fitzmaurice picked up a second yellow card, followed by red.