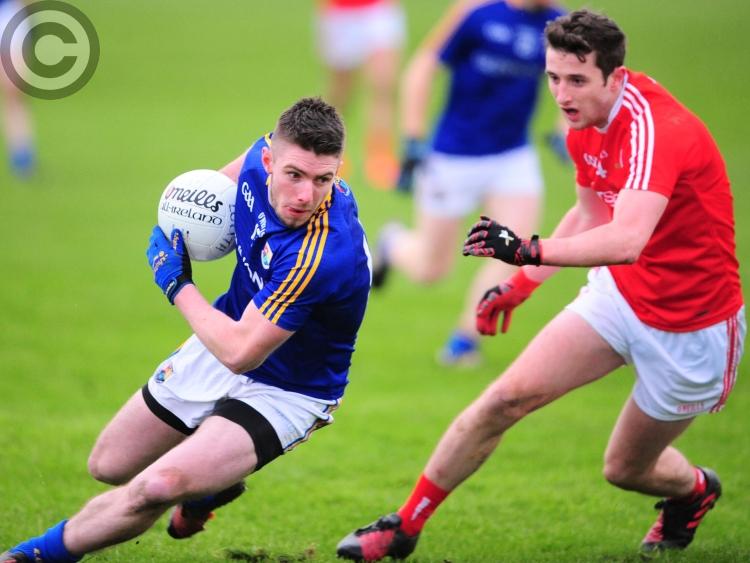 Robbie Smyth on the attack for Longford against Louth in the National Football League Division 3 game in Drogheda back in February. Photo: Declan Gilmore

Providing they can recover from the trauma of suffering a demoralising 11 points defeat (4-15 to 0-16) against Laois in falling at the first hurdle in the Leinster Senior Football Championship, the general opinion is that Longford have a decent chance of making some progress in the All-Ireland Qualifiers, starting in Drogheda on Saturday (throw-in 5pm).

Standing in their way through the ‘back door’ are a promising Louth team who have grown in stature this season and while they are difficult opponents, particularly on home ground, they still ended up losing by a fairly emphatic nine points (0-27 to 3-9) against Meath in the Leinster quarter-final at Parnell Park a couple of weeks ago.

Having said that, Louth held a slender lead with 22 minutes of the game remaining in keeping alive their hopes of springing a surprise but Meath gradually clicked into top gear in shooting a succession of superb points to book their place in the semi-final against Kildare, the latter hammering Laois by the wide margin of 14 points (1-21 to 1-7).

So where does that leave Longford in the overall picture after what happened to them against Laois!

There is a certain amount of belief that Denis Connerton’s side are capable of playing a good bit better in their bid to make amends for that terrible result at O’Moore Park on May 21.

A one match suspension ruled the regular centre-half-back Padraig McCormack out of the game against Laois but he will return to face Louth and that is a badly needed boost for the defence who were ripped apart by a razor sharp Laois attack led by the powerful Donie Kingston. Tthe knock sustained by midfielder John Keegan that forced him to retire in the early stages of the second half in Portlaoise, and who subsequently missed two league games for his club,  makes the Mullinalaghta man a doubtful starter while also on theinjured list is experienced forward Sean McCormack who is set to miss the match against Louth.

Manager Denis Connerton and his fellow mentors have to sort out the glaring problems in defence  and unless the backs tighten up a lot there could be more trouble ahead with Ryan Burns, Paraic Smith, Jim McEneaney and Eoin O’Connor all considered to be a big threat in the Louth attack.

Andy McDonnell, who did not start against Meath due to injury, was brought on with 26 minutes gone in the first half and is expected to play from the start on Saturday - probably at centrefield where he made a big impact alongside Tommy Durnin in the National League Division 3 clash between the counties back in February.

On that occasion, Longford almost snatched a draw despite struggling for most of the match but were denied by a couple of dubious decisions in a controversial finish as the bad record in Drogheda continued.

Monaghan referee Niall McKenna blew the full-time whistle a minute short of the additional four minutes that the sideline official had flashed on the board while Longford were also the victims of a harsh sideline call when holding vital possession late in the game.

A significant blow was the black card dismissal of John Keegan with just three minutes gone in the second half but it remains to be seen whether he is fit enough to exact some measure of revenge as the Leinster counties clash in the All-Ireland qualifiers for the very first time.

On the basis that Louth found it hard to overcome Wicklow 1-19 to 1-14 in the opening round of the Leinster Championship at Parnell Park, leading by just a single point with 66 minutes gone on the clock, it is hard to access the actual potential of Colin Kelly’s generally young side.

Consecutive promotions from Division 4 to Division 2 of the National League clearly suggests that Louth football is enjoying a resurgence and they will be in a fairly confident frame of mind in the quest to cross the first hurdle in the qualifiers.

Home advantage is a definite plus, with the backing of the bulk of the support, and Louth are regarded as the favourites to advance a stage further in the All-Ireland Senior Football Championship.

This is a tough task for a Longford team lacking in confidence and depending far too heavily on Robbie Smyth for the vital scores so it is going to take a much improved overall performance if a place in Round 2A is to be achieved.