Mullinalaghta hammer Killoe to go back on top of the table 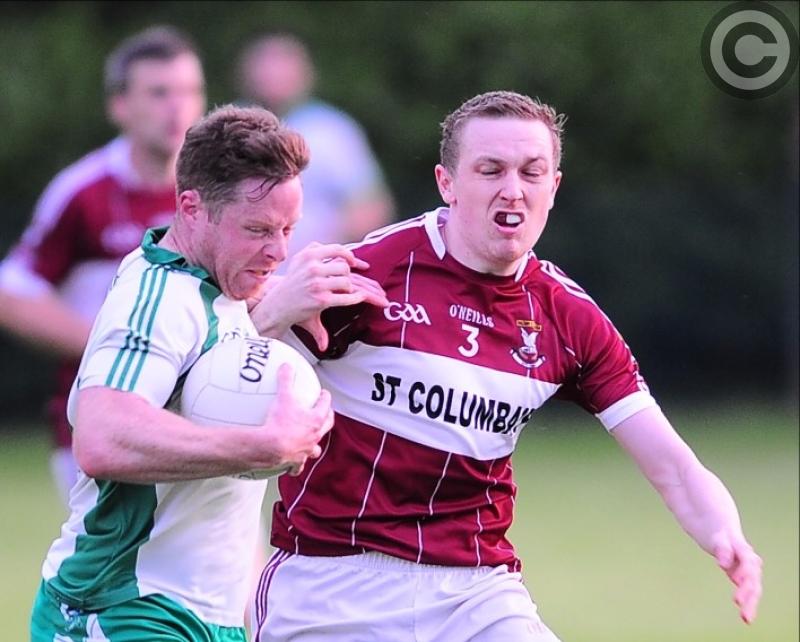 Sean McCormack on the attack for Killoe but determined to stop him is Mullinalaghta defender Patrick Fox. Action from the Division 1 league game. Photo: Declan Gilmore

Mullinalaghta St Columba’s signalled another strong championship challenge this year in producing a most impressive display to hammer Killoe Emmet Og in the Division 1 league top of the table clash at the Laurels on Friday evening last.

From the start the county champions were on top in most areas of the field. Their defence kept a potent Killoe forward line quiet for long spells while David McGivney was powerful in the middle of the park with Aidan McElligott working hard alongside him. Their attack was excellent with their full-forward-line giving Killoe a torrid time throughout the game.

It was a tough defeat for Killoe who lost Sean McCormack in the second half through injury. They did make a comeback of sorts and had cut the gap to five points by the 43rd minute but Mullinalaghta replied with a stunning goal from James McGivney.

St Columba’s  had two early chances to open the scoring before Rian Brady got the first score in the 2nd minute and James McGivney, Gary Rogers and Brady added on points as they opened up a four point lead.

Killoe got their first point in the 9th minute but Mullinalaghta replied with two lovely points from Aidan McElligott and Rian Brady as they went five ahead by the 16th minute.

The lead was seven in the 20th minute as Killoe struggled to get scores. Sean McCormack got a badly needed point for them in the 24th minute but that mattered little because one minute later Mullinalaghta were awarded a penalty after Killoe netminder Shane Fitzpatrick upended Jayson Matthews and Donal McElligott made no mistake to score a goal.

Leading by nine at the break, 1-8 to 0-2, St Columba’s didn’t let up with the scoring in the early part of the second half with Jayson Matthews, David McGivney (2 frees) and Rian Brady extending that lead to 11 points by the 34th minute.

Killoe then began to get back into the game and in a seven minute spell reduced arrears to five points with Paddy Hughes getting a goal in the 43rd minute. Their comeback though was halted in the 45th minute when the McGivney brothers combined with James finding the back of the net with a fantastic finish.

Rian Brady added his fifth point minutes after. Killoe tried in vain to get scores with a Larry Moran free their final score of the game.

Mullinalaghta, on the other hand,  were still clinical and ruthless in front of the posts.

Donal McElligott hit over a lovely point in the 47th minute which was followed by a pointed free from David McGivney. Things went from bad to worse for Killoe  in the 54th minute when Conor McElligott got Mullinalaghta’s third goal.

Jayson Matthews and David McGivney (free) scored late points as Mickey Graham’s side made it look so easy in this excellent win.