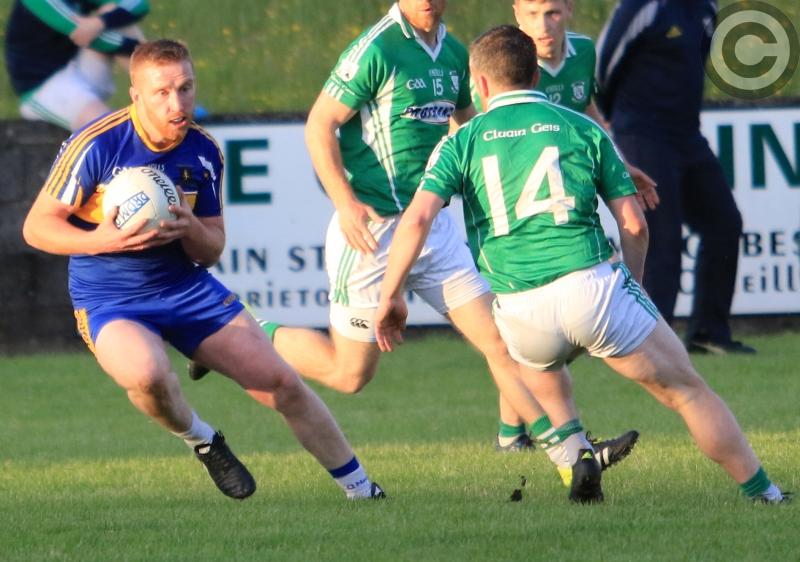 Peter Reynolds on the ball for Dromard in his attempt to evade Clonguish opponent Shane O'Brien in the Division 1 league game at Allen Park on Friday evening last. Photo: Syl Healy

A cracking goal from Ciaran Williams in the closing stages of the first half paved the way for Clonguish to score a well deserved win over Dromard in Division 1 of the All County Football League at Allen Park on Friday evening last.

Having said that, it might have been a different story had Dromard managed to convert a couple of clear-cut goal chances early in the first half with Francis McGee driving a point-blank shot against the crossbar while Emmet Masterson saw his effort to find the net deflected wide by opposing defender Gerry Moore.

But once Clonguish settled down to play some very constructive football they were unquestionably the superior side and ended up in a comfortable 1-9 to 0-6 advantage at the break after Ciaran Williams latched on to a high ball in from Darren Quinn to fire home a decisive goal in the 25th minute.

Deadly duo Williams and Joe O’Brien (clocking up a total of 1-6 between them in the first half) caused considerable damage in the full-forward-line while most prominent in the defence were centre-half-back Ronan Sweeney and Quinn, the latter  launching a number of attacks from the right-half-back position and who also got his name on the scoresheet.

Shane O’Brien landed the first two points for Clonguish while three of the six Dromard scores in the first half came from well struck ‘45s from the boot of Francis McGee with Jamsie Martin (free) and Ronan McEntire (2) also on target for the visitors.

As it turned out those two McEntire points proved to be Dromard’s only scores from play in this interesting game and they trailed by 1-12 to 0-8 midway through the second half with Ciaran Williams, Paul Barden and David Barden all shooting over the bar in adding to the Clonguish tally.

Dromard replied with a free apiece from Francis McGee and Jamsie Martin and would have been completely out of contention had a Clonguish goal attempt from Chris Gordon finished up in the back of the net as his shot was deflected against the post by the opposing keeper Sean McNerney in the 37th minute.

Clonguish lost their way for a while in the final quarter of the contest as Dromard gradually closed the gap to register four points in a row - all from frees converted by Ronan McEntire (3) and Jamsie Martin.

But the pressure was eased on Clonguish when Paul Barden done the hard work to set up his brother David for a vital point in the 55th minute.

And soon after Darren Quinn surged forward on another of his penetrating runs to fist  the ball over the bar with all the Clonguish scores coming from play.

Ciaran Williams then raced clean through to set up Joe O’Brien for a well-worked goal in the 59th minute to put the issue beyond all doubt and there was still time for Dromard to grab a consolation goal moments later direct from a close range free taken by Francis McGee.

Clonguish manager Collie Clarke and coach Dermot McCabe will be pleased with this fairly convincing victory that keeps their side firmly in contention for the Division 1 title.

But the current league campaign has developed into a struggle for Sean Hagan’s Dromard at the other end of the table despite holding the county champions Mullinalaghta to a draw in the previous round in a game they should probably have won.