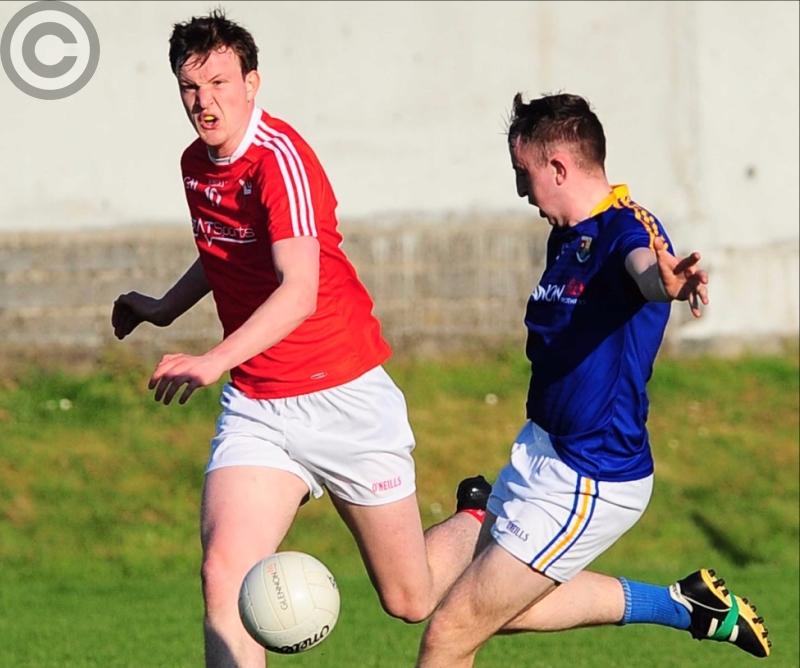 A goal from midfielder Dan O’Connell in stoppage time proved to be the decisive match winning score as Louth snatched victory away from Longford in the Leinster Junior Football Championship quarter-final at Glennon Brothers Pearse Park on Wednesday evening last week.

Louth scored their first goal in the 57th minute through substitute Mark Hoey but Longford responded well to that setback and a pointed free from the excellent Rian Brady (who registered 0-7 in total) along with a score from Killian Farrell edged them ahead by one point in the 60th minute.

But the Longford juniors  (backboned by the bulk of this year’s county U-21 squad along with senior regular Padraig McCormack who was suspended for the Leinster SFC first round clash against Laois) could not hang on to that slender lead.

Louth launched an immediate counter-attack and the ball was played into the forward line as O’Connell capitalised on a mistake to blast a powerful shot to the back of the net to shatter Longford in what has been a miserable period for the county teams with the seniors and minors also crashing out of the Leinster Championship - all in the space of five days.

In the first quarter of the contest there was very little between the sides as they were level on three occasions. Colm Giggins opened the scoring straight from the throw-in but Joe Kelly levelled for Longford before Rian Brady (free) hit over his first point of the game.

Cian Callan brought a fine save out of Longford keeper Colm Farrell in the 9th minute before Giggins drew Louth level in the 10th minute. Two great points from Padraig McCormack and Shane Kenny put Longford in front by two in the 14th minute but by the 18th minute Louth were back on level terms.

Two excellent points from Conal O’Hanlon saw the visitors go in front in the 22nd minute but in a glorious six minute spell from there until the break Longford fired over four unanswered points; Rian Brady (2), Shane Kenny (free) and Daryl Carrigy on target as the home side held a 0-8 to 0-6 lead at  half-time.

The game changed for a while  in favour of Louth in the second half as they hit four points in a row to go ahead by two points by  the 42nd minute. But Longford came storming back to enjoy another dominant period which saw them regain the lead.

A nice point from Joe Kelly and another Rian Brady point levelled matters. And then wonderful points from Rian Brady (2) and corner-back Liam Hughes saw Longford lead by 0-13 to 0-10 entering the closing stages of this entertaining encounter.

A point from Robert Brodigan and a goal from Mark Hoey saw Louth go back in front again in the 57th minute but Longford replied with a free converted by Rian Brady along with another point from Killian Farrell to lead by the minimum of margins, 0-15 to 1-11.

With time running out, there was late drama as Louth went on the attack and Dan O’Connell struck to score their second goal in stoppage time in what was a sickening blow for Frank McNamee's Longford side who should really have emerged victorious.