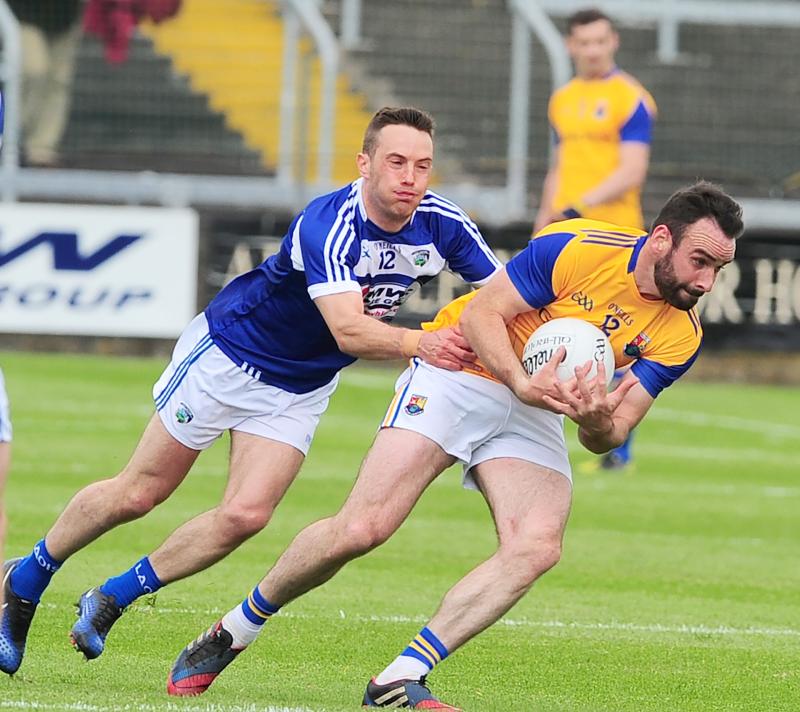 Diarmuid Masterson on the ball for Longford in this tussle with Laois opponent Niall Donoher. Action from the Leinster Senior Football Championship clash on Sunday last. Photo: Declan Gilmore

The warning signs were flashing in the fierce struggle to survive in Division 3 of the National League this season as Longford were leaking a lot of goals.

And those worst fears were realised as the defence (sorely missing the suspended Padraig McCormack) were torn to shreds in a very demoralising overall collapse in the Leinster Championship first round clash against Laois at O’Moore Park on Sunday last.

Following the extreme high of scoring a shock win over Monaghan in the All-Ireland Qualifiers last year, it was back to the bad old days as Longford let in Laois for four killer goals in quick succession - the first two in the space of a minute from the Kingston brothers just before the break.

That double disaster really shattered a stunned Longford side who were reeling on the ropes as they ended up trailing by nine points (2-10 to 0-7) at half-time.

Laois then delivered the knock out blows immediately on the changeover as they struck to score a couple of more goals in a decisive two minute spell that put the issue well and truly beyond all doubt.

Alan Farrell finished off a great move to find the back of the net in the 39th minute and the nightmare continued for poor Longford as Paul Kingston found a way through to fire home the fourth goal in the 41st minute to leave Laois in a staggering 15 points lead.

That did not seem possible when Longford battled back to close the gap to just two points after  recovering really well from a bad start.

Longford’s opening point came from a free converted by Robbie Smyth in the 6th minute, after Sean McCormack was impeded in his goal attempt that was saved by the opposing keeper Graham Brody, and the other two scores were also notched by the Abbeylara ace who certainly could not be faulted for the demise of the county on this occasion.

Sharpshooter Smyth was a constant threat whenever he received the ball and  Longford's best player on Sunday last  ended up with the impressive total of 11 points (seven frees).

Robbie registered six points in the first half, with Sean McCormack also on target, and a big turning point materialised in the 33rd minute when Barry McKeon clearly shot over the bar when a goal was there for the taking but his effort was remarkably waved wide by the umpire and even after the referee had consulted with the linesman.

Trailing by 0-10 to 0-7 at that stage after a point from John McLoughlin had eased the pressure on Laois, and particularly their suspect defence, the sides would have been all square had McKeon planted the ball in the back of the net instead and even a point for Longford then might have stopped what happened next.

Laois launched an immediate counter-attack which yielded a cracking goal from Paul Kingston in the 34th minute and moments later his brother Donie the dangerman directed the ball into the corner of the net past Paddy Collum.

Taking off Diarmuid Masterson (who was on a yellow card) in the closing stages of the first half was a bit of a panic move by the members of the management team, considering the physical presence of the Dromard man.

The decision to play regular attacker James McGivney at centre-half-back unfortunately failed to make the desired impact but at least Padraig McCormack will be back for the first round of the qualifiers on Saturday June 17th.

Plenty for the manager Denis Connerton to think about in the meantime as his Leinster Senior Championship jinx struck again and this was a dismal setback that must be hurting badly.

Things can only get better as it all went wrong for Longford. Midfielder John Keegan was forced to retire injured in the early stages of the second half while the losers were guilty of shooting a total of ten wides as compared to just four for Laois.

A three minute stoppage ensued following the Keegan injury and when play resumed the game was quickly all over as a contest as Laois got through to score two more goals with Donie Kingston involved in these slick moves.

Longford went 22 minutes without a score  before Robbie Smyth converted a free in the 48th minute and four more points (two from play) followed from the chief marksman as his side battled it out  to the bitter end.

As it turned out, Laois also outscored Longford in the second half, 2-5 to 0-9, with Liam Connerton, substitutes Darren Gallagher and Conor Berry, and starting forward Ronan McEntire shooting a point apiece.

Laois kept the scoreboard ticking over with points from Colm Begley, Darren Strong, Donie Kingston (free), along with a brace from John O’Loughlin, and now move on to meet Kildare in the Leinster quarter-final on June 4.