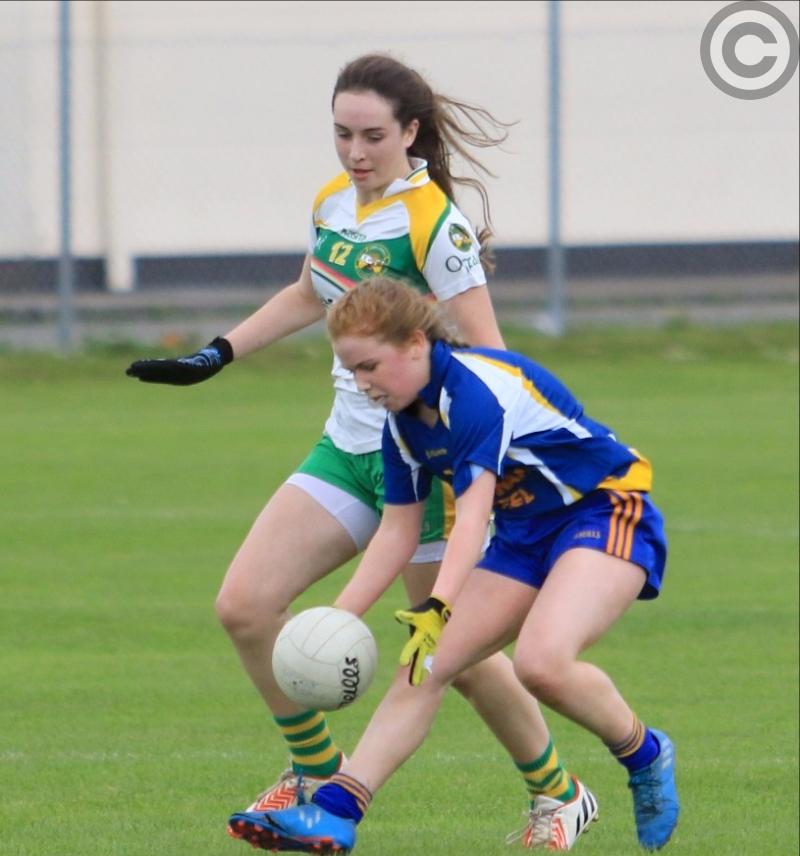 Aoife Donnelly (St Helen's) pictured in action for the Longford U-14 ladies in the Leinster 'B' Football Championship Final against Offaly on Sunday last. Photo: Syl Healy

Trailing by 8 points after just eight minutes, the Longford U-14 girls staged a great comeback to turn the game around and went on to win the Leinster ‘B’ Final against Offaly on Sunday last. At a breezy Clane GAA grounds, Co. Kildare this title decider was played at a ferocious pace and thrilled the large crowd in attendance.

From the throw-in Offaly went down the field and immediately found the back of the net.  This was closely followed by a second goal and it looked like a heavy defeat was on the cards.  Longford couldn’t get the ball out of their own half and were totally outplayed all over the field.  Two Offaly points followed and only for a couple of efforts going wide things could have been even worse.

Longford’s first score came in the 12th minute, a point from Melissa O’Kane. Grace Shannon scored a second point for Longford and O’Kane then took on the Offaly defence and buried the ball to the net for a great goal.

Things were now looking up for the Longford girls but the sucker punch of a third Offaly goal brought them back in control.  Lauren McGuire scored a point and after a few penetrating moves Longford got a second goal finished well to the net by Molly Mulvihill.  Offaly added three more points to leave the half-time score at 3-5 to 2-3 in favour of the faithful county.

In terms of attitude and self-belief a totally different Longford team emerged for the second half.  Great credit is due to manager Enda Duncan and the other mentors  because their charges really took the game to Offaly and the scores began to flow.

Player of the match Lauren McGuire and her midfield partner Grace Shannon (captain) were now dominating and this helped the defence to get on top and some great tackles and turnovers were produced.

Longford outscored their opponents by 3-7 to 0-5 in the second half which reflected their dominance with the goals coming from Lauren McGuire, Molly Mulvihill and half-time substitute Laura Valentine.

Considering the terrible first quarter that the Longford girls endured this was a remarkable turn around, a really hard fought and deserved victory.  The game was played in a great sporting manner and apart from a few very strange refereeing decisions it was a great spectacle of Ladies football. Longford were denied a clear penalty and Offaly were awarded a dubious one which was well saved by goalkeeper Rian McGrath.

On an otherwise dark weekend for Longford GAA these young, talented girls shone through.  They now look forward to an All-Ireland Semi-Final and should approach it full of confidence.