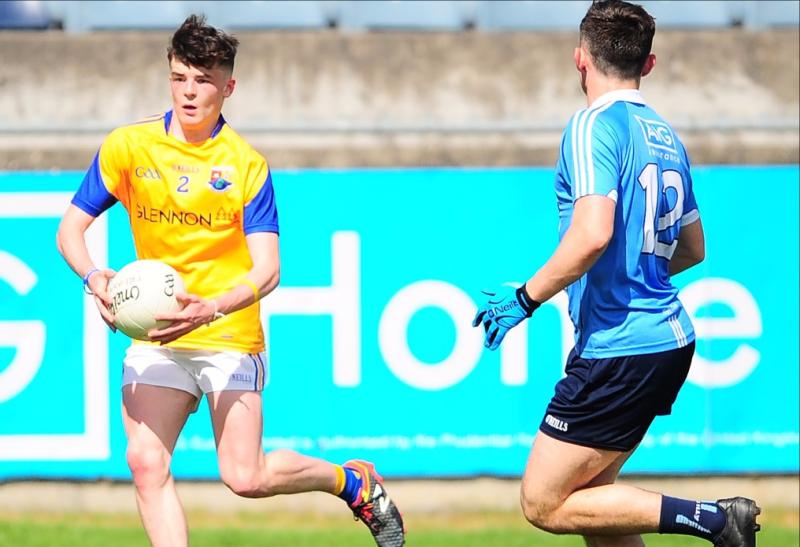 A powerful Dublin side  gradually dismantled the disappointing challenge of the Longford minors who suffered a heavy defeat in making their exit from the Leinster Championship. The very wide margin of 25 points separated the sides in the finish at Parnell Park on Saturday last as the far superior home county cruised into the last four.

From the moment they opened up a lead in this quarter-final clash, deadly Dublin were relentless in attack and clinical in front of the posts and all their 18 scores came from play which is a fantastic achievement.

Longford just couldn’t cope with the onslaught and were outfought and outmuscled in all areas of the field. Dublin were also able to use their strong bench to great effect and Longford didn’t have that luxury.

In a very tight opening quarter Longford defended resolutely but also had chances which they failed to convert, kicking four wides to Dublin’s one, and that was a blow to their confidence as they needed to make a good start against the red-hot favourites.

Longford were dealt a blow in the 13th minute when defender Ciaran McKeon was dismissed for a black card he received from the referee following a tussle near the sideline.

Darragh Conlon got the game’s first point for Dublin in the 14th minute but back came Longford with a point from Joseph Hagan.

Dublin tried to get a grip on the game but Longford defended very well and thwarted them on a number of occasions. But a brace of points apiece from Niall O’Leary and James Doran put the home side ahead by five by the 23rd minute.

That lead was extended to eight in the 25th minute when a poor kick-out went over the line, the sideline ball was played to Ross McGarry and he made no mistake in finding the back of the net for the first goal.

With Dublin now very much in control Longford struggled to gain any possession as they went in at the break trailing by 1-6 to 0-1.

On the changeover Longford keeper Jack Fox made a fine save with his feet to deny Ciaran Archer another goal for Dublin before Longford, after going 19 minutes without a score, got their second point through Shane Farrell.

Dublin replied with a fine goal from Sean Hawkshaw and then Robbie O’Connell shot over the bar for the third Longford point.

Dublin scored their third goal in the 43rd minute and Longford just couldn’t stop them as the floodgates opened.

In the 49th minute substitute Adam Byrne found the back of the net with a powerful shot to put the Dubs ahead by 17 points and four minutes later Ross McGarry got his second and Dublin’s fifth goal.